THE Cowboys swept the Eagles in 2018. That was a classic case of winning a battle, but losing a war. Make no mistake, from a long-term perspective, the Cowboys have already lost this war, because the Eagles have effectively shut any Super Bowl window that the Cowboys may have had.

I saw this financial bind coming, I just didn’t think their players would trigger it. There was no way to see this coming. Had you told me in June, that Dallas would be going through this in 2019, I’d have dismissed it as a delusional fantasy, from a rival fan. I’d have said “You’re playing at FARCE! There’s no way the Cowboys players would derail their own team in that fashion!”

Yet here we are. So then, why do I credit the Eagles with what is happening in Dallas. How does QB Carson Wentz signing his contract, derail an entire franchise 1,500 miles away? How can the two things be connected? Surely I’m grasping at straws, right?

I’m going to keep this VERY simple. I’m going to draw three Simple Lines of Reasoning, and make it so that anybody who’s literate will understand it. There is no rocket science here. There is no “fuzzy math”. There is no smoke, nor mirrors. Here we go.

(FACT) Wentz signs his deal in Philly for 32M$ per year on his extension.

(SLR) Dak Prescott in Dallas realizes that he hasn’t missed any games, he has won two division titles, he has played in actual playoff games, and head to head he “owns” Wentz. Prescott thinks he deserves more money.

(FACT) At the end of 2019 the Cowboys have to re-sign both Prescott, and Amari Cooper. If Prescott and the Cowboys don’t reach a deal during the season, Prescott will be Franchise tagged at about 33.9M$ per year. Cooper will command between 18 and 20M$ per year, and is a MUST HAVE, to legitimize Prescott’s tagged cap figure. On the low side, that comes in at 51.9M for those two players in 2020.

(SLR) Ezekiel Elliott has two years remaining on his rookie deal, but realizes that all of his potential extension money is going out the door NOW. Especially if he gets hurt, or has already been hurt, and is hiding it from the team to keep his value from depreciating. Powerbacks don’t have long NFL careers. If he or his doctor already sees a coming issue, he HAS TO hold out now. Once Prescott and Cooper have their checks in hand, there’ll be no more room at the feeding trough in two years.

(FACT) The Cowboys could’ve locked Prescott up for about 27M$ per year last year, but they didn’t. Prescott being paid less than QB’s Russell Wilson (35M per year, 1SB win, 2 appearances), Ben Rothlisberger (34M, 2SB wins), and Aaron Rodgers (33.5M, 1 SB win), was one thing. However, when Wentz with ZERO playoff wins, signed for 32M, it changed the valuation metrics.

(SLR) Prescott could sign with the Cowboys for a one year extension, and then once the new CBA is done, (with a much higher cap figure), then giving him a deal of 35M to 42M would be an easy lift. However, salary figures are ego driven. It’s not just about how many dollars a contract is worth, it’s also about what percentage of the cap can you get a team to commit to just you as a player. Making 34M of a 188M cap (18.0%), is less valuable than making 45M of a 260M cap (17.3%). There’s a difference of 9M in dollars, but it’s not about the dollars. Prescott can make up that 9M on an endorsement deal for Ford pick-up trucks, or Charles Schwab investments or whatever. It’s about being able to say “I mattered this much.” “I was this important to them.” “Once upon a time, I was the top. I was the pinnacle.” The QB that had to wait four rounds to hear his name, wants to say that he made it. In that regard he HAS TO beat Wentz’s deal. It otherwise invalidates beating his stats. 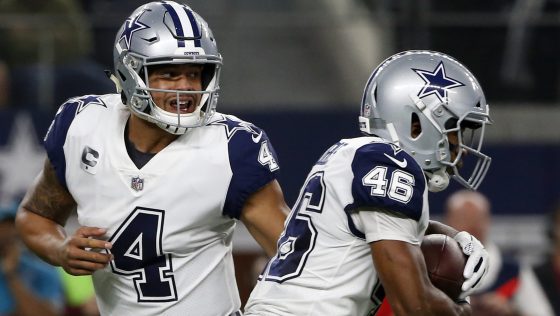 People keep missing the forest for the trees. We live in age of loud voices, too much make-up, and movement for the sake of movement. What are you saying? Who are you underneath all that? Where are you really trying to go? Nuance now seems lost on most people. People disregard the small details, even though they influence everything.

Like the way one small signature in South Philly, tore down an entire franchise in Dallas.

THIS morning around 2:30, while watching “Speak For Yourself” I heard something that irritated me, mostly because it’s flat-out untrue. It was said that Cowboys owner Jerry Jones holds all the leverage in regards to the holdout of Cowboys RB Ezekiel Elliott. Given what just happened with former Steeler/current Jet RB LeVeon Bell, this represents old thinking.

The thinking is, because there are two years, not one year, remaining on Elliott’s contract, the Cowboys can sit pat and eventually Elliott will either return on his current deal, or sign the Cowboys “take it or leave it” offer. That thinking is shortsighted and focuses on a commodity based mindset. It does not take into account, the entirety of the picture here.

Look, every sports show that talks about this issue, will tell you about what the player stands to lose here. No one seems to be thinking much about Elliott’s leverage, or what the organization stands to lose. Even more pressing is what Jones stands to lose personally. Oh yes. He has skin in the game. Literally.

Remember when Jones forced out head coach Jimmy Johnson? The reason was largely because Jones felt that he didn’t get enough of the credit for building the Cowboys into a two-time (1992 and 1993) Super Bowl winner. Jones wanted to prove that he could win one without Johnson, and hey, Cowboys won another Super Bowl in 1995 under head coach Barry Switzer. However, everyone with at least two brain cells said “Yeah, but those are all still Jimmy’s players. Barry and Jerry just rode shotgun.”

So from that day to this, Jerry Jones has been on a quest to win one without ‘Jimmy’s players’. The problem is that Jones is 76, and there are fewer days ahead than behind. He is literally running out of time to get what he wants. And therein lies Ezekiel Elliott’s leverage. It’s TIME.

Due to Jones race against the clock, he has the Cowboys built to win now. Their window is now. Elliott’s holdout derails that, because the team goes as he goes. If Elliott no show, he no go. He no go, they no go. That burns a year of Jones’s life, over a sum of money he’d be willing burn to warm his feet. Jones needs Elliott more than the money. The money is a meaningless commodity. What’s precious is his remaining time.

But the game of one-upmanship must be played right?

Except… The Cowboys have already had Morris. He was on the roster in 2016 and 2017. He was a teammate of, and the back-up to Elliott, before being released a year ago. If they really wanted Morris, they could have kept him. They didn’t. Could have had him months ago. They didn’t. So the Cowboys gallivanting around with some guy they settled for, won’t light a fire under Elliott. How could it? Why would it? Even Morris knows he’s just a seat warmer.

There’s only so long left for Jerry to get what he’s spent decades craving, and Elliott is clearly the key to that. Whether Jones even has a chance at it, depends on him not playing the game of one-upmanship.

Then again, the game could go on and keep yielding the same old result: