REMEMBER June of 2019, when I wrote that QB Carson Wentz’s new contract wrecked the future for the Dallas Cowboys? If you don’t here’s the link. In it I explained why the Eagles signing their QB, meant a long-term downturn for the Cowboys. Things I said in that article, were confirmed in an article I wrote that following July. Here’s that link.

Understand, I live in Philadelphia. Never been to Dallas. Never even flexed shoe leather in the state of Texas. I have no internal sources on the Cowboys team. But Skip, this was a prophecy that called ahead, and told everyone to save the date!

As of now, 6:30a.m. Sunday May 3rd, 2020, QB Dakota Prescott has yet to sign his 33M$ franchise tag, because he’s been saying all along that he wants 40M$ per year. In response, the Cowboys ran out and signed recently released Bengals QB Andy Dalton, to a 1 year, 7M$ deal. While Dalton is a bargain at that price, and an upgrade over back-up QB and preseason Hall of Famer Cooper Rush, make no mistake, this was meant as a shot across Prescott’s bow.

Meanwhile, Cowboys fans are lapping this up like kitties to cream. That’s because they aren’t seeing the bigger picture. They frequently take their eye off the ball, lose their place, and then wonder how they keep ending up in that same spot. Cowboys owner Jerry Jones distracts them with something shiny, and (yet again), everyone forgets that there was a plan. 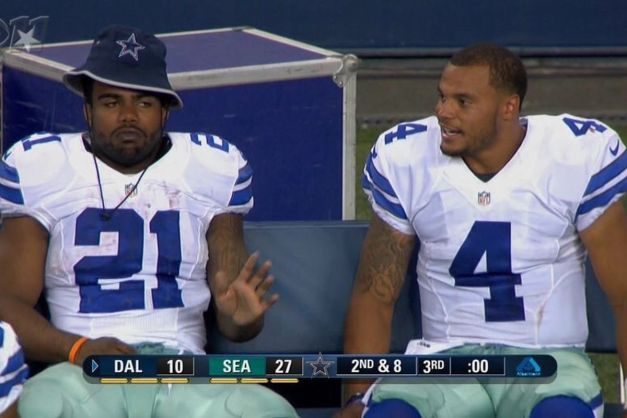 Funny thing is, it’s very likely to (yet again) blow up in Jones’s face. Last year during RB Ezekiel Elliott’s hold-out, Jones taunted Elliott when he praised RB Tony Pollard with the quote “Zeke who?” after Pollard had a decent showing (5 carries 42 yards) in a preseason game. Elliott continued his holdout, and when Jones caved, Elliott was given a 90M$ contract.

Having seen that playbook, Prescott has to know that he should sit until Jerry Jones caves. Either that or not sign, sit out the year, and show up in 2021 wearing a Redskins, Bears, Colts, Buccaneers, or Titans jersey. Meanwhile, the Cowboys would have to start their search for a franchise QB all over again.

Speaking of playbooks! The Cowboys have changed their head coach, but they’re running the same offense as before, with last year’s coordinator. If Prescott signs quickly, that offense can hit the ground running. If Dalton starts, then he has to learn the system from the ground up. The Cowboys are in “win now” mode, but starting Dalton would derail all of that, right from the start.

No OTA’s, and no mini-camp, with a shortened training camp this year. Not a good look for a team with a new head coach. Especially in a division that features a division champ that won while they were wounded, but now is healed up, and has added weapons.

The Eagles are not in “win now” mode. The Eagles are in predator mode. They don’t have to worry about a learning curve, and a short camp works in favor of a roster that has seen too many recent injuries. While the short camp situation works against other teams, it actually works for the Eagles. So it’s not minus one Cowboys, zero Eagles. It’s minus one Cowboys, plus one Eagles. Just on preparedness alone.

For the Cowboys to have a chance, Jerry needs Prescott to start. Otherwise, 2020 is another 8 – 8 record, and possibly third place finish, instead of a fight for #1.