NICE MOVES. HOW ‘BOUT ANOTHER?

GIVEN all the talent added up front during this offseason, and with him staying home for OTA’s, the release of DE Marcus Smith didn’t really come as a shock to anyone. Drafting DE Derek Barnett could be seen as getting an infusion of young talent. That said, you don’t add a veteran like DE Chris Long, and trade for a DT like Timmy Jernigan, if you’re happy with what you already have.

Trading away OL Allen Barbre, on hand has me a little nervous, because his ability to start at G and RT were nice assets to have. On the other hand, it says the Eagles feel good about not just the depth at G, but that there’s also someone to believe in at reserve OT.

The early hope is that I was wrong last year about OT Halapoulivati Vaitai, because if the Eagles are pinning their hopes on undrafted rookie Victor Salako, or Taylor Hart who was a DT last year, we could be in some real trouble. Until I see otherwise, I’ll stick to my assessment of Vaitai as a stiff and heavy-footed turnstile.

The move I’m still waiting on, is trading RB Ryan Mathews. Given the additions to the RB position that the Eagles have made, keeping Mathew’s salary on the books is just silly. Besides, with the injury to the Baltimore Ravens starting RB, now would be great time to deal them Mathews.

Initially the idea would be to try and get a CB out of them, but the Ravens wouldn’t be willing to part with anyone we’d want. We might however, be able to get an OT out of the deal. OT De’Ondre Wesley wouldn’t be a bad swap at all. At best, he sits behind Jason Peters and Lane Johnson for a year or two. At worst, he’s a camp body who adds competition to what we already have. In any case we’d get to dump Ryan Mathews salary. 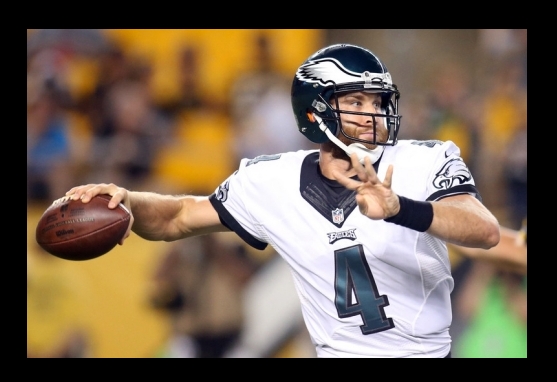 ITCHING to get to the games that count, but there’s two more articles to write before I can do that. Here’s the first one.

WR Paul Turner! Paul “Mother******” Turner! At least that’s how some Jets players will think of him as they turn in their playbooks on Saturday. Last night while Turner (6 – 66 – 11.0 – 0 – 0) was making fools out of New York’s entire secondary, he stopped and took a moment to return a punt 71 yards on their special teams unit. He made sure there was enough humiliation for everyone. Such a nice boy.

Rookie RB Cedric O’Neal (15 – 32 – 2.1 – 0 – 2) led the team in rushing as worked on his Tim Hardaway impersonation. Unfortunately it’s extremely hard to cross someone over with a football. So putting the ball on the ground so much…maybe, might have been a mistake.

Defense yet again took a page from Bruno Mars and Uptown Funk: “If we show up, we gon’ show out!” DE Steven Means (1 – 1 – 0 – 0), you have to love that guy. There is no way we can cut that guy. I have no desire to see him in a giants, Cowboys, or Redskins jersey. We have to find a way to keep that guy.

I need to also mention DE Marcus Smith (2 – 0 – 0 – 0) and S Ed Reynolds (2 – 0 – 1 – 0). I wasn’t a fan of when we drafted either player, and neither seemed to find his way under the last coach. Under this new coaching staff however, both men have shown real promise. Just goes to show you that superior teaching can release locked potential. I hope to see both players make the 46 man roster.

THAT’S IT! Next time I post one of these recaps, it will be after we beat Cleveland.

CAN MARCUS SMITH BE REACHED?

CHIP Kelly says that rookie OLB Marcus Smith needs to be more productive. Despite playing more than 70 snaps against the Patriots, Smith logged only 1.5 tackles. While Smith wasn’t brought here to fill up a boxscore, spending a first round pick on him means they need to get him to make plays sooner rather than later.

Soon after this year’s Draft, Kelly pooh-poohed the idea that Smith might have been a reach. However with Smith so far playing like the early 3rd rounder he was projected as, you wonder if Kelly may be rethinking that stance.

I said in this week’s Breakdown: “Chip Kelly is about to learn the value of having elite talent at this level”. Specifically because his rivals have added some and he hasn’t.

You see any earth shakers there? Me either. In fact, all I see is one starter.

It is waaaay too early to call Smith a bust, or to even start that conversation; and NO that isn’t what this is. That is not being said here, so let’s not go there.

What is being said here, is that Smith was a reach who was graded where he was, (late 2nd -4th round) by most teams for a reason. His lack of production is indicative of that. Particularly because even with such a low grade, he was selected early despite plans to switch him from DE to OLB. (He was a rush LB in 2011, and DE in 2012 and 2013). Even by itself that switch-up is enough to classify him as a project; and you don’t take a project with the 26th pick.

FIRST round Draft pick, Marcus Smith is a player that I’ll be keeping an eye on once Training Camp begins in a couple of weeks. His chances of taking a starting OLB spot away from Trent Cole or Connor Barwin, are likely almost nil, but then he wasn’t drafted to do that in 2014.

During OTA’s Smith wasn’t just Barwin’s back-up, Smith was 3rd string. That had more to do with letting him pick up the system slowly, and allowing him to watch players who played in this system last year. There’s no need to rush him, good things take time.

Actually despite me not being 100% sold on Chip Kelly, I really dig his approach to the OTA’s. Many NFL coaches use them to sift for a pecking order. Kelly is doing no such thing. His whole approach is to just use OTA’s as an assessment period.

In the meantime, Smith is being said to be doing all the little things in terms of his study and practice habits. Coaches are guardedly optimistic about what they’ve seen, saying that he moves well and has so far not balked at anything he’s been asked to do with regard to responsibilities within the scheme.

Then again that was in shorts, and without hitting. I can’t wait to see what happens when that all changes.

THE Eagles 2014 Draft has gotten off to a poor start. Spin it how you like, but anytime Eagles fans are walking around with an air of ambivalence you know that something doesn’t pass the smell test.

The bottom line is this guy was a reach pick. Reach picks are fine, if you’re mostly solid or if you’re swinging for the fences on a boom or bust guy who could change an entire franchise should he pan out.

This was not that situation. This is not that guy.

We needed a legit pass rusher and instead we got the standard senior performer. By senior performer I mean a guy that the school pushes or schemes to show off in order to pad his stats and get him drafted so the school can say to new recruits, “Hey, look at the percentage of our players that get drafted!”

When a guy is truly special, you can see it as soon as he gets the majority of the starts in a year. Or his improvement will be steady. With senior performers you get guys who wallow in mediocrity even as juniors and then -BOOM- numbers as a senior. It’s harder to do with guys in the Secondary, but positions like RB, WR, TE, and LB are rife with it. It’s also (I think), why so many top picks turn out to be flops.

Look, I’m not saying this guy is bad player. I’m just saying we could have had him later and not passed on players who truly deserved the spot in history that he now occupies.

I hope it gets better.

My best friend and I watched the Draft at the South Philly Bar & Grill down Passyunk. I ordered a Philly Tap Water (awesome drink), 2 cheesesteaks and I gave away some EAGLEMANIACAL tee-shirts to fellow fans who also showed up to watch.

The annual strokefest that is the Draft was going according to formula, with every pick being a blah-blah “good pick” or a blah-blah “solid pick”. Mel Kiper had his poor Draft evaluation of Ray Lewis thrown in his face, with now HOF Ray sitting just one guy away. It was fun.

When the Eagles pick came in, we were all on our feet. Pryor was gone, Clinton-Dix was gone, Barr was gone, Cooks was gone, and Ford was gone. Who was left? Whoever it was, we all were expecting the pick to be a great one.

Then Marcus Smith was announced. You could have heard a flea fart from across the street at Capitolo park. I haven’t heard such eerie, dead silence in Philly since Mayor Nutter closed the city in preparation for Hurricane Irene in 2011.

Murmurs broke out and I expected full on bitching to commence in 3-2-… But it never came. It’s like the spirit had been gut punched out of the bar. People settled into drinking and a couple guys schlepped over to the beer pong table. You could hear the ping pong balls, but neither man was talking. I ordered another Philly Tap Water, my friend ordered a Pepsi. The night was over.

I don’t know whose idea it was to draft this guy, but barring an amazing next 2 days, that person should be out of a job come Monday. Aside from Danny Watkins, have you ever been more underwhelmed about a Draft pick?

More to the point, why did we reach so badly for this guy??? CBS Sports had a solid  2nd round grade him. Not a 1st – 2nd grade, a solid 2nd. Draft Countdown had him as a 2nd – 3rd. NFL.com Scouting had him down as a 3rd – 4th. The only thing about him that says 1st rounder, is his Draft history.

Let me go you one better. When you pick a guy in the 1st you should expect him to contribute heavily if not start, in that same year. Did anyone see anything that said “Yeah. Sit Trent Cole down, so this kid can get out there”? I sure as hell didn’t.

It’s 3:21 a.m. now. I came home and went looking for video of this guy. This is video of him in a game which was a runaway for his team. Observe how consistently dominant he is:

AND THIS IS HIS HIGHLIGHT REEL! So you see my frustration? This next 2 days had better be some of the most bang-ass drafting us Eagle fans have ever seen. Because between this and Jacksongate 2014©, the Front Office is looking less and less like they know what they’re doing these days.