NICE MOVES. HOW ‘BOUT ANOTHER? 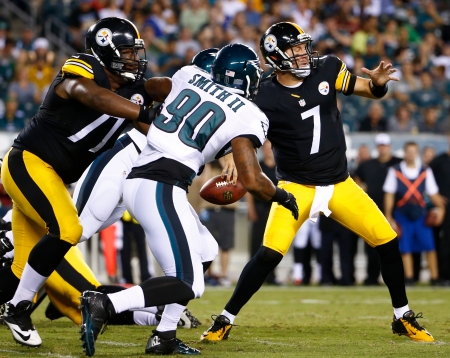 GIVEN all the talent added up front during this offseason, and with him staying home for OTA’s, the release of DE Marcus Smith didn’t really come as a shock to anyone. Drafting DE Derek Barnett could be seen as getting an infusion of young talent. That said, you don’t add a veteran like DE Chris Long, and trade for a DT like Timmy Jernigan, if you’re happy with what you already have.

Trading away OL Allen Barbre, on hand has me a little nervous, because his ability to start at G and RT were nice assets to have. On the other hand, it says the Eagles feel good about not just the depth at G, but that there’s also someone to believe in at reserve OT.

The early hope is that I was wrong last year about OT Halapoulivati Vaitai, because if the Eagles are pinning their hopes on undrafted rookie Victor Salako, or Taylor Hart who was a DT last year, we could be in some real trouble. Until I see otherwise, I’ll stick to my assessment of Vaitai as a stiff and heavy-footed turnstile.

The move I’m still waiting on, is trading RB Ryan Mathews. Given the additions to the RB position that the Eagles have made, keeping Mathew’s salary on the books is just silly. Besides, with the injury to the Baltimore Ravens starting RB, now would be great time to deal them Mathews.

Initially the idea would be to try and get a CB out of them, but the Ravens wouldn’t be willing to part with anyone we’d want. We might however, be able to get an OT out of the deal. OT De’Ondre Wesley wouldn’t be a bad swap at all. At best, he sits behind Jason Peters and Lane Johnson for a year or two. At worst, he’s a camp body who adds competition to what we already have. In any case we’d get to dump Ryan Mathews salary.