EVERY year I repeat this one. We never do it, and we always should. (Every team should, actually.) Fuck it. I will bang this pot until someone hears me! There is no tactical advantage to using a Punter to hold on Field Goal attempts. Unless you’re Pat McAfee or Sav Rocca, you probably don’t offer much as an athlete on a football field. A back-up QB however, offers plenty.

A QB playing holder makes every FG attempt a potential opportunity for a fake. While that can be said of anyone holding, a QB’s ability to deliver ball (even under pressure), makes that potential fake all the more dangerous, and all the more real.

The most important thing it does, is it forces teams to focus on covering both Ends and both Wings, instead of trying to block a kick. Wait. Let me back up.

Because Special Teams is so rarely talked about, most people don’t know the positions. The five members of the line are T, G, C, G, T. That part you already knew. Outside of the T’s are the TE’s. Still pretty standard stuff. The players outside of the TE’s are Wing Backs (WB). Usually those are WR’s or RB’s who are good blockers, because the emphasis is on protection.

While there are always six players eligible to catch a pass on any FG attempt, not having a player that can deliver a pass, makes that threat practically toothless. Unless someone isn’t covered. A QB on the field however, gives the offense (and that’s still what it is), a player who can routinely deliver an accurate pass, even to a covered man, even with pressure in his face. No P can match that.

I’ve spent years saying that we should use WR Greg Ward as the Holder, given his QB background, and his WR legs. However, if we were to trot QB Gardner Minshew out there, opponents would think “Well what the happy fuck, is this horseshit?” At which point their focus is more on making sure that our TE’s and WB’s don’t get loose for six, than on giving up three.

And after all that, after everything you just read, you just read the REAL payoff. It’s a more relaxed Kicker who doesn’t feel like he needs to rush, because the defense is trying harder to cover, than they are to block. What would relaxing K Jake Elliott be worth to you? Yet all it would cost, is swapping out a P for a QB. That’s it.

And of course, every so often we can actually run a fake. Just to let opponents know that they need to be afraid, and stay that way.

I’VE said this before and I’ll keep saying it every year, until we do it. If you want to increase the accuracy of the Kicker, use a QB as his Holder on Field Goal attempts. 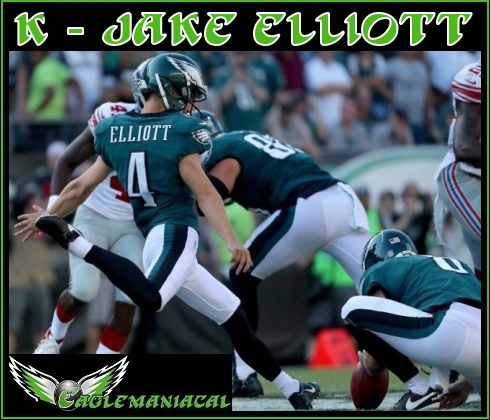 That of course has to factor into him working to get his kicks away sooner. However, if given a second or second and a half longer, to dial in… Hey, that can only help him out. But what does that have to do with a QB playing Holder?

If a QB is the Holder, it means that any FG attempt could be a fake. It means every FG attempt could be a fake. (Especially with Doug as the coach.) If the kicking team packs the line, then the defense has to crowd them and gets to attempt a block. However, if it’s 4th and 4, and the wing players line up outside, then the defense has to pull potential blockers away from the kick, to cover what could otherwise become a completely uncovered receiver.

This tells the Kicker that he has a little more time and breathing room for his kick. And it would all stem from using a QB as the Holder, as the Saints did here with QB Luke McCown

This play might not have happened had the defense identified and respected the personnel that was on the field.

We need to adapt and adopt tactics which make teams uneasy about how they approach US. At the same time, these seemingly small wrinkles can supply our own players with a greater sense of calm and confidence.

REPORTS out of EAGLES practices say that rookie Kicker Carey “Murderleg” Spear looks bad compared to veteran Alex Henery. This could be why Spear has so far not gotten an opportunity to swing his leg during live action so far.

I call bullshit on that.

Before I go into it, let me say that I’m not surprised that Henery has won this job. I said he would (SEE HERE). I wasn’t happy about it when I said it, but I could see the handwriting on the wall; and when I see something coming, it’s my job to share it with you whether I like it or not.

I thought that Spear would at least get a chance to lose the job. Instead it looks like Chip Kelly is fine with releasing a guy who he hasn’t even looked at in live fire. I mean if Henery can look good in practice but suck in games, why not take a chance that Spear may be better when the lights come on? It’s unlikely, but that’s partly what preseason is for, right?

Of course if Spear out-shined Henery, the Kicker position would suddenly be a decision that has to be actively weighed amidst a bunch of others. This may be drama that Kelly would rather avoid. However as far as most of us fans are concerned, Kicker has been a decision worth actively weighing for years now; because while Henery’s career percentages are stellar, he never fails to fail in big moments.

The idea of a Kicker who only misses important FG’s is terrifying. You want a Kicker who’s clutch, but we don’t have that. Currently we have the Tony Romo of Kickers. Yes, we have Tony Romo! The guy who statistically should be the answer to your prayers, but who in clutch moments is the biggest liability on the roster. Yeah, we have that guy.

My hope was that Spear would push Henery, and that through mentoring Spear, Henery would go back to doing the little things. That didn’t happen. In fact if there was anything for Henery to take away from this, it’s that no matter how many times he fails us, there will always be a home here for Tony Romo.

WANT to hear something crazy? Here in 2014, there are still NFL fans who regard Kickers as unimportant. Anyone who says that is only showing how little they understand this game.

For instance, last year the Eagles scored 442 points, 114 of which were scored off the foot of K Alex Henery. (BTW: That’s 25.7%) Besides that, having a Kicker who is clutch, can win you a close game. Having one who is not (New Orleans 26-24) can cost you dearly. Kicker is an extremely important position to get right. Contrary to popular belief, it is NOT the least important position in football.

That’s probably why Special Teams coach Dave Fipp is on a mission this offseason. While Henery was great in some areas, he was sorely lacking in others. As Fipp tells it “The biggest challenge with Alex is he’s very accurate, over his career, on field goals 48 yards or less. A year ago, there were only two guys that were better than him in the National Football League. So when you’re looking into improving the position, it’s an interesting dynamic. You’ve got a guy who’s a really accurate field goal kicker, but his kickoffs are not up to par.”

The team’s answer to that was to bring in some competition in the form of undrafted rookie Carey “Murderleg” Spear. Back in May, I wrote that Spear was just here to push Henery, not replace him, and based on the inaccuracy shown by Spear in June, he may not only fail to replace Henery, but he may fail to give him much of a push either.

The bottom line on Henery is that he just doesn’t have a very strong leg, which is a killer here in the Mid-Atlantic region, where in cold weather barometric pressure isn’t combatted by eddies of rising air, so the ball doesn’t carry as long. (Think tire pressure winter vs summer.) A weak legged K in December is a liability, not just on long field goals, but on kick-offs, and kicks vs the wind from anywhere but dead center.

I said earlier this month that my hope was that Spear would beat out Henery in camp, but from everything I’ve been able to compile since then, unless the Birds go out and sign a guy like Rob Bironas, or unless Spear has found himself a Mr. Miyagi between OTA’s and Training Camp, this is Henery’s job.

Keep up with Training Camp Battles and other Eagles developments! 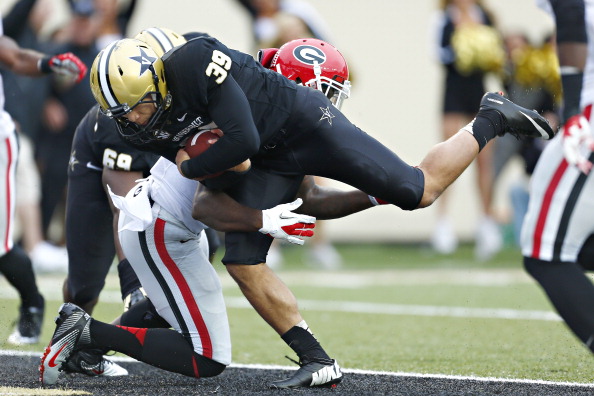 MOST fans want Alex Henery replaced. Add a guy like Carey “Murderleg” Spear, and that desire to wave goodbye to Henery reaches near critical levels. I mean seriously, Carey Spear even sounds like a warrior’s name, doesn’t it?

The thing is, the more I look at the situation, the more it doesn’t seem like a slam dunk that Spear has a legit shot at Henery’s job. Follow me on this.

As a pro, Henery has an 86% accuracy rate over the last 3 years. In fact, to look at him on paper you’d wonder why fans want him gone so bad. What that stat doesn’t tell you, is that Henery’s accuracy is regressive, as it’s been worse every year. His ho-hum kickoffs are enough to be annoyed with, but the main thing fans have against Henery, is his accuracy in the clutch.

He only seems to miss the kicks that could ice games, or stem momentum. Last year’s game against the Chargers and the playoff loss to the Saints spring to my mind. So does the game in his rookie year against the 49ers, the one where RB Ronnie Brown invented a new way to fumble. (I watched that game over my best friend’s house. He’s a huge 9ers fan. Wouldn’t shut up. Thanks Ronnie.)

So, Carey Spear to the rescue right? Not so fast. Even in college Spear was only a career 78% kicker. His jump from 23 Touchbacks in 2012, to 47 in 2013 was due in part to the new NCAA rule that moved kickoffs up 5 yards. In fact, if you take away Spear’s willingness to hit, you don’t have a compelling reason for him to be here at all.

When Spear mentioned to Dave Spadaro that “Al” had taken him under his wing, it made me wonder if Spear was brought in here mainly to give Henery someone to mentor. There’s nothing revolutionary about it, as many coaches have done something similar. What it does however is focus the mentor. (And hey, if Spears kills it and wins the job, I won’t cry over it.)

The thing about mentoring (I’m actually certified in it (2006)), is it forces you to do little things, and sweat even the small details; because you have to figure out how to “teach what you preach”. You have to model a behavior to teach it. You have to model a technique to teach it. As you teach the pupil by repetition and/or example, you’re also reinforcing/re-learning it yourself. As a result, this year Henery could be the best he’s ever been.

I wouldn’t be so fast to run out and get ‘Murderleg’ on a jersey yet. Henery might still be alive and kicking.