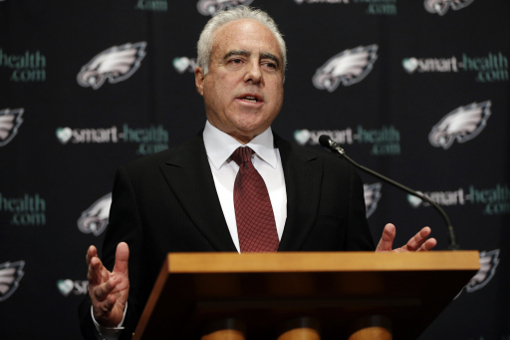 EAGLES fans it’s time for a reality check. You either get to keep DT Fletcher Cox long-term, or QB Sam Bradford. If a long-term deal gets done for one this year, a one CANNOT be reached for the other. Let me say this plainly. We can only sign one. I say again, we can only sign ONE. The money simply isn’t there for both. The NFL will not expand the salary cap for JUST the Eagles.

Too many Eagles fans are stumbling around out there with images of Bradford as our starting QB in 2016. My guess is that those same fans either don’t own a calculator, or really don’t understand what the salary cap is. In fact, I get the feeling that some of them may think the salary cap is a type of hat.

Look, listen. Eagles GM Howie Roseman has said  that signing Cox is a priority and that he will get “great” player money. Cox is looking for a 100M+ dollar deal (with about 50M of it guaranteed). Being conservative and saying that he “only” gets an even 100M, that breaks down to 16M per year over 6 years, or 14M per year over 7 years. Given that he’s scheduled to make 7.8M this year, that’s at least a jump of 6M this year alone (depending on structure).

With cutting ILB DeMeco Ryans yesterday, the Eagles just added 3.5M to our 26.4M in cap space. That gives us a total of 29.9M in cap space. If Cox pulls down 14M this year, that would only leave about 15.9M in cap space. Bradford won’t stay here for 15.9M. Roseman has said “It’s a huge priority for us to keep Fletcher Cox”. Given that he’s uttered no such series of sounds about Bradford, I’d have to say that the Eagles have already made their choice here.

Let me sum up for those who still hold out hope that I’m wrong about Bradford: We can only sign one. Cox is the priority. Bradford won’t stay for what we can offer him. So go ahead and start burning your Bradford jerseys like you know you will, when you go from worshiping him to suddenly (and unfairly) labeling him a traitor or “just being in it for a paycheck”.