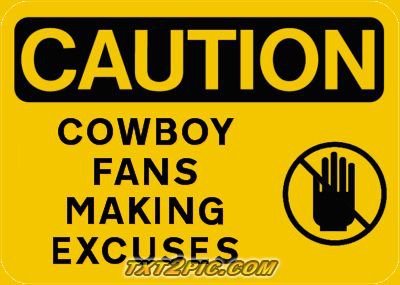 FOR weeks when we were the top seed all you heard from Cowpie fans was that we only had it by a “technicality”, that it was “still early”, and that who was top seed “didn’t matter until the season was over”.

Yesterday they struggled to beat a vagiants team that we shut out, humiliated, and sent packing just one week earlier. And when we beat them they at least still had WR Victor Cruz for a good portion of the game. Still we game them NADA. Zero. Zilch. The Cowpies on the other hand gave up 21 points to a team that didn’t have Cruz at any point. In fact 2 of the TD’s they gave up we to a rookie WR making his first start.

If you bring up the fact that we sent them home last year when we won the NFC East, they’ll tell you quick that a division win is unimportant and what matters is a Super Bowl win. What’s funny is how that isn’t the song they’re singing today. Suddenly it’s important to be the division champ. Suddenly it’s valid.

Yesterday, in their own charmingly hapless way, the vagiants exposed some serious flaws in the Cowboys team that I look forward to seeing exploited as I enjoy my turkey next month. And the best part is that through the act of shooting of their mouths last night and today, the Cowpies fans MADE IT KNOWN that at the very least, as of 10/19/14 they consider the division lead important. That means that now by default that makes WINNING the division important. EVEN TO THEM.