EAGLES QB Carson Wentz frequently plays and produces at an elite level. He has his flaws: He has a history of taking too many sacks, instead of getting rid of the ball quickly. He doesn’t run for enough cheap yardage. He leans too much on the TE position. In fairness, he seemed get past much of this by the end of 2019. It’ll be interesting to see how he opens 2020.

Even with his flaws, Carson’s young resume still boasts a constellation of stellar marks:

* He rarely throws interceptions, having never thrown more than 7 in a season, since his rookie season when he threw 14.

* His red zone stats look like something out of a Madden video game. In 55 games he’s thrown 72 touchdown vs just 2 interceptions in the red zone.

* He’s won the division twice out the four years that he’s been a pro. His first division win was iced even before he played the game in which he was lost for the season. By that point, he was an MVP candidate, and he had his team playing for home-field advantage in a year when his efforts would help win Philadelphia’s first Super Bowl.

* He won his second division crown throwing to a group of players (WR Greg Ward, WR Deontay Burnett, WR Robert Davis, RB Boston Scott, and TE Joshua Perkins) all of whom started the season as Practice Squaders. Burnett and Davis weren’t even on Philadelphia’s PS.

The fact is, Carson is a monster. Anytime someone wants to take a shot at him, they never attack his play. They attack the three regular season and three playoff games he missed in 2017. They attack the two first games of 2018 where Carson wanted to play, but the coaching staff held him out until the team doctor (since fired) cleared him. They attack the last 5 games of 2018 where again, Carson wanted to play (through stress fractures in his back), but was shut down by the coaching staff, on the advice of the (since fired) medical staff.

The question however was, is Carson Wentz elite? Is he to be mentioned in the Brady, Rodgers, Wilson, Brees, Mahomes crowd? Is he in that upper echelon of current NFL QB’s? The short answer is: No. He isn’t. 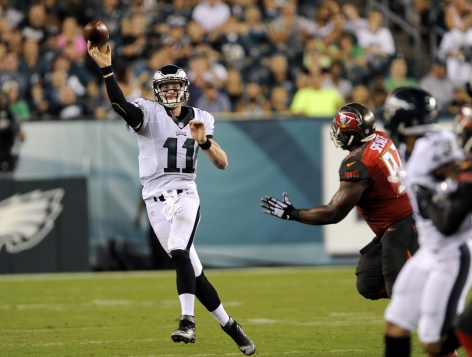 Currently, Carson is 0 – 1 in the playoffs. We Eagles fans can spin that 2019 playoff loss to Seattle any way we like, but the facts are, Carson started the game and the Eagles lost it. Period. Until Carson gets that first playoff win under his belt, he’s going to be the Buddy Ryan of QB’s: Great in the regular season, but the world’s greatest tease in the playoffs.

Carson’s arm strength, accuracy, ability to read defense, and ability to make plays that make other players gasp, are all top-notch. There is no doubt that he is an elite talent, but there is a difference between being a “talent”, and being a guy who delivers. To become an elite QB, to become a guy who delivers, Carson has to get this team to an NFC Championship game.

THE Eagles aren’t getting as much out of CB Rasul Douglas as we should be. Part of the reason is that Defensive Coordinator Jim Schwartz has repeatedly tried to use Douglas as an every down, man-to-man Corner. That’s not who Douglas is, though. And if the team is going to get his best football, they have to put him in better positions.

Some sportswriters in Philly don’t think Douglas can play FS. However, when FS Rod McLeod needs a breather, I’d like to see Douglas get time back there. Actually, that’s where I’d want to see him for about 80% of the field. Once we hit the red zone, then I’d like to see him slide over to CB.

When Douglas first got to Philly, sometimes he was used as a CB, and other times as a FS. Even early on, he showed good instincts and an understanding of what opposing offenses were trying to do. At 6’2” 209 he more than has the size to be dominant at either position, but he’ll always lack an important CB trait.

When he first got here in 2017, his tackling was

That made him risky to play at FS. However, in 2018 DT Fletcher Cox called him out over it. Douglas took it to heart, and worked to vastly improve his technique. Today (for a CB) he is an excellent tackler. He also aggressively sniffs out Screens, and routinely blows them up in the backfield.

The issue with him at CB, is that he doesn’t have the wheels to cover top-end speed. Which is a shame because he has excellent ball skills. He can be a problem when he can turn a catch into a contested one. In fact, if he isn’t in “chase” position, throwing the ball in his area comes with a ton of risk. No mater who you think you are.

While an absolute burner may get a step on him on long routes, no one is going to run away from him inside the red zone. That becomes an area where he can be used on the edge. Long arms, height, and ball-skills give him the tools to generally make opponents pay, without exposing him to poor odds. You’d need an excellent throw to beat him.

Douglas starting at CB in Cover-2, Tampa-2, or Cover-4? You might squeeze a Pro Bowl or two out of him. Given deep help, he’d make life hell underneath. However, in a Cover-1, or Cover-3 system, he’s just not a down-in/down-out guy. I really like him. I’ve rooted for him from the jump, but he just isn’t a starting CB in our current system.

However, in even in our Cover -1/Cover-3, he’d make a receiver’s life difficult, as a red zone CB.