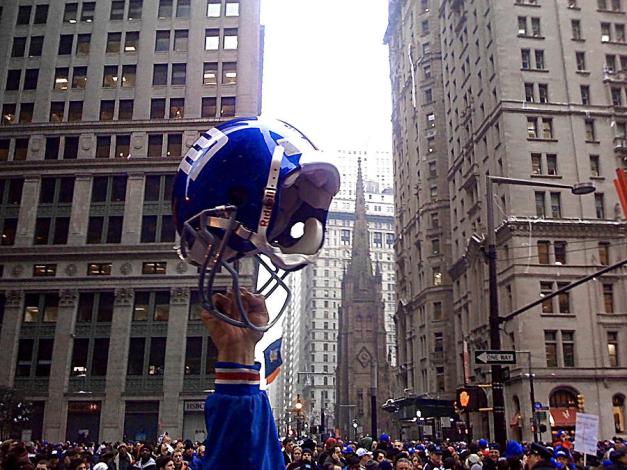 LAST year the New York (g)iants finished 4 – 12 overall, and 2 – 4 in the division. Their 2019 offensive and defensive rankings are irrelevant, because under rookie head coach Joe Judge, there will be plenty of change. An early wise move by Judge, was hiring former Cowboys head coach Jason Garrett to be his offensive coordinator. Aside from his offensive expertise, Garrett also brings current knowledge of the division, as well as intimate knowledge of his former roster. This could give New York a chance to hit the ground running.

Let’s get a look at what the 2020 Pre-Draft giants roster, tells us about who New York is today.

Daniel Jones was anything but consistent in his rookie year, but given that it was also the swan song for Eli Manning, it seems like a pass has to be given here for that inconsistency. As far as his 23 turnovers, that can’t be looked off. His 18 fumbles also can’t be ignored. Those numbers are even more alarming when you realize that he missed 3 games.

On the plus side, he posted 279 rushing yards last year. Manning never did that. He never had a season of even half that. Jones’s mobility allows the coaching staff a chance to get creative and revamp what the NFL has come to know, as giants football.

Behind Jones is the serviceable Colt McCoy. McCoy plays with the confidence of a starter, and this is the most loaded team he’s ever been on. The giants could do worse for a back-up. Still, at this stage Jones has yet to demonstrate that the game isn’t too big for him. His lapses are pivotal, too frequent, and frequently in pivotal moments. (-)

Saquon Barkley ran for 1,003 rushing yards, but the way he produced them, had many people raising an eyebrow. Many games featured him being held under wraps, until a big play would boost his numbers, and make it seem like he’d been good all game long.

In reality, Barkley’s performances were inconsistent and unreliable during games. He has the talent, but he has to find a way to matter on more downs. Wayne Gallman had one big game against Washington during a three game stretch without Barkley. During the same stretch, rookie John Hilliman got 30 handoffs, lost two fumbles, never scored, and rushed for just 91 yards. Former Titan Dion Lewis was added, for some reason.

If anything happens to Barkley, this team will remove their helmets, go to the sideline, and sit quietly until the season ends. Still, they do have one of the most dynamic players in the league. If the new staff can get consistency out of that talent, this offense might make some noise. (+)

Last year, I soundly mocked the combination of Sterling Sheppard and Golden Tate as this team’s starters last year, and was right on the money. With the departure of Odell Beckham last year, Sheppard said that he looked forward to leading. He immediately developed into a poor man’s Cole Beasley, with Tate playing Nightwing to his Robin.

Enter fifth round pick Darius Slayton. He gave the offense a little more size, and lot more speed on the perimeter. He also made plays that Sheppard and Tate don’t have the kind of athleticism to make. Corey Coleman returns from injury on a one year deal, but he hasn’t played any significant ball since 2017. The position has some talent and veteran stability. While that may not scare anyone, it allows for development. (+)

With a third year under his belt now, it’s possible to discuss trends and patterns regarding Evan Engram. In his rookie year he posted 722 receiving yards. In his second year he posted 577. In his third year, 497. Games played? 15, 11, and 8 respectively. At this rate he’ll play 6 games and catch for 386 yards in 2020. He needs to pick his game up.

During the 2019 season, the team picked up Kaden Smith, formerly of the 49ers. Smith started once Evans went down for the year, but he displayed no traits that make you think that New York doesn’t need help here. Also formerly of the 49ers, is Levine Toilolo. His 6’8” frame would suggest red zone menace, but his 97 catches and 8 TD’s in 7 years, tell the tale of a blocker. (-)

So LT Nate Solder is back, but he was a massive disappointment in 2019. Former Cowboy Cam Fleming will likely get the nod at RT. Behind these two are a pair of benchwarmers, who are as green as clover. (-)

Supposedly Hernandez is missing alignment reads, but why does that fall to a LG? Is every man on the o-line responsible for his own read? Who calls the protections? Who calls the slides? I can’t think of the last LG to do that. If there’s a communication issue, it doesn’t rest with the LG.

At RG is Kevin Zeitler, who wasn’t the rampaging failure that I predicted him to be last year. That’s not to say that he played like a Pro Bowler, but at least New York can say they plugged a leak. Nick Gates could step in at RG, if the rumor of Zeitler sliding outside, happens to come true. (+)

Any time an o-line has communication issues up front, look no further than the guy in the middle. In this case that would be John Halapio.

From all appearances the game is faster than Halapio can process mentally. That results in an out of sync o-line. Spencer Pulley is the reserve, but he’s also the guy they demoted, for the problem child they stuck with last year. (-)

This unit has critical issues with both communication, and ball security. The QB is no longer a rookie so his reads should be better. How much better remains to be seen. Whether o-line communication can get better without swapping out the C, is a major question. This offense can make some noise, but they have to stop waiting for it to fall into their laps, and take control of the situation. As the expression goes: Hope is not a strategy. (-)

(NOTE: The giants are listing nearly all of their linemen as “defensive linemen”. It’s a cheap ploy to create uncertainty among the shakier coaching staffs. Everyone knows that the giants are moving away from a pure 3-4 to more of hybrid 4-3/5-2 front. It’s just Three Card Monte. Now that we’ve sorted that, let’s look at who (as of today) would start at this position.)

Leonard Williams joined the team via trade, at midseason 2019. Honestly, there isn’t enough tape on him in a Giants jersey, to forecast whether or not he’ll be better than he was as a Jet. Reserve B.J. Hill was essentially demoted for Williams, and is a decent player. Oshane Ximines is a second year man likely in for a larger role. (+)

2019 rookie, Dexter Lawrence came in and made an immediate splash, with 22 tackles and 2.5 sacks in his first eight games, while posting 4 tackles or more three times. Those may not seem like big numbers, but for a 342 pound rookie, essentially playing interior lineman, they were a damned fine start to a career. Then he hit a wall, and posted just 16 tackles for the remainder of the year, and no more 4 stop games. So this one has promise.

Having a huge body beside him to eat some double teams, allowed Dalvin Tomlinson to get more “iso” work inside. The result was his best year as a pro, posting 49 stops and 3.5 sacks. There is no reason not to expect more of the same in 2020. Austin Johnson was brought over from Tennessee. He’s not great, but teamed with R.J. Macintosh, the giants have size and experienced depth, which is never bad to have in reserve. (+)

David Mayo is nothing special. He’s not big, or fast, or a good pass rusher, or a competent cover man. His biggest talent so far seems to be continuing to draw an NFL paycheck. Rookie Ryan Connelly got off to a start, before a blown ACL in week 4 shelved him for 2019. Teams will test the sharpness of his ability to change direction in 2020, so don’t expect him to pick up where he left off. Both Mayo and Connelly played inside in 2019’s 3-4 scheme, but right now it seems like the Giants will try a 4-3 hybrid look in 2020. Lorenzo Carter is suited to this position in a 3-4, but he’ll likely have to move to end, if the team does in fact switch systems. Kyler Fackrell was brought in off of Green Bay’s bench, on the strength of what seems like a fluke 2018 season. Aside from (possibly) Connelly everyone else here is just a pass rusher. (-)

Blake Martinez was plucked from Green Bay and has all the tools to be a star. Was that direct enough? (+)

Jabrill Peppers. He’s the only player at this position on the roster to start an NFL game. The next most experienced player is 31 year old, nine year veteran Nate Ebner. Nine years. Zero starts. This has to be where that first draft pick lands. (-)

The big man on the block is free agent signee, James Bradberry. Bradberry is a big body who looks good on paper, but never looks quite as good in a game. Deandre Baker didn’t have an awesome rookie year, but he was a first round pick, so he started 15 games and will start in 2020. Julian Love started the final 5 games, and wasn’t much worse than anyone else at this position. In his defense, he was just a rookie taken in the fourth round. Sam Beal has yet to justify the Supplemental third round pick the team spent on him in 2018. Grant Haley, Corey Ballentine… New York has made a concerted effort to get young at this position. Young is good. Experienced is better. (-)

The Giants are what happens when a team leans too heavy on the idea that “pass rush wins games”. Pass rush helps, but if the rest of the defense can’t cover, then there is no pass rush. They are going to need a Connelly to be surprisingly good and add more talent in their secondary to have any shot at being a decent unit in 2020. (-)

While attempting the fewest punts of his career Riley Dixon had his best year so far in terms of Average (46.1), Net Average (42.3), lowest number of his punts returned (24), lowest number of return yards (136), and yards per return (5.6). He did however, have two blocked. Still, this guy’s foot will set a defense up well, and thus he gives his team a shot to win. (+) 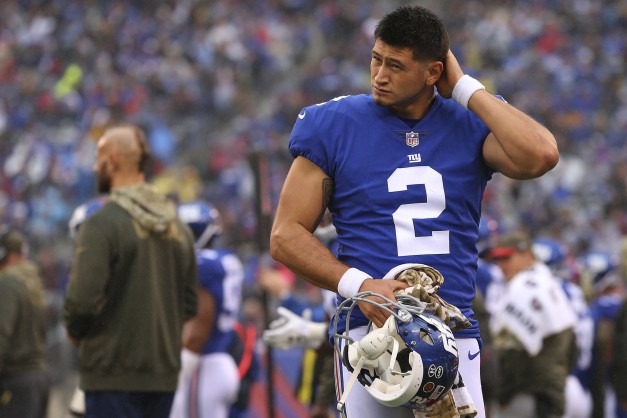 This team needs to replace Aldrick Rosas. Honestly, I have no idea how he’s still on the roster this long after the season.

The good news is that they seem to have a number of viable PR options. The bad news, is that none of them has ever taken a punt back for that tasty treat. So the position has babysitters, but no daddy. (-)

Aside from the punting, this unit needs serious help. Given that games are frequently won and lost on a toe; given that good starting field position for opponents often follows misses; and given that poor kicking leads coaches to go for it, in 4th down situations that they would rather not, this unit as a whole can’t be given a thumbs up. (-)

The Giants are a rebuild. They started their rebuild in 2017 when they hired GM Dave Gettleman, and he hired head Coach Pat Shurmur.

No one expects miracles in the first year, so fans mostly wrote 2018 off. Then Gettleman re-started the rebuild with a fire sale of Shurmur’s weapons in 2018. So of course no one expected much in 2019.

However, after 2019, the rebuild was re-re-started by ripping out Shurmur, and replacing him with this rookie head coach. So of course this means no expectations for 2020 either. I can just picture Gettleman telling everyone to “Trust the Process.” This team will suck until they fire the GM. As for 2020, call it 6 wins, 8 if they get off to a fast start.