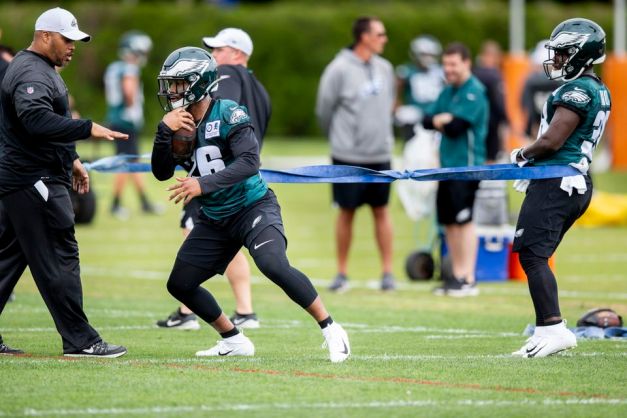 EAGLES fans have already fallen for rookie RB Miles Sanders. He has yet to log a single Training Camp carry, and already I’m seeing talk of how he’ll be the starting RB next season. Not during the 2019 season, but the 2020 season. There are some people who are already looking past offseason trade acquisition, RB Jordan Howard.

This is a mistake, and proof that some members of our fan base, keep failing to grasp a fundamental NFL truth. That truth being: You can never have too much talent in a position.

2002: The Eagles had CB’s Al Harris, Lito Sheppard, Sheldon Brown, Troy Vincent, and Bobby Taylor, all on one roster. By 2004 all but Sheppard and Brown would be gone.

2008: The Eagles added CB Asante Samuel to a roster that already included CB’s Sheppard and Brown. Immediately the chatter began about who to bench or not re-sign (Lito) because we had Samuel and Brown. Instead of learning from 2003’s mistake and embracing depth, we made depth a detriment. Again.

2018: A QB room that looked like Carson Wentz, Nick Foles and Nate Sudfeld. Foles was allowed to walk for nothing, ostensibly because the Eagles couldn’t afford him. Foles subsequently signed a 4 year contract with the Jaguars. Since then, Eagles GM Howie Roseman has found a way to gin up/create/conjure roughly 21M$ in cap space. That’s 21M counting the rookies. Oh yeah, Foles 2019 salary cap figure: 12M$. The Eagles didn’t let Foles walk over money. Don’t let anyone fool you about that. Not now.

In 2017 the Eagles had RB’s LeGarrette Blount, Jay Ajayi, Corey Clement, and Darren Sproles. Until Sproles got hurt. However, even with Sproles being hurt, we were still ridiculously stocked at the position. In fact, we leaned heavily on those RB’s in our Super Bowl win. After which, Blount was allowed to leave.

That left us Ajayi, Clement and Sproles in 2018. The idea was to make Ajayi “the guy”, and let him be spelled by Clement. Sproles was never supposed to figure in heavily. Then Ajayi got hurt, and Clement got nicked up, then injured. Suddenly a position that was embarrassingly deep in 2017, was a bare cupboard in 2018. Raise your hand if you missed Blount in 2018. 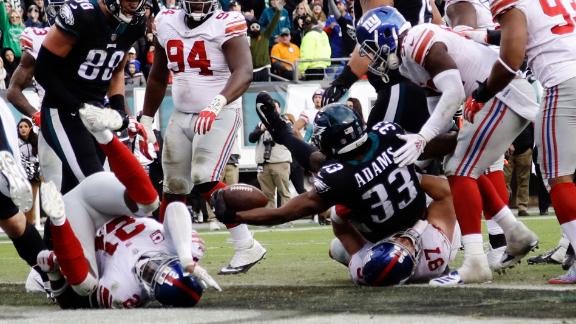 Right now RB looks like Jordan Howard, Miles Sanders, Corey Clement and Josh Adams. (Scuttlebutt has it that Wendell Smallwood is on the outside looking in.) However, as I said, many fans are already looking forward to the days (2020) when Howard has moved on, and the onus gets thrust upon Sanders. That’s a short-sighted thing to wish for.

First of all, depth is NEVER bad. NEVER. Second, playing these guys as a platoon, keeps them fresh during the season, and could prolong their overall careers. Third, if we find a guy who works for us, we should by any and every means at our disposal, lock him down. Even if it’s just so that our rivals can’t find their salvation in him. If this group works, it’s only smart to keep it intact.

It’s time to learn the lesson Eagles fans. It’s time to stop making the great, the enemy of the great. Sanders is great to have. I’m excited about him too. However, even greater than Sanders, is Sanders when surrounded by big-time help.