THERE IS NO PLAN. 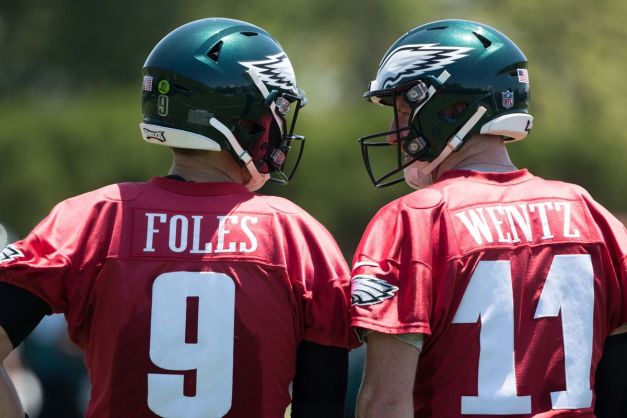 MY position a couple weeks ago, had QB Carson Wentz starting, and QB Nick Foles returning to the bench, if the Eagles made these 2018-2019 NFL playoffs. It was the only thing that made sense out of not putting Wentz on Injured Reserve after he was found to have fractures in his back. After all, you keep an athlete active to play him. If he isn’t going to play at all, you shut him down for the year, and put him on IR. That’s how this game works. It’s no-brainer kind of stuff.

Wentz playing in these playoffs seemed like a given, due to several (still pertinent) factors:

1) The Eagles need to evaluate how much money they’re going to pay Wentz on his extension.

All those things can be thrown out the window, if the Eagles have already decided that Wentz’s next contract isn’t their problem. In which case, you shut him down to avoid any distraction, and chart a clear course with Foles. Again, this is all no-brainer stuff.

Unless of course, the Front Office expectation was that Foles was going to flop against Chicago’s #1 ranked defense. Had that happened, it could be stated that there is no “Foles magic”, that there’s nothing to see, and we can move on.

If that’s what the FO wanted, it completely blew up in their faces with a clutch touchdown drive, followed by a miraculous, unheard of, tipped and double doinked field goal miss.

NOW the problem is, with every playoff win, the notion of Foles magic grows exponentially. The farther we go, the harder it will be to get this fan base to accept Wentz again as the starter, with out half of the base calling it a step backwards.

Should Foles win another Super Bowl this year, shipping him out, or (finding a way to afford him and) sitting him behind Wentz again, sets Wentz up as a sham QB. In fact, if we repeat, anything short of Wentz winning one next year, says that the Eagles are where we were before we drafted Wentz. Searching for a QB who can deliver.

The only way out of this, is for Wentz to play and win in these playoffs. That’s it. At that point Foles isn’t magic, and Wentz isn’t magic, the Eagles are magic. Nothing short of that gets the whole fan base all on one bus, and allows Foles to leave here and Wentz to stay here smoothly.

Short of a Wentz  won SB in 2019 or 2020, Head Coach Doug Pederson can look forward to the remainder of his tenure being marred by questions about whether Wentz is over-paid, and if his bosses goofed when they took away the only magic this franchise has ever laid claim to.

Not a good look.