UNDERDOGS. THIS is what it feels like to truly be an underdog. Not running away with a conference, but sinking deep into a division. It means not being favored. It means mathematically not having a real chance. It means the odds being against you. THAT is what underdog truly means. The Eagles are underdogs now. It’s time to see how fast our team can run.

Word from on high is, the Saints aren’t taking us lightly. They are preparing as if they are going to face a champion. In their quest to become champions themselves, they are paying attention to the details. We need to match that.

So let’s talk about the Four Things we need to focus on this week versus the Saints :

1) Run the ball: This apparently has to be stated every week, or we won’t do it and then we’ll lose. So like a weird good luck charm, I’m saying it. Run the ball against the best rushing defense in the NFL. Hand the ball off at least 25 times. Over 25 handoffs (called runs) and we’re 4 – 0. Under 25 and we’re 0 – 5. Can’t be clearer on this. Just don’t let RB Wendell Smallwood get the bulk of the work. He sucks ass.

If QB Drew Brees is worried about his safety, he might not see one of ours. (See what I did there?) One of the main reasons that the Saints have just one loss, is because they don’t turn the ball over. Brees isn’t going to give away turnovers, we have to force them. No QB in football has been sacked less (9) or hit less (28) than Brees. So hitting him would be unusual, and very likely to throw off his rhythm.

3) Dictate the passes: Old expression in fighting: Take one to give two. It means to decide on where to absorb punishment, in order to dish out more. Smart QB’s like to “take what the defense gives them”, so we need to decide where WR Michael Thomas can make catches. This sets him up for big hits and routes that our Safeties can sit on,

4) Go deep early: WR Alshon Jeffery is our X-factor in this game. 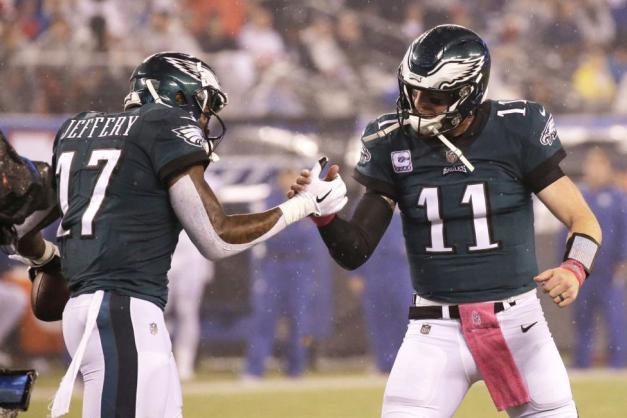 The Saints have no answer for him. While TE Zach Ertz is reliable and helps move chains, he’s also not explosive and can’t force teams to scrap their coverage plans. On less than half the catches, Jeffery has just one fewer touchdown (4) than Ertz (5). It’s time to put the fear of God back into everyone who has to face us from here on out.

I have to play the odds and predict a Saints win just for credibility sake, but mark my words: This is actually a winnable game for the Eagles. So don’t be surprised to find yourself yelling “Where was this last week!?!”