WE NEED A FRANCHISE QB

I’M too smart to buy Sam Bradford as a franchise quarterback. I said the same thing about Bradford’s predecessor if you remember. Years before this website was born, I said similar things about the would-be-successor to this franchise’s All-Time Best QB. Funny thing is, I was met with fierce opposition every time, by fans staunchly supporting players who had proven nothing in the NFL. In the end those players proved me right, and made their supporters look foolish.

And it’s about to happen again.

Many fans booed the drafting of Donovan McNabb. Despite the games won, playoff games won, and half of this franchise’s Super Bowl appearances, those “fans” spent years continuing to boo rather than admit they were wrong about doing so in the first place. In spite of these people, McNabb merely went onto become this franchise’s standard bearer for excellence at the QB position. Considering Eagles fans appreciation for QB’s, a case can be made that this fan base can’t tell a good QB, from garbage one. Just look at the guys this fan base has idolized since Randall Cunningham left town.

Remember Bobby Hoying? Finished out 1997 starting a handful of games, while tossing 11 TD’s and 6 picks. During the offseason, fan’s thought he was the bee’s knees. Then 1998 started and he struggled badly. Fans here quickly turned on him and utterly destroyed him. I think that more than anything else is what permanently broke him. He ended up in Oakland where his meltdown slowed but continued, and he was soon was out of football.

Remember Kevin Kolb? He was a total fuck-up, and yet fans badly wanted a reason to love him. Any reason would do. Most of the arguments people made on his behalf were speculations of what one day he “might do”, since there was no way to defend him based on what he produced on the field. Between the concussions, the interceptions, and being outplayed by back-up, (Wildcat) QB Michael Vick, Kolb’s bid to ever be “The Man” in Philly never really got any traction.

Nick Foles! Remember when Eagles fans loved him? Seems like it was only last year. Wait! It was last year. His supporters went at my throat like crazy wombats because I didn’t love him too. I never hated him, I just said that his one season was a total fluke. Now look at him. Nobody admits to having been a Foles fan anymore. It’s easier to find a former Nazi than it is to find a former Foles supporter. (I wonder what his former fans are going to do with their copy of his Pro Bowl jersey?)

Today we have Sam Bradford. His accomplishments so far include not having his season ended by an injury, and not being Nick Foles. Seriously, if you criticize Bradford, his supporter’s quick comeback is “Would you rather have Foles?” That’s like asking if you prefer the husband who slaps you, over the husband who punches you. Both are doing the opposite of what a husband is supposed to do. However, many of our fellow fans here have now set the bar so low, that they’d need a shovel just to see that.

Ladies and gentlemen, allow me to reset the bar to at least chest level. You need to see what we currently have, and compare it (apples to apples), with what we really need.

Here is Bradford and 6 other NFL QB’s. In order to keep it even, all these QB’s are within 15 passing attempts of Bradford.

Notice how his performance is noticeably behind all of their’s despite the fact that he attempts more passes per game?

Here is a breakdown of Sam Bradford’s season so far, game by game. Pay attention to the wins and how big of a difference he made in those games by scoring. 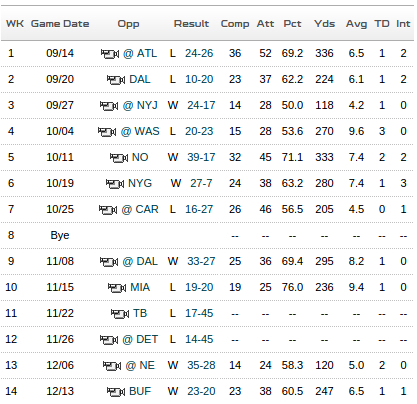 Now notice how big of a difference THESE QB’s make in their teams wins. In order to try and make Bradford look better, I didn’t include rushing stats. (You’ll have to click the chart to make it large enough to read.)

These QB’s play in varied systems, with varying levels of talent to throw to. Yet Bradford is clearly the runt of his peers. In fact, if you look at just QB performance, he’s barely outplayed his back-up this year.

Yet he’s worshiped by some.

Let me clue you in on something. Notice how we haven’t won a playoff game since we had a franchise QB? Until this team drafts another special QB, and stops trying to win the race while driving on a doughnut, you can expect this team to not be in a position to do anything but say “We were competitive” before drafting 16th – 20th again.

When the Eagles organization samples public opinion, and sees fans who are alright with worshiping mediocrity, they’ll have no reason to get our team the franchise QB it needs.

6 comments on “WE NEED A FRANCHISE QB”