PETERS AND COX, COME ON MAN! 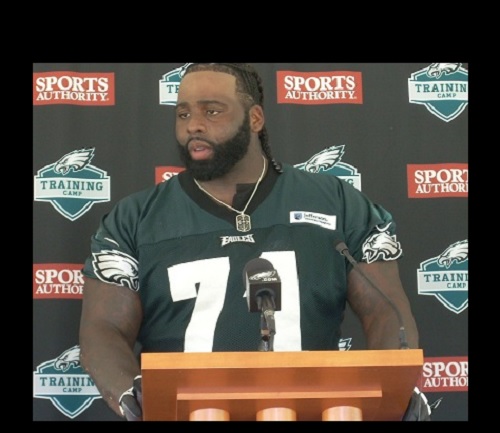 EARLIER this month I was glad that Cornerback Byron Maxwell said he sees the Eagles in the Super Bowl this year. The thing is, Maxwell has been to the last two Super Bowls, so why would he set his sights lower now? Personally I loved the confidence.

But I think a couple Eagles players need to dial down the chest thumping a bit. Specifically I mean Left Tackle Jason Peters, and Defensive End Fletcher Cox.

Peters made news by saying that the Dallas Cowboys Offensive Line “can’t touch” ours. If you’re the sort of fan who gives merit to non-NFL rankings (and I don’t), then you may know that the Cowboys O-line was ranked above ours last year. If you go by NFL stats and standings (and I do), then you may know that our line finished behind the Cowboys in Rushing, gave up more sacks (actually just 2 more), more hits on the QB (64 to 53), and got our starter injured for half the year. Oh, and if you go by wins, we also lost the division to them.

Cox recently said that he believes our front seven should be ranked as the number one unit in the NFL. The Eagles had 49 sacks last year, but then again so did the Ravens, while the Bills grabbed 54. More than that, both teams gave up fewer yards rushing per game than the Eagles (Ravens 88.2, Bills 106.4, Eagles 110.7). That right there is two teams that out-performed our front seven. A solid argument could be made for the Jets, Lions and Broncos having stronger front sevens as well.

I’m all for a guy showing confidence in his team and unit, but you need to have something to hang your hat on when you shoot your mouth off. Maxwell can say that he knows what it means to get to a Super Bowl; but neither Peters nor Cox has ever won as much as a single playoff game between them. Peters has had 3 cracks at it (2009, 2010, 2013) and lost in the Wild Card round, every time. Cox was here for the 2013 loss to the Saints. So the stats nor the wins support their statements.

Look, if you can walk it, you can talk it. You can burn it, if you earn it. However, if all you can claim on your resume are failures, then all that squawking is just bullshit. It’s false bravado. Peters and Cox should be popping off about staying hungry, not imagining fake laurels to rest upon. Leave the predictions, and high-toned mouthing off, to the proven winners. Everyone else needs to be about the business of earning it.

2 comments on “PETERS AND COX, COME ON MAN!”