INJURIES TO FOLES AND McCOY? 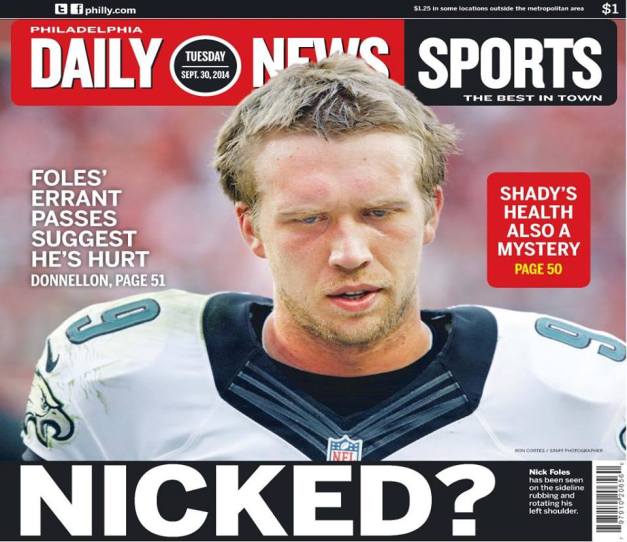 Image courtesy of the Daily News

WHAT if Cary Williams was right?

Last week after a third straight comeback win over the Redskins, EAGLES CB Cary Williams said the players were tired. Burnt out. Overworked. He said the slow starts were a result of having no legs after virtually playing a game the day before in practice.

Since Williams is already a mouthy guy, and is “only” a player, and wasn’t backed up by fellow players that felt the same way according to 2 sources; what he had to say was dismissed out of hand.

He even said his mea culpas.

QB Nick Foles and RB LeSean McCoy have been off their games since Week One. They’ve been off so much in fact that there is now a question of whether or not they’re hiding injuries. Basically that says that both of these men are needlessly holding the team back and humiliating themselves in the process, just to make sure their back-ups don’t get to play.

Often players will gut through an injury because they “Don’t want to let the team down.” Well in this case their play has already done that much. To say even after that, that Foles and McCoy would be unwilling to sit and let a healthy man help out, quietly insults their character by making them seem selfish, questions their commitment to the team’s success, and indicates that they lack a sense of professional pride in what they produce.

I also find it odd that in regards to running the ball, our Offensive line can’t open simple holes up the gut or off-Guard. They can’t generate a push on either side? I’m to believe they can’t win ONE battle up front, just because they’re back-ups?

Riley Cooper has never been what you’d call a sure-handed WR, but his drops this year have been nothing short of alarming. If he’d been this bad as a rookie he wouldn’t still be here today. It can’t be that Foles throws it too hard, because he doesn’t. Those drops show a clear lack of focus.

How about our lackluster pass rush?

You can go on for hours coming up with all the little reasons we’re performing how we are out there. Or, I can offer you 4 words that would explain ALL of it.

The ROOT of it.

We can keep on ignoring what is becoming painfully obvious, or we can maybe listen a little closer to Cary Williams.

Even if he is “only” a player.

22 comments on “INJURIES TO FOLES AND McCOY?”