CORNERBACKS Darius Slay and James Bradberry are seen as possibly the best starting Man-to-Man duo, in the NFL. If that’s the case, then they should be allowed to play more Man and less Zone. If that happens, then we should see them lining up closer to WR’s, instead of giving them cushions of five yards or more.

Eagles fans spent 2021 calling for the head of Defensive Coordinator Jonathan Gannon. Whether it was the huge cushions, the lack of blitzing, the unimaginative use of the LB’s, we weren’t happy with last year’s meager 29 sacks and 12 interceptions. Eagles brass (who had assembled that roster), hinted that maybe Gannon just needed better players.

So they went out and added a premier pass rusher in LB Hasaan Reddick. Added a premier CB in Bradberry. Even added some speed with LB Kyzir White. And that’s just among the proven NFL veterans! We also added two top-shelf defensive rookie talents. So “a lack of talent to work with” is no longer an excuse in Philadelphia.

Now that we have the cover men, we can shrink those cushions and make QB’s hold the ball a second or two longer. That will give our pass rush time to get their mitts on him. Or that QB can be an idiot, and throw the ball against tighter coverage. Sure, every so often that will result in a big play for the opposing offense, but it will also mean more chances at the ball for our Defense.

Giving swagger to a defense requires showing confidence in it first. If you want something to sprout, you have to water it first. Work, THEN results. There are no shortcuts. Being lazy today, only robs you in the future.

We went and got the guys. Now let’s let them play their game.

DEFENSIVE Coordinator Jim Schwartz is not going to abandon the principles that have built his career thus far. However, it’s clear that the old dog needs to learn a couple of new tricks. We need to become more disruptive of opposing passing games. We need to play some damned press coverage.

We don’t need to do it every down. That’s not who we are. But a 3rd and 7 should never come with a clean release off the line. Especially given how rarely this team blitzes. (We’ll also get into that soon, in another edition of The 12.) Adopting and adapting tactics that work, is just being smart. Observe:

Schwartz like to use off-coverage. He likes his Cornerbacks to play with a “cushion” of 5 or so yards off the line of scrimmage, so that they can read the intent of the receiver. (Is it an inside route, an outside route, a GO route, etc.?) That allows the CB to constrict their area of responsibility, release (if needed) the receiver to underneath LB coverage, and inform the Safety about where they have to be to help deep.

We aren’t giving up the big plays, but we also aren’t getting our Defense off the field. Plus, the longer the opponent has the ball, the more opportunities they have to do something dangerous with it.

Good but not good enough. If the mission is to win, then similar to the Patriots, we need to adjust to the situation, then adopt and adapt those tactics that will help us accomplish our goal. One of those things would be more of this: 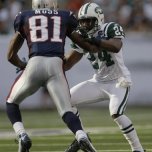 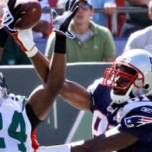 *NOTE: I use the “only x# teams had fewer” line, because of the screwy way the NFL ranks ties in a category. Note that both the Eagles and Bengals are ranked 9th , and how there is is no 10th ? As you can see, I made the adjustment and placed us 9th worst, not tied for 9th worst.

Both teams allowed a 66.6% completion rate, but going one decimal place over (Cincy .6660, Philly .6661), would allow for a definitive ranking. The NFL however, stops shy of that for some reason. This is just lazy stat keeping on the NFL’s part.

Keeping inaccurate stats helps fans make silly mistakes in debates, and look foolish for doing so. This can’t happen to you, because I do the homework to keep you looking good out there.