IF you hadn’t already heard, QB Nate Sudfeld has a non-season ending broken left wrist. QB Cody Kessler is your back-up. I’m looking for my whelm, but it’s under something right now.

Until last night I didn’t know that you could waste a meaningless game, but the Eagles sure as hell learned me “reeeal gewwwd”. I expected more urgency and purpose from our coaching staff. Silly me.

1) Starters need to play a quarter: NOPE! Didn’t even dress. (NOT DONE)

2) Go deep to DJax: Again, didn’t dress, and even the sideline interview was shallow. (NOT DONE)

4) Testing LB depth: LB Zach Brown was stout against the run and didn’t invite any passes thrown his way in coverage. That made me happy. I thought that LB L.J. Fort looked very good out there. Especially in coverage. LB Nate Gerry overran his run fit on one play, and gave up a long run up the middle. It was shades of the 90 yard run that he surrendered to Redskins RB Adrian Peterson last season. The middle is probably the wrong spot for Gerry. S Johnathan Cyprien looked good when acting as a LB, but missed his deep S assignment, and helped give up a touchdown that at first looked like it was on Fort. The Eagles need to clearly define Cyprien’s role. (DONE)

So that brings us a Four Things score of 1 out of 4. In a lot of ways this was a wasted week, because any questions you had about the starters are still unanswered. Questions about the back-ups? Still unanswered. Maybe we’ll get some of those answers next week when we go visit QB Nick Foles down at his new digs in Jacksonville. QB Carson Wentz (if he dresses) vs Nick Foles. Should be a hot one!

The thing about playing back-up exclusively in Preseason Game 4 is that there is no next game, and cutdowns are right on the back of that. There is real pressure to be had in that situation. Players reveal themselves in those moments.

Playing back-ups exclusively in the first game, takes the pressure is off, because they know they get a second audition in PsG 4. Did you see a sense of urgency out there last night? I know I sure didn’t.

I’m not trying to ruin anyone’s enthusiasm, but if the theme of this year is that everything matters, then this game should have looked as if the coaching staff took it seriously.

There were some positives however. LT Andre Dillard looked flat out amazing for a a rookie, in his NFL debut. He was poised and cagey, despite not being physically overwhelming. DE Shareef Miller could end up as the 5th end in the rotation. He did a good job of setting the edge, and pressing the action upfield. His hand-fighting still needs work, though.

CARSON Wentz has missed 8 of a possible 48 regular season games, and all 5 of the Eagles postseason games in the last two years. Still with the amount of talk about him being injured, you’d think he’d missed whole seasons, and didn’t contribute heavily to BOTH of the Eagles playoff runs.

The perception is that he’s always hurt, but let’s step back and look at the facts:

1) In 2017 he suffered a common football injury, when he tore up his knee whilst diving for a touchdown in a game where we were down 24 – 28. The touchdown was called back, but he got up on that torn up knee and threw a touchdown on the subsequent play. The victory would go a long way towards our playoff seeding, helping us secure our fourth championship via our first Super Bowl win

2) The first two games he missed in 2018 were the team holding him out, until they got medical clearance to allow him to play. This was done despite Carson’s insistence that he could practice and play.

3) The last three games he missed in 2018 were due to the team shutting him down when damage was found to his vertebrae. This was also despite Carson’s insistence that he could play.

4) Only three of Wentz’s missed regular season games were directly the result of his injury. Five of his misses were the Eagles organization being cautious with their Franchise QB, and shutting him down over his public objections. That’s not fragility. That’s a smart organization thinking of the big picture.

Yes, Wentz has missed 8 starts in two years, 13 counting playoffs. Those are facts, and indisputable as such. However, facts without context leads to poor perception, which leads to poor understanding. Garnering facts without understanding them, is in many ways worse than not having the facts at all, as it leads people to assume that they get what’s happening, when nothing could be further.

Now with a mega-deal in place. Wentz will be expected/allowed to play through things the team used to shut him down over. That’s not to say he’ll never miss time. He has a history of injuries and the body doesn’t age in reverse. What it means is, it will likely take a catastrophe to get him off the field, going forward. Expect to see him out there.

That said, this article is called STABILITY AT QUARTERBACK. That means the whole position not just at Starter. So let’s look a little deeper in the bag and see what we have in here.

Many fans are wishing QB Nick Foles was still an Eagle and they might get that wish granted. In a roundabout way. QB Nate Sudfeld has a similar build, a sneaky sort of athleticism, and also plays within himself, while trusting the system he plays in. Nothing about him screams Pro Bowler, but he’s been nothing but solid when asked to step in.

He hasn’t been as bold as Foles, but then again he hasn’t had the benefit of ever being a team’s starter. He’s going into his third season with the same system and core players. He’s on a 1-year deal, but with the plethora of young QB’s all over the league, even if he left after this season, he’s walking into another back-up job. With a brand new system to learn. So expect him to be here in 2020. 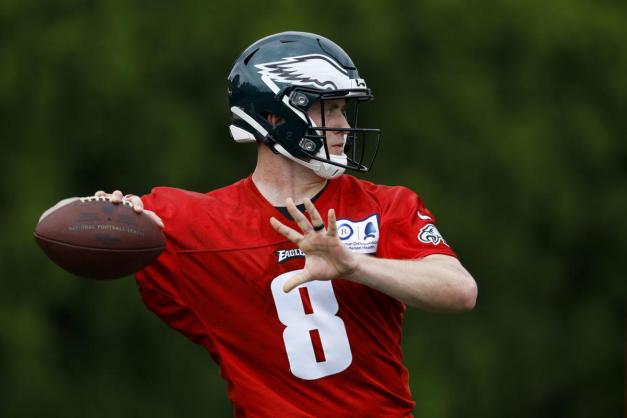 Rookie QB Clayton Thorson reminds me a lot of Carson, back when he came out of college. Word has it that Clayton didn’t look great in mini-camp, so he’ll have a steep hill to climb to challenge for that #2 spot in Training Camp. Which is almost certainly for the best. A year wearing a baseball cap, carrying a clipboard, and asking Nate questions is probably the best thing for him.

It’s hard to tell if QB Cody Kessler is just a camp body, or the Eagles hedging to have depth already on the roster, just in case of injury during Training Camp. Word is, he’s looked good in mini-camp, but what else would you expect from a 4 year vet, with starts on his resume?

So lets re-cap. Carson doesn’t miss with injuries that often, Nate is experienced within the system, with the players, and even with the weather we get late in the year. Cody is the second most experienced QB, and Clayton is all up-side. Of all of them, Carson and Cody are the oldest at 26. It would take very little to sign a couple of these guys to long-term deals. So yeah. The Eagles are stocked and stable at QB.