TOLD you we were going to win. That anger. That prep that I said the Eagles were doing… While our opponents were out partying and getting arrested, after practice, we had a curfew. It was a business trip. And we took care of business.

MLB Jordan Hicks (8 – 1.5 – 0 – 0) led the team in tackles, but it would have been great to see him play more shallow underneath coverage, to take away those Crossing routes, and limit QB scrambles. DE Chris Long (2 – 2.0 – 0 – 0) grabbed a pair of sacks to bring his season total to 3 so far. If he finishes the year with an even 6.0, I’ll laugh myself stupid. (I won’t say why. You’ll just have to google his career, and look for yourself.) Rookie CB Avonte Maddox (4 – 0 – 0 – 0) filling in at FS, went full-blown kamikaze on a Jaguar WR, forcing a fumble and our only turnover of the game.

I hear you asking, “What about all the stuff that stats don’t reveal?” Well, Billy that’s the reason for these “Four Things” articles. We introduce an idea of what needs addressing BEFORE the game, so that fans have to honestly answer questions about those things, AFTER the game. This helps to get us, and keep us, all on the same page.

1) Run the damned ball: This is about raw numbers. We ran the ball 28 times, but 6 of those were Wentz, so of course not all of those were planned. Aside from Wentz, there were 22 called runs in the game. Wentz attempted 30 passes and was sacked 4 times, so that’s 34 called pass plays. That ratio is 34:22 pass vs run. In those 56 plays, we only ran it 39.2% of the time. Again, that’s if you take out those 6 Wentz rushes. They may not count as pure, called plays, but opponents regard these sorts of plays as if they are. (Remember when the Jags QB was running? It was real wasn’t it? Same thing here.) Adding in those 6 rushes, you get a ratio of 34:28, on 62 plays. That has us running it on 45.1% of our plays. A 60/40 split, which is what I’ve been preaching for weeks now. DONE

2) Activate the Machine: We didn’t force a single turnover from QB Blake Bortles and Jaymes (24/41 – 58.5% – 286 – 1 – 0). That’s an alarming statement, and as an Eagles fan, it’s the first thing that has truly scared me all season long. I’ve been concerned about other things, but not being able to get the ball from Bortles indicates that upcoming games are going to brutal. NOT DONE

4) Send FIVE sometimes: This didn’t happen often, but we got two of our four sacks on blitzes. I can’t say this any plainer. It speaks for itself. Do this more, Jim! DONE

This week our Eagles planted our flag in 3 out of 4 goals, bringing the season tally to 14 of 32. It’s not a great percentage, but it is us lifting ourselves up, out of the muck. It’ll be a slow climb, but at least our Week 8 Bye will be the sweeter for the victory we get to savor. After that, for Week 9 we get our first match-up with the Dallas Cowboys.

A struggling Eagles team were without either of our starting Offensive Tackles a one point in this game. Head Coach Doug Pederson shifted and shuffled personnel along the O-line, to find some stability and productivity. RT Lane Johnson was lost for a month with an MCL sprain, but LT Jason Peters return to action gave us the needed boost to finish and close-out this victory. 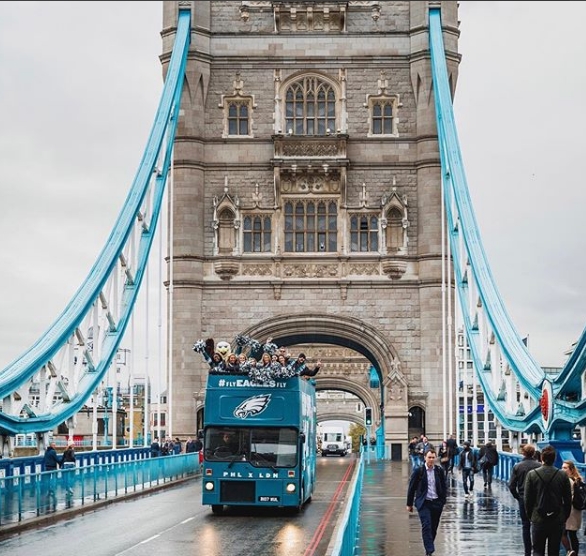 That being said, a solution needs to be found for depth at OT. While everyone seems to be hoping that the Eagles land Pittsburgh RB LeVeon Bell, trading for an OT might make more sense in the immediate and long-term. (Besides, if we’re going to trade for a RB, it should be LeGarrette Blount. Cheaper to trade for, cheaper to pay, and he knows the system already.)

Something has to be done about our Defense not being able to get off the field, at the end of games. Watching team after team convert 3rd and longs, and 4th and more than one, is getting embarrassing. Especially combined with how few turnovers we generate anymore. We gotta get to work fixing this Defense.