WE’RE going to win this week. Not just because the Jaguars are in a tailspin. The first reason we’re going to win, is because our PLAYERS embarrassed themselves last week, and they’re actually angry about it. Been awhile around these parts, since that emotion was part of a week’s prep. The second reason, is the silence. The silence is to be feared.

This week our 3 – 4 Eagles face off against a 3 – 4 Jaguars team. Head Coach Doug Pederson is the most important person in this match-up. It’s only Week 8 and his Eagles team has once again taken key injuries at a host of positions (RDT, RDE, FS, FS2, RB, RB2, NCB), and are banged up at both OT spots. That being said, there is enough talent to still beat this opponent. Coach just has to focus it through the right lens.

Given our defensive problems, the focus needs to be on out-gunning the Jags. If it turns into a boring field goal-fest, as long as we win, I don’t care. However the trick to beating Jacksonville is turning the game into a shootout, knowing damned well that they don’t have the firepower to keep up with us.

While WR Alshon Jeffery and TE Zach Ertz have been money in 2018, it would be great to see QB Carson Wentz launch a couple to WR Shelton Gibson, who was drafted to be a big play threat. It seems like a lid was slammed shut over the Offense when WR Mike Wallace went on IR, and we need to do something about blowing that lid off, so we can scare teams again.

So let’s talk about the Four Things we need to focus on this week versus the Jaguars :

1) Run the damned ball: This shouldn’t have to be said so much. BUT!! It seems that Philly is cursed to have head coaches (Andy Reid, Chip Kelly, now Doug) who don’t believe running is necessary. In any case, let me recite the mantra again for those who are new to this site: Running brings a Safety into the box, opening up the deep ball. Running slows pass rushers by making them read. The QB doesn’t get hit on run plays. Running eats clock and gives the Defense time to rest. Running beats up defensive linemen, and makes them less explosive pass rushers later in the game. Run the BALL! Oh yeah. As a side note (pure sarcasm right there), Jacksonville is 25th in the NFL against the run. They are the SEVENTH WORST RUN DEFENSE! Again, just a side note.

3) Pick your poison: (Building on the RUN THE DAMNED BALL theme.) The Jaguars have tons of speed on the edges, but they lack the size needed to hold up to being shoved around by NFL O-linemen. We need to attack their edges with off-Tackle runs, so that they over-commit, and open up Zack Ertz in the intermediate passing game, as well as play-action backside Screens. 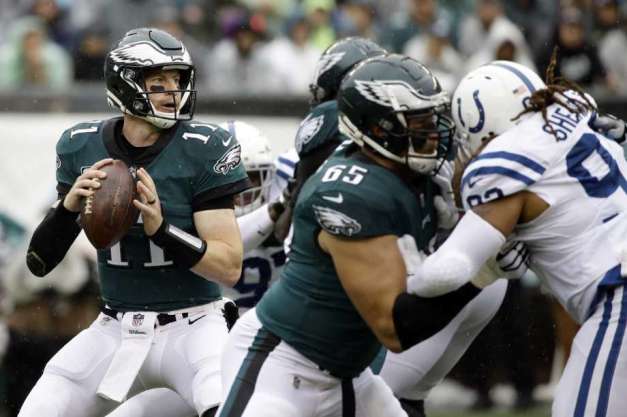 4) Send FIVE sometimes: Everyone knows that Defensive Coordinator Jim Schwartz doesn’t like to blitz. He feels that our four man rush gets enough heat on the QB. While we may be getting heat on QB’s, we aren’t cooking them at the rate we need to. Schwartz needs to stop being so damned predictable. We need him to stop showing off the same inability to learn and make adjustments, which got him fired in Detroit. Yes, we won a Super Bowl with him as DC, but we allowed 33 points in that game, and his unit had one sack all day long.

Understand, the worst thing that a team or an athlete can be, is comfortable. Books. Interviews. We went from “No one likes us” to “Everybody loves us”. Hungry dogs run faster, remember? But us. The players, coaches… We got civilized.

But then! Last week! We embarrassed ourselves. And we realized that it was US that did it to ourselves! Now the Eagles now seem uncomfortable. Making matters worse for Jacksonville is, by virtue of playing in London for each of the last 6 years, they’ve become the adopted home team. The Eagles are heading into amateur hostile territory, with a chip on their shoulders now.

While the Jaguars will be desperate for a win to get back in contention for their division, they lack the tools to fend off a focused Eagles team. The Bottom Line is that we have have Carson Wentz, while all they have is Blake Bortles. God forbid something happens to Wentz, we have QB Nick Foles, and they still have Blake Bortles. Let’s pray that we don’t knock Bortles out of the game.