Last week our Eagles struggled against the Falcons, but this weeks opponent won a shootout with the Saints. It would seem that we have have our work cut out for us, when we visit their house this Sunday, right?

Relax. This game isn’t going to be nearly as tough as it looks on paper. In football (just like boxing), styles make fights. The Saints team that the Bucs beat last week is basically a finesse team. It’s not a team that’s really built for a fist-fight. Actually the entire NFC South shares that affliction. I mean, do you see what we keep doing to that division? It’s because we’re built to beat even tough opponents, and they are nowhere close to tough.

I won’t keep you in suspense with this one. We’re gonna haul off and punch Tampax Bay square in the mouth. If the game is still in contention in the fourth quarter, it’ll shock me to my core.

So let’s talk about the Four Things we need to focus on this week versus Tampa Bay :

1) Chasing Private Ryan: Last week vs New Orleans, QB Ryan Fitzpatrick completed 21/28 passes (75%), for 4 TD’s, no picks, and an average of 14.9 per attempt. Not per completion, per attempt. With no sacks. That’s how little heat the Saints got on the QB. The worst part of that, is that the Bucs O-line isn’t that good. Fitzie won’t see such an easy week against the Eagles defensive front. In fact, Tampa may have to put out their other back-up named Ryan. QB Ryan Griffin is in his 6th year and has never thrown a regular season pass. Don’t be surprised if you see him:

2) Run the rock: You may have already heard that the Bucs have allowed the second fewest rushing yards in the NFL so far. It’s a mirage. Last week the Saints ran the ball a TOTAL of 13 times, despite leading for most of the first half, and never really being out of the game. Saints play selection was 45 passes to 13 runs. In fact, the Saints leading rusher had more catches (9) than carries (8). Being a finesse team, they didn’t even try to take advantage of Tampa’s smallish linebacking group. This week we need to not get cute and just feed the Bucs an early diet of trap runs, sweeps, and tosses. Then we should follow it up with a later diet of runs up the gut, once they’re tired.

3) Play Cover Two: We have to find a way to keep a lid on Tampa’s WR’s. DeSean Jackson had one the better games of his career last week. He torched the Saints secondary for 146 and two scores on just five catches, and Mike Williams had 147 and a score of his own. The Bucs like to play 2WR’s, and 2TE’s, so the need for a Nickel CB shouldn’t be as pronounced as usual. That means we should be able to play our base scheme, and can keep SS Malcolm Jenkins 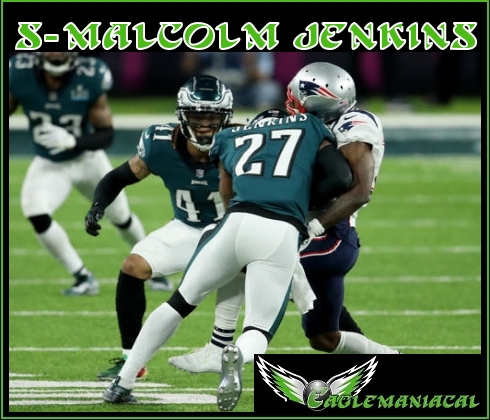 out of the box and back in coverage. As far as the boundaries, CB Ronald Darby is probably our only DB who can stay with Djax, so we have to be careful not to let him get matched up with someone like CB Jalen Mills.

4) Heavy play-action: One of the benefits of running the ball a lot, is that it helps to set-up the fake. Whether it’s buying time for receivers to get deep, setting up a backside Screen, or just getting this guy,

out on a bootleg, or designed run. (Or another pass.) Heavy play-action this week, could be deadly against a team that emphasizes speed to the ball. Getting them repeatedly out of position, or even better, making them hesitate later in the game, only makes it easier to put this game in our win column.

Old school wisdom: When you go on the road, pack your Defense and your run game. Given how ineffective our 31st ranked passing attack was, and that we’re still without two key pieces, we’ll likely get off the bus running the ball. Since their LB’s can’t contain both RB Jay Ajayi (in the box) and TE Zach Ertz (on the seam), at the same time, you can expect one to have a big day.

Our Defensive Line should be too much for the Bucs offensive line, so expect us to give Ryan, fitz. (See what I did there?) Getting back OLB Nigel Bradham this week, should go along way towards keeping Tampa’s lackluster RB’s in check.

Despite being on the road, this is one that we should take pretty easily. Tampa is weak in all the places that we meet with a strength. We on the other hand, have weaknesses (injuries, LB depth) that Tampa is ill-equipped to exploit. This shouldn’t be a hard game to win.