LAST year…the Redskins went 1 – 5 in the division, and 7 – 9 overall, after going 8 – 7 – 1 the year before. They posted a respectable 342 points (21.3) points per game. However, the 388 points they allowed, were tied for the most in conference, with New York. (Not the Jets, the giants). A second, consecutive offseason of self-sabotage, resulted in another uneven year for the burgundy and gold.

That was last year. Keeping in mind that the Draft will change some of this, the following is a report on how the team looks today, prior to the NFL Draft….

Alex “Likes that” too.

He’s a game manager who doesn’t make dumb mistakes with the ball, and has more mobility than his predecessor. The thing about managers, is that they generally are only as good as the staff around them. Given explosive weapons last year in K.C., Smith got out to a fast start, but soon cooled off. As teams figured out ways to corral his weapons, more responsibilities for making plays fell to Smith, and he did what has kept him in the NFL for 14 years: He didn’t make many big mistakes. (Or many big plays.) Behind him sits the competent Colt McCoy and Kevin Hogan (Browns) who they traded for, for some reason. (-)

Rob Kelley, Samaje Perine, and Chris Thompson. That’s it. That’s what everyone else is supposed to fear and game plan for. Perine is a high effort, straight- line runner, who runs with no flare or imagination. Kelley can be dynamic, but gets nicked up too easily. Thompson is best of the bunch and that isn’t saying much. Here are some quick numbers: 64. 39. 103. That’s 64 rushes, 39 catches, 103 total touches. In 10 games last year that’s what Thompson did. He doesn’t get a whole lot of work because of two more numbers: 5’8 and 191. He’s a change of pace/instant offense RB, who also returns kicks, so the coaching staff doesn’t want him getting too beat up. The problem with three distinct RB’s is that you always telegraph your intentions when one comes out. While the ‘skins may have 3 RB’s, they don’t really have one. (-)

Jamison Crowder again caught nearly 70 balls, but without a deep threat in 2017, he wasn’t nearly as effective underneath. Especially in critical moments. However, since he’s their best option at this position (like Chris Thompson at RB), it’s only natural that they don’t start Crowder. This year, the ‘skins are trying something new, and not starting a QB at WR. (Like they did last year.) And you know, it just might be crazy enough to work! Last year, in a 31-34 (loss) shootout with the Saints, starter and former first round draft pick Josh Doctson, exploded for career highs of 4 catches and 81 yards. (Straight ballin’, right?!) To play Robin to Doctson’s Barbara Gordon, the ‘skins went out and signed Paul Richardson (Seahawks).

Richardson is such a dangerous deep threat that Seattle let him sign elsewhere, for a salary they could have easily matched. (-)

Hamstring. Concussion. Cut himself shaving. Seems like even a change in the wind’s direction, will cause Jordan Reed to miss games. Luckily, the Redskins can fall back on Vernon Davis, due to his pact with Satan, that keeps him from aging. Last season, despite beginning the year as a back-up, Davis was third on the team in receiving yardage. Jeremy Sprinkle is more of a blocker than a receiving option, and for that reason, he’ll grab 1 to 3 garbage scores per year. (+)

It looks as if 4 of 5 starters from 2017, will be back for 2018. That sort of continuity and having players who already know the system, are always an advantage. There’s no questioning the individual talent of the players. The issue is keeping them upright and on the field. If the Redskins can manage that, then they’ll have an important building block. (+)

For the last few years, the ‘skins offense has produced, due to a having a QB with a gunslinger mentality, who was trying to prove his worth. Today their QB is a game manager who has no incentive to prove anything. As I said before, a manager (QB) is only as good as his staff (weapons). Like the QB, the weapons here are all better suited to being role-players than starters. Last year this unit scored 342 points. This year that number will likely be closer to 295 – 304. (-)

The cornerstone of this defensive line is Jonathan Allen. 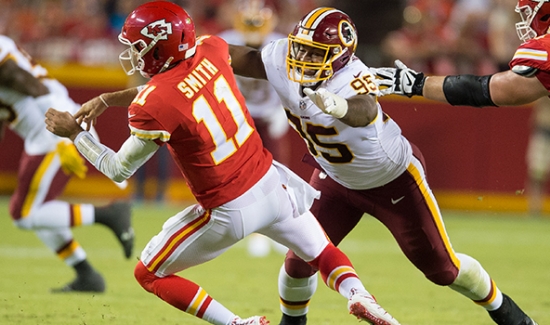 Much was expected of him after he was picked 17th overall in last year’s Draft. So of course after 5 games, he went down with a season-ending Lisfranc injury. This is before he was able to really settle into the NFL game. The team ended up having to rely on a steady diet of Matt Ioannidis and Stacy McGee. They combined for 71 tackles and 4.5 sacks (4.5 of those belonging to Ioannidis). Even when Allen returns, he has the rest of his learning curve to iron out, and has yet to experience 16 games effect on his body. On a defense that was 32nd (dead last) in the league vs the run, having the additional problem of not being able to rush the passer…that means this position is a liability. (-)

Acting as the NT for the ‘skins 3-4 system was Ziggy Hood. Hood was completely unremarkable as he contributed 0.5 sacks and 25 tackles to the NFL’s worst rushing defense. There are a few bodies at this position, but not even the starter is worth worrying about. (-)

Ryan Kerrigan as usual, had a very good statistical year with 13 sacks and his fist pick six in four years. Preston Smith added 8 sacks and 2 thefts of his own. Sadly, the very aspect of the ‘skins system which feeds their players stats, also makes their defense predictable and vulnerable. This position is talented, no doubt. Ironically, it’s prowess is the unit’s greatest weakness. (+)

Inside it was a tale of two Zachs. Zach Brown and Zach Vigil. The brown Zach started 13 games and made 127 stops last year. The other Zach had 6 starts and notched 56 tackles. He did this while filling in for Mason Foster, who went on IR after 5 weeks of trying to gut through a shoulder injury. When he’s been healthy for Washington, Foster has been more of a guy who makes tackles, not plays. And he’s the best of this group. Once again, this was the 32nd ranked run defense, and these are the same players likely to start in 2018. (-)

FS D.J. Swearinger had a nice individual season in 2017 with 4 picks and 10 deflections, and should be decent in 2018. All 195 pounds of Deshazor Everett is the SS, which could be trouble vs the run. Which is sad, since he’s never proven great at defending the pass. The rest: Montae Nicholson, with 6 starts sprinkled across 8 games in 2017. After that is (Kenny Ladler) a former Bill who hasn’t played a down since 2014; (James Sample) a former Jaguar who hasn’t played a down since 2015; (Orion Stewart) a former Bronco who’s never played a down, and a back-up from last year named Fish Smithson. His real name is Anthony, but he goes by Fish. On purpose. (His brother played for Green Bay and went by Shaky. On purpose.) Expect a high draft pick here. (-)

Josh Norman may be growing wistful for the days of Carolina. Instead of being the missing piece for a team on the rise, he’s slowly becoming a less and less feared defender, on a team that has done a nose-dive off of a cliff. Last year’s other starter was allowed to walk, and will be replaced either by former Cowboy Orlando Scandrick, or Quinton Dunbar. The position isn’t flashy, but it is sneaky solid. It’s a veteran group, three players deep, and they know 2/3 of the offenses in the division. (+)

By Week 8 last year, this team had already lost Jonathan Allen and Mason Foster to injuries. They’ll get both players back in 2018, along with the hope that their front seven is tougher to run against, inside the tackle box. The secondary is undersized at SS, but should be cagey at CB. The OLB’s are talented, however they play in a scheme that yields easy yards on the perimeter, which in turn yields easy points. This unit will be broken until they change the scheme. (-)

Tress Way is just not getting it done. For the third straight year, his Net Average was under 40 yards (39.0). His punts were returned an inexcusable 39 times for an appalling 435 yards (11.1 per return), and one score. Thus, the ‘skins have brought in Sam Irwin-Hill, to either challenge Way, or take his spot. The ‘skins may have found an answer, but until they prove it… (-)

Dustin Hopkins missed half of last year with a partially torn hip muscle, but once he was healed, the guy babysitting the position was kicked off the team, eliminating any question of how the Redskins feel about Hopkins. While his Field Goal percentage was only 82%, his kickoff average was a career best 64.4 yards, looking strong before and after his injury. The return average from his KO’s, was an impressive 17.4 yards. Long-range kicking is a huge obstacle for him however, as he as 0/2 from 50 or greater. He’s only 5/13 (38.5%) for his career from that range. Not exactly clutch, but the ‘skins are comfy with it anyway. (-)

There is far too much complacency in regards to this unit. Aside from KO coverage, they don’t seem to do anything well, and haven’t made any moves to address their deficiencies. It’s almost as if they’ve never heard of the hidden yardage battle. (-)

The Redskins have a defense that allows too many easy yards, and thus too many easy scores. They lack a special teams unit that can win the hidden yardage battle, or steal a close game. To win in recent years has required them to stage shootouts, which was no problem with a gunslinger at QB. That player however, was allowed to leave, and his replacement is not the sort of QB who can sustain a shootout, week in and week out. Expect the Redskins to spend a good portion of 2018 not even being in games. This is a team that could easily lose 12 games this year, but will more likely top out at 6-10.