DOUG Pederson and the Eagles won’t grace the field until Monday, which means the Four Things article I’d normally release Thursday, won’t hit until Friday. Needing something to write about until then, I decided to do a quick review of our division rivals. I’ll do one this week, during the Bye, and right after the regular season.

So lets dive in.

(Reading this in my Carl of ‘Aqua Teen Hunger Force’ voice.)

Big Blue’s offense is ranked 29th in the league, averaging 17 and a half, (we’ll call it 18) points per game. That however, is a misleading stat, since they put up at least 22 points in each of the last 4 games. The defense has yet to allow any opponent 30 points.

Offensively, this is half a team. They can’t really run the football and as a result, it makes QB Eli Manning a sitting duck in the pocket. In the last two games they’ve gotten good yardage out of RB Orleans Darkwa, but he has a 4 year history of being…let’s say “delicate”. (FYI: Last week’s 21 carries was the first time in 4 years that he rushed the ball more than 12 times in a game.) Like I said, delicate. While most people wouldn’t see season-ending injuries to WR’s Brandon Marshall and Odell Beckham as good things, it may actually turn out to be just that. While talented, both of those guys are headcases, and headcases are rarely ever good for a locker room. Further proof of that is the Giants got their first win of the year, after losing both nutjobs and having neither on the sideline during the game.

Defensively, I said in April that they’d miss DT Johnathan Hankins, and no truer words have ever been spoken. Last year they finished up as the 3rd ranked rushing defense. Today they are 25th. The fact is, the LB’s are just ordinary guys. Or bums. It’s okay to call them bums. With a better line in front of them, they do okay. However, without a great line, they’re being exposed on a weekly basis. There’s talent in the secondary, but there are also some behind the scenes personality clashes, that has led to benching CB Eli Apple, and suspending yet another headcase in CB Dominique Rodger-Cromartie. With all three of the team’s nutjobs left off the team plane, the team managed to T.C.B. in the Bronco’s high altitude hell-hole, bringing back a “W” for the New York faithful, (who didn’t already jump ship to the Jets.)

(No longer doing my Carl voice.)

Mathematically, the giants could run the table and finish 11-5. Realistically, the giants will have to find a consistent run game to entertain any hope of sniffing 7-9. The upcoming game against the Seahawks will tell a lot about this team going forward. Especially now that the locker room will be less chaotic.

While the team is 9th in points per game (25.0), they are 29th in points allowed (26.4). Offensively, the losses suffered during the offseason to their line (Doug Free (retired), Ron Leary (Broncos)) have taken a visible toll on their run game. 2016 rushing leader RB Ezekiel Elliott has seen his average yards per carry drop from 5.0 (through 5 games last year) to 3.7 so far in 2017. He’s also seen his rushing yards drop from 546 (through 5 games in 2016) to 393, on exactly FOUR fewer carries. As the Cowboys are a run first team, it’s easy to see why they seem to be stalling out.

Defensively, it’s just DE Demarcus Lawrence (8.5 sacks) and some guys. While some may want to blame Defensive Coordinator Rod Marinelli, the truth is that Dallas’s Front Office has no talent for spotting defensive talent. For example, DT Cedric Thornton was cut in favor of DT Stephen Paea who just up and retired last week, due to a knee injury that wasn’t even chronic. For another example, they threw a bunch of cash at CB Nolan Carroll and then just released him after Week 5, despite the fact that the team has been hemorrhaging points since they sat him (during) after Week 2. Project players like LB’s Jaylon Smith and Sean Lee, as well as DE’s Taco Charlton and DT David Irving, are why there is never any stability to build from on the Cowboys defense. They are the reverse of how the Offensive Line was built.

Offensively this team can still be an effective unit, even if Elliott were to miss time for any reason. The answer to their problem is that they have to be less of a run first team, and put more of the weight on QB Dak Prescott. Defensively, there is nothing to be done about this mess during the season. There simply isn’t enough talent on that side of the roster. If Dallas can find a way to put up 35 points per game, they can make a run for the division. Otherwise, they should start developing their 2018 Draft plan.

All things considered, the Redskins aren’t in bad shape at this point. They’re finding ways to win against teams like the 49ers and the slumping Raiders. They’ve also managed to keep all but one opponent (Philadelphia), under 30 points. They’ve even gotten their pesky Bye week out of the way early. Surely that has to be a good thing, right?

Offensively, last week they finally got around to starting their best skill player in RB Chris Thompson. QB Kirk Cousins sports a passer rating of 106.4, despite not having a true #1 or #2 WR anywhere on (or even near) the roster. Cousins has also only been sacked 8 times this year, and only four times since Week One vs Philadelphia. (4 sacks that game). (And two fumbles.) (Both lost.) (One for a touchdown.)

Defensively, Washington is 8th in the NFL vs the run, and they’ve picked off 5 passes for an average of 1 per game. (Only 12 teams have more than 5 interceptions. Philadelphia is one.) The Redskins allow 22.6 points per game, which is 19th in the NFL. If they were about to go against a top 10 Offense (one that was 6th in scoring, 3rd in yards, 9th in passing, 5th in rushing) it might seem like they were over-matched, but for the average week, it’s not a bad defense to have. Just not, you know, going against a top 10 Offense.

Overall, the Redskins aren’t in a bad spot. At least record-wise. As far as the schedule… There’s still plenty of football to be played, and “any given Sunday”, right? On offense since they can rely on their QB, maybe they’ll go nuts and help him out next week, by starting their best player for just the second time this season. On defense they seem to play better against teams already having offensive problems. Kind of a weird coincidence right? If they can continue to play opponents like that, this team will hoist a Lombardi at the end of this season.

So that’s the state of our division rivals as your Eagles head into Week 7 vs the Washington Redskins. The next time I do one of these, we’ll be heading into Week 11 vs the Dallas Cowboys. 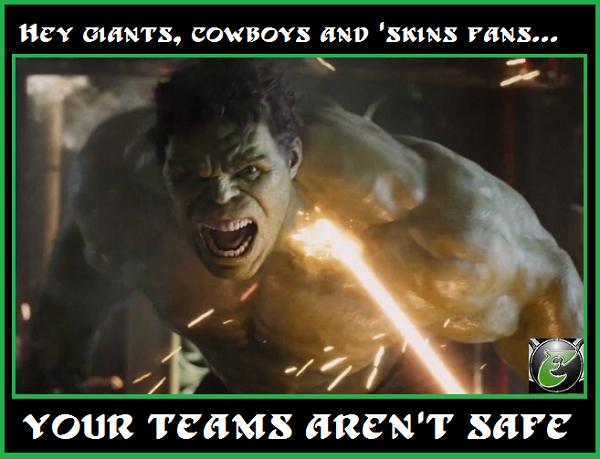