OVER the last several days, I’ve found myself being attacked by dozens of New England Patriot fans. Apparently I said something that offended them, when I said Tom Brady is not the Greatest Of All Time (among NFL QB’s). All I did was state A FACT, and it set off a tidal wave of poorly reasoned, badly spelled and poorly thought out responses. (I’ve posted some excerpts at the bottom of the article.)

Let the record show that I (and all other NFL fans), owe Dallas Cowboys fans a massive and sincere apology. Cowboys fans are not the biggest pain-in-the-ass fans in the NFL. That dishonor belongs to New England Patriots fans. Patriots fans are without a doubt, the least witty, most inarticulate, whiny, “sand-in-the-vagina”, group of cry-babies that can still be (loosely) classified as human beings.

The fact that Brady isn’t the GOAT, is too much for their tiny brains to process. They’ve chosen to lie to themselves, and they are incredulous that the rest of us won’t buy into their bullshit. It seems that their fan base’s idea, is to try and shout down the other 31 fan bases, until we all agree with the lie they want to tell themselves. This of course will never happen, so the fools have sent themselves on a fool’s errand. Appropriate don’t you think?

And yes, I did say that Brady not being the GOAT was A FACT. As in: It is not an opinion. It is a statement based on factual information. Here are those facts.

GOAT is not an official position in any sport. While each sport has a Hall Of Fame, no sport hands out an official GOAT award. It is a position entirely based on the consensus of public opinion. That means it’s just something most people think. No amount of yards, touchdowns, or even championship rings automatically qualifies a player. If that were the case then basketball’s Bill Russell (11 rings) would be the GOAT instead of Michael Jordan (6 rings). If pro football championships are the mark, then Otto Graham (7) “trumps” Brady (5). (See what I did there?) So factually speaking, Tom Brady isn’t, won’t be and can’t ever be officially defined as the GOAT.

As far as public opinion, if there were a consensus, then Patriot fans wouldn’t be getting so much push-back, would they? Think about it. Eight years ago, if you said Joe Montana was the GOAT at QB, you got almost no debate on the subject, regardless of fan base. It was a widely (if not unanimously) accepted opinion. Montana got that consensus. Brady hasn’t. Nor can he.

Brady doesn’t have and won’t get that consensus for two very important reasons:

1) Most fans know that the Patriots are the poster-child for cheating and poor sportsmanship. To the generation where everyone gets a trophy and even the losers get ice cream, ideals like sportsmanship are just arcane notions that old people talk about. However, there are still enough of us old-timers around (I’m 41), to say that we don’t trust the achievements of a guy who is known to cheat the game.

2) More importantly and more damning, are the 2008 and 2016 seasons. In 2008 Brady was injured in the first game of the year, yet the Patriots still finished 11-5 behind back-up QB Matt Cassell (10-5). 2016 saw Brady suspended for the first 4 games. During those 4 games, the Patriots went 3-1, behind 2 QB’s (one of which was a rookie 3rd rounder). (FYI: Over 16 games that 3-1 projects as a 12-4 record.) The fact that the Patriots are essentially an 11-5 team with or without Brady, suggests that he’s as replaceable as anyone else on the roster. It also implies that maybe, just maybe, Brady is merely the product of his system; and that any starting Patriot QB would do about as well, since that is exactly what has always happened. This would essentially suggest that Brady is in fact, nothing special.

So it’s clear. Brady isn’t the GOAT. Not in any official capacity, not in pro football championships won, nor by virtue of public opinion. In every and any way that could possibly mean anything, Brady falls demonstrably short of each mark. It’s laughable that some “people” ever tried to make this a debate in the first place.

But hey! At least these idiots love him: 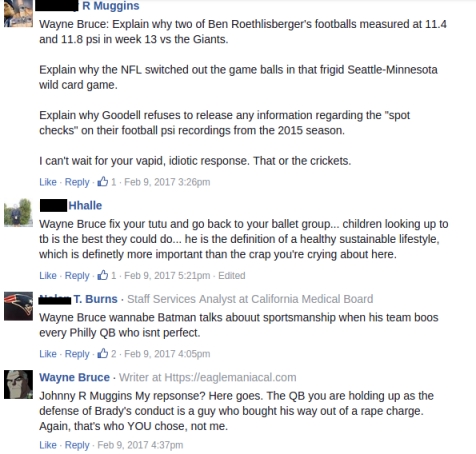