A PARADE DOWN BROAD STREET 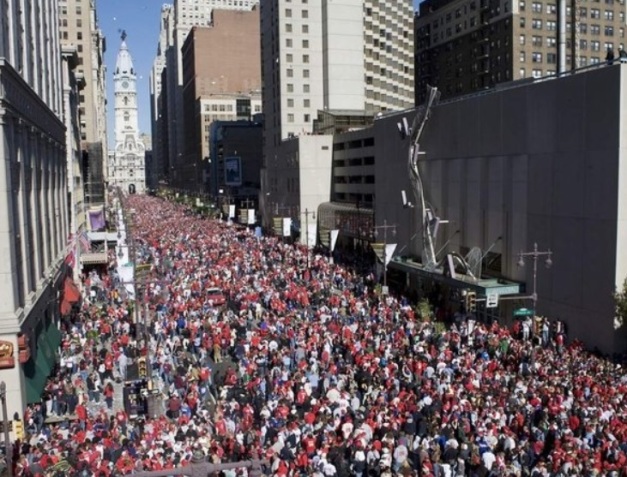 ONCE the Eagles win the Super Bowl, the organization will receive a replica of the trophy named after Vince Lombardi. The players and coaches will receive rings that they can wear (and brandish) on talk shows whenever they get interviewed. But what will we as fans get? We’ll get a parade down Broad Street. I for one would LOVE that. I’d love both the parade and the electricity that engulfs this city whenever one of our teams gets to the championship round. I’m far more interested in those experiences than I am in a trophy that will never sit in my house, or jewelry I’ll never wear. I can’t get hung up on hardware. Rings, plaques, trophies… Those objects themselves pretty much lack any meaning to me. Especially the Lombardi trophy. The Eagles alone own the man for whom the trophy is named. How big of a deal could an annual replica be, when you can say that no team can ever again pull off the feat that your team did? While winning a title has meaning, being able to show off trinkets does not. Frankly I don’t get why rival fans show off pictures these things. They’ll never wear them or possess them. It’s like bragging about your neighbor’s car. Worse actually, since at the very least your neighbor knows who you are. The parade however, would be all of ours. It would belong to athlete and fan alike. It would be a day and an experience that we all had in common. I have yet to post a single pic of the Phillies trophy, but a 30 minute video I shot of the Phillies parade is still up on my Myspace page (I just checked to make sure). The difference is that you and I own a piece of that moment. We share it. I’m looking forward to sharing another moment with my fellow fans, as well as the athletes who played and won to earn that moment. The hardware on the other hand…they can keep.

4 comments on “A PARADE DOWN BROAD STREET”