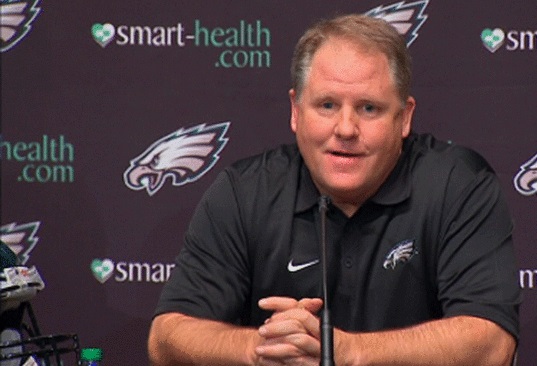 THIS week Cary Williams said that Chip Kelly’s conditioning system “didn’t necessarily work”. Considering that this team has run out of steam down the stretch for two straight years, (especially the Offensive and Defensive Lines), I’m thinking Cary Williams might be right about that.

You can line up with Kelly if you want, but from where I sit, it looks like Williams knows more about winning in the NFL. Williams has won a Super Bowl as a starter. In his only playoff game, Kelly failed to make any decent adjustments at home, against a dome team that was running an insultingly vanilla gameplan against their strengths. To see the playoffs and advance through them, Williams had to beat good teams repeatedly. Kelly is outcoached by +.500 teams on a regular basis.

Only one of these men has proven himself worthy of the NFL’s best.

More than that, upon our release of Williams, a team that has made a habit out of Super Bowls didn’t hesitate to snatch him up and peg him as a starter. Sorry folks, but I’d say Pete Carroll knows a bit more about what it takes to win in the NFL than Kelly does. Argue that point at your peril.

Kelly came to the NFL looking to change how some things are done, or to show that he knows a better way of doing them. So far he really hasn’t. Fact is, until he produces enviable results, his methods are largely going to be seen as quirky instead of innovative. I have yet to hear any sports pundits dismiss Kelly’s methods, but I have yet to hear anyone embrace them either.

Kelly’s conditioning system was built for players 17-21 years old, who only had to last 12 games, on a roster twice the size of an NFL roster. You can run those guys into the ground and if one or five guys can’t go, you’re drowning in depth anyway. The NFL includes guys in their mid 20’s through late 30’s, many of whom have injury histories, and depth is far more limited. Running your roster into the ground, instead of resting them… You can only push the human body so far before it stops building up and starts breaking down instead. You can get away with more of that when people are younger. (Remember being 17-21 years old?) Imagine if at your current age you had to do your work day TWICE a day, for the same money you’d make to do that same job ONCE if you worked anywhere else. Now imagine that despite all the extra work you put in, your rivals (working half as hard) reaped better results.