JORDAN MATTHEWS COULD BE A MONSTER 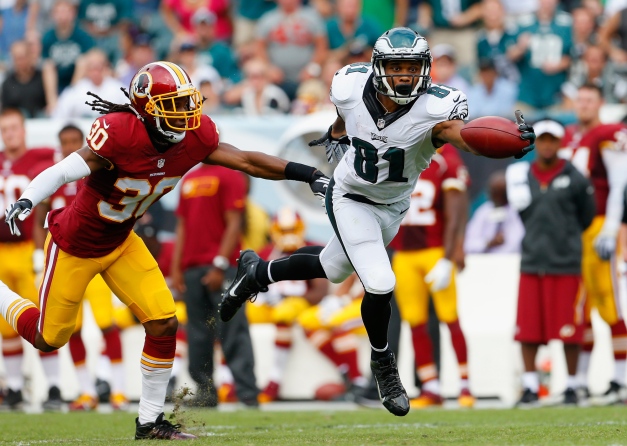 JORDAN Matthews is not the fastest WR, but he has other tools that should make him a monster. However, look at the pictures below and you may notice some big holes in his game.

Now these are just a couple of stills and they can’t, won’t, and don’t tell the whole story of what many fans noticed all year long. (Mostly because published pictures of incompletions are outnumbered something like 35:1 by photos of completed passes.) However, all season two things about Matthews kept jumping out. He doesn’t consistently fight for position or attack/high-point the ball when it’s in the air. And it wasn’t just Matthews failing to do those things consistently.

High-pointing and fighting for the jump balls are two things that coaches teach starting in Youth Football. I know this because my friend Joe Frazier coaches Youth Football, and he says that he teaches it. We both belong to a Facebook group called BirdGang Bangers, and it was not rare this season to see Joe posting (ranting) about the lack of fundamentals displayed by our own professionals.

I was content to tag the athletes with the blame for this until during the Ohio State/Oregon game I saw this:

During a “gotta have it” possession, on a “gotta have it” down, late in the game and behind in the score, Ducks WR Dwayne Stanford dropped a WIDE open pass. He dropped it simply because instead of attacking the ball, he was falling away as he caught it. Not falling. Falling away. As in, fading back in preparation to turn and run. Not quite running before the catch, but in there.

It occurred to me that Ducks WR’s had been doing that all game long. Then my stomach knotted up with a horrible question. What if they’re being coached that way? Not just the Oregon Ducks, but the Philly Ducks, I mean Eagles. What if this is a feature of our system, just to make it easier for refs to award full forward progress? It would be good for most moments in games, but it won’t make players fundamentally sound for moments when the system fails and athlete has to make a play.

I spent years hating (and writing about) our former WR coach Dave Culley, for the way he never seemed to be able to maximize WR talent here. (Terrell Owens mostly wouldn’t even work with him). Now I’m seeing that Culley’s successor, Bob Bicknell, doesn’t seem to know how to get the most of his charges either. I have to say that makes me concerned for the development of players like Matthews and Josh Huff. Matthews has the tools to be a monster, but I wonder if he’ll get the coaching he needs to fully develop those tools.

Perhaps the Eagles would do well to give Coach Frazier a call.

12 comments on “JORDAN MATTHEWS COULD BE A MONSTER”