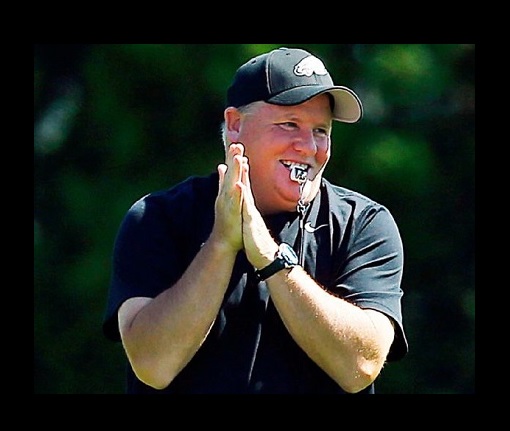 SO Chip Kelly now has the final say on personnel decisions. Really? (LOL.) Lots of fans (the ones not as smart as us), have gone all frothy over that news. Functionally speaking, how is that different from a week ago? While others had input in those decisions, ultimately the guys we brought in, were Kelly’s guys.

The biggest difference between now and last week is, no one will argue with Kelly over “This player instead of that former Duck player” or “That player over this PAC12 player”. Now Kelly gets the final say without any argument first. It’s more of a stress saver for both he and Howie Roseman, than it is any actual, functional change.

What has me cracking up, is seeing people who are actually excited that Kelly has the reigns now. Like he’s been held down or was oppressed since he got here! Seriously. Show me another NFL roster with FIVE Oregon players on it. The closest is the giants with 4. Only one of those were drafted (in the 7th  round), by the giants, (2 were veteran FA additions, 1 an UDFA).

We drafted 2 (Josh Huff  and Taylor Hart  ), in the first 5 rounds just last year alone. For the last two years we’ve had Jeff Maehl  and Brandon Bair  taking up roster space. That’s it for Ducks if you don’t count attempts to shoehorn players like QB Dennis Dixon, RB Kenjon Barner  and WR Will Murphy  (who in three seasons at Oregon, totaled 24 receptions, 240 receiving yards, and one touchdown in 30 COLLEGE games and still collected pro money from US), onto this team.

Remember last year when Kelly hugged Taylor Hart and told him “We’re putting the family back together”? Brother, you had better believe it.

I included links in their names so you could see the level of talent we “kept from falling into enemy hands”. (LOL!) The only Duck on this roster prior to Kelly’s arrival was LB Casey Matthews. Long considered a flop by fans, Matthews has so far, been BY FAR, the best Oregon player Eagles fans have seen in an Eagles uniform.

And it’s not just the Ducks. It’s all the soft, candy-assed players who’ve come aboard since Kelly got here. We weren’t exactly brimming with roughnecks under Andy Reid either, but these last two years have been flat out ridiculous, and the on-field results are telling the tale.

Last year we had O-linemen who struggled to run block. RUN BLOCK! Please, if you played O-line before, weigh in and tell your fellow fans how ridiculous that is. I sound like a blowhard when it’s just me doing it. Somebody else please, if you played or coached it; tell people just how silly it is that your O-line can’t open a hole on a 22 Dive, on 2nd and 6. It goes right to the heart of the issue!

But now Kelly has full control so it’ll be different, right? Food will taste better, the sun will shine brighter, sex will feel better… MY ASS! This “promotion” changes nothing except who gets the shit shoveled onto their plate if it doesn’t work. By the way, there’s a reason I put the word promotion in quotation marks. It’s not a sign of disrespect at all, and when I bring it up again, you’ll see why and you’ll agree with why I did it.