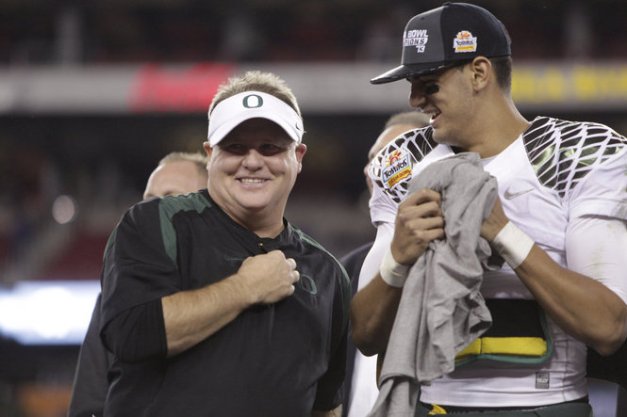 Chip Kelly and Marcus Mariota. Photo courtesy of the internet

GIVE QB Nick Foles 15 or 16 starts in 2014 before pronouncing judgment on him.

Due to his broken collarbone, Foles won’t start 15 or 16 games this season. The injury will keep him out for 6-8 weeks, so it’s highly likely that his 2014 is over. Even if he comes back in 6, if we’re still playing for anything, he’ll likely be carrying a clipboard.

So to answer the question of whether or not Nick Foles is a franchise QB for the Eagles, the answer is: No.

If you disagree then you probably thought Michael Vick was also a franchise QB for the EAGLES. The knocks on Vick were that he couldn’t stay healthy and was a turnover machine.

Here are some cold hard facts:

Foles has slightly better numbers in all areas, but none of those numbers say “Franchise”.

Meanwhile Mark Sanchez is simply auditioning for his next team. We will be drafting a QB in 2015. Oh, and at least one Guard.