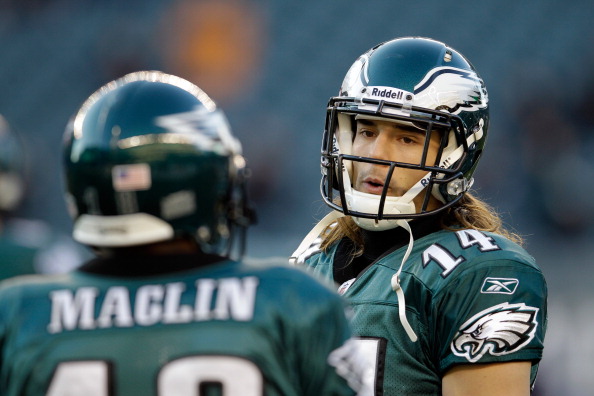 IN my last article I showed you the hidden culprit behind why our Offense isn’t nearly as lethal or as machine-like as it was last year. Most fans want to chalk it up to injuries on the Offensive Line and look no further than that. That is a mistake.

It’s true that the Offensive Line being beat-up affects what kind of holes RB LeSean McCoy gets to run through, and the time that QB Nick Foles gets in the pocket. However when McCoy breaks the line of scrimmage and STILL can’t get himself free like he could last year, that’s not the O-line. When Foles steps into a pass that sails too high, or too long, that’s not the O-line. In fact who do you “blame” for Foles holding the ball too long? And the O-line has nothing to do with WR Riley Cooper going off a cliff.

Teams didn’t line up their FS 15-20 yards deep just because of his 4.4 speed. He also could change direction in a flash, has fairly reliable hands, and unlike a lot of 4.4 guys, can run the NFL route tree. As a result, teams warped their defenses to try to compensate and not make scoring TD’s too easy for Jackson

While we don’t have anyone on the roster with Jackson’s individual abilities, we do have a guy who can warp a defense: RB Darren Sproles. He’s every bit as dangerous in space a Jackson was, break tackles better, and can run most NFL routes from the WR position.

Put in motion to the slot, you can bet your ass a Safety would follow him out there. It’s not like you can cover Sproles with a Linebacker. Instead of a Safety playing extra deep, you have one playing extra shallow. And it’s still a warped defense isn’t it? And you know…when that Safety comes down, someone on the outside has a 1-on-1. That leaves a lot of options for Foles to place a ball.

You could do this in multiple formations, with multiple packages…It doesn’t have to be a restrictive number of plays at all.

So that’s it. You motion Sproles out like he used to do in New Orleans. (Man do they miss HIM!) That’s how you create space for McCoy and Cooper. That’s how you give Foles wider windows to throw to. That’s how you solve the DeSean Jackson problem.

7 comments on “FIXING THE DJAX PROBLEM”