MAY THE STRONGEST SAFETY WIN 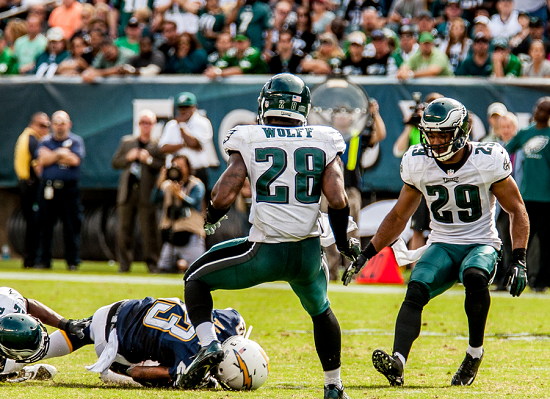 THE question of who is going to start at SS opposite Malcolm Jenkins came up yesterday. Some fans say Nate Allen, some say Earl Wolff. Some are even holding out hope for prospect [Calvin Pryor]. Unlike most Eagles questions this one has a simple answer. And it’s staring you in the face.

This team’s biggest need right now is a top shelf pass rusher, so I wouldn’t put my money on drafting a Safety high. Unless he falls into the 2nd Round, I’d rule out Pryor.

Nate Allen is here on a 1-year deal. That indicates that he’s not seen (at least right now) as a long-term solution. He’s still young enough to have a breakout season and rake in some cake in 2015; but with the Eagles already cash strapped for 2015, I wouldn’t bank on seeing Allen here past 2014. If he’s really blowing it up this season, they could always sign him to an extension during the season and trade him prior to any 2015 salary obligation. (At least I’d do it that way.)

The Birds already had Earl Wolff when they brought back Allen. If they wanted to start Wolff on Day One, there was no need to re-sign Allen.

The handwriting on the wall says that barring a kick-ass Training Camp, Wolff opens the season behind Allen, and is slowly moved into a starting role somewhere around Week 7-9.

I think Allen finishes 2014 as the starter if Wolff doesn’t look ready by Week 9. By that point we’re talking playoff push. If it’s a tight division and the Safety play is solid, you don’t rock the boat, you “dance with the girl who brung ya”.

But I’m interested to hear who you would start and why? Poll and comments right below.