DWAYNE HASKINS WILL GET SKINNED

REDSKINS fans are excited about rookie QB Dwayne Haskins. Reports out of Richmond VA, indicate that he’s lighting it up out there. Some say that he may be ready to challenge for the starting spot, when training camp opens for that team.

This news has their fans JACKED!

But should it? Let’s roll the tape back a bit, so that we’re all on the same page. Let’s do a quick ‘schmiel-schmazel’ and get off on the same foot here.

Haskins played just two seasons of college ball. He appeared in 8 games with 0, I say again, ZERO starts in his sophomore year, and started all 14 games in his junior year. That’s it. He was a first round pick based off of 14 college starts.

You know what? Whatever. If a team wants to take that gamble, who am I to knock their philosophy? People take big gambles because generally when big gambles pay off, they are life altering. So I can’t, don’t, and won’t fault the ‘skins for swinging for the fences. Why live small?

What lifts the corner of my eyebrow is, when Redskin coaches say that a guy who on January 1st started just his 14th college game, might be ready to beat out a 7 year NFL veteran, based on a few springtime games of catch, played in shorts. Whoa Nellie! Pump the brakes, son. Pump the brakes.

This means that Haskins is probably being hyped by the Redskins brain-trust (oxymoron), to make sure that owner Dan Snyder (total moron), doesn’t see a dip in tickets or merchandise sold to fans (the exploited morons).

Either that or QB Case Keenum is just indefensibly awful. Which would mean that the Redskins would have no depth, and are just serving up the rookie as equal parts “might as well” and hoping that he catches lightning in a bottle. 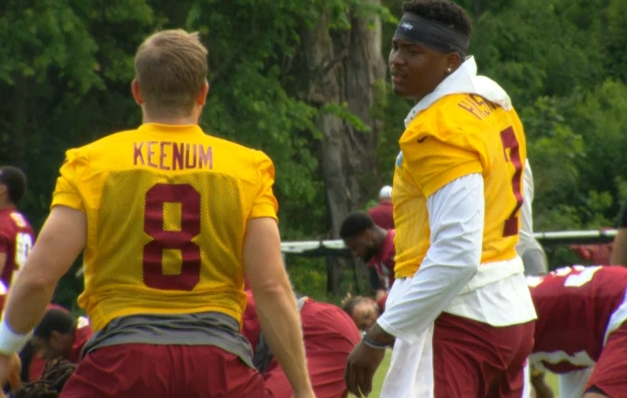 Keenum’s jersey number would have beaten him in the 2017 NFC Championship. You like that?!

Redskins fans won’t hear this, but if you aren’t a Redskins fan, then here is why the deck is stacked against Haskins ever panning out:

He has never experienced the phenomena of teams getting tape on him, and being ready for him the following year. With just 14 collegiate starts, he hasn’t played enough ball against grown men, to know for himself, exactly what he is. This means that when the corners get dark, he has no experience with finding his own way out.

It’s foolish to question any young football player’s physical gifts. It’s common practice however, to forecast a player’s ability to handle the mental aspects of pro football. The reality, the bottom line is this: Haskins has no coping tools.

He played at Ohio State. He was always surrounded with some of the top talent in the nation. The Redskins are the opposite of that. He is going to have to adjust to the idea that though the team he’s on is the most talented team he’s ever been on, it’s near the bottom in talent as NFL teams go.

Oh, it gets worse!

He has to make sense of those two pieces of information, while managing his emotions, and the expectations of those in the huddle around him, despite their inability to help him deliver on their expectations. To say nothing of what opponents are trying to do to him. Expect the NFL to skin this kid alive. 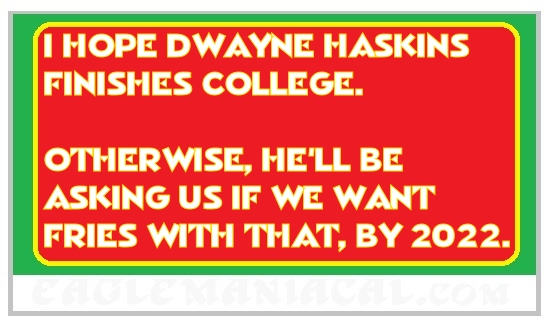