DEFENSIVE Tackle Anthony Rush is a name that likely escapes most Eagles fans, but it shouldn’t. When I bring him up in conversation, people’s eyebrows knit together and you can see them mentally searching for the name. That’s sort of a travesty in a city THIS knowledgeable about football.

In 2019, The Eagles got a ton of press about our Practice Squad players stepping up and contributing towards us winning the NFC East. The names that always came up however, were WR Greg Ward, RB Boston Scott, and to a lesser extent TE Josh Perkins. DT Anthony Rush? That name always seemed to be written in invisible ink.

Once we lost DT Malik Jackson and DT Hassan Ridgeway, we started shuttling in bodies like DT’s Albert Huggins and Akeem Spence. Spence didn’t hold the point of attack worth a damn, and soon found himself off the team. Huggins came later, played a few games and then went back to the Practice Squad.

Rush was signed to our Practice Squad on October 21st. He was on the active roster and in a game on October 27th. Rush’s 9 tackles in 9 games didn’t tear up the stat page, but he was about as statistically productive as DT Timmy Jernigan, while possibly being better at stacking blockers vs the run.

Most importantly, Rush gave the Eagles a legit rotational player, which allowed DT Fletcher Cox to focus on his own area, and maximize his own effectiveness. Until that point Fletch had been over-extending himself, trying to help out guys like Ridgeway, Spence and Huggins. You could actually see him starting to wear down.

Rush however, doesn’t need a babysitter. He proved to be able to stack blockers, play on the other side of the line of scrimmage, and make solo tackles even when engaged. Rush allows Cox to be the guy we saw in the Seattle playoff game, because even when Jernigan steps out, there is a level of consistent play at the other DT spot.

The combo of Cox, Jernigan, and Rush already works. If we can add to that, awesome! Just don’t dismantle it. Keep Rush on the active roster, and see if we can turn up the heat when get Jackson and Ridgeway back.

GREAT win today, but let’s not go nuts celebrating it. It was just the Jets, being piloted by an inflatable QB.

Most of what we were able to do on Defense today (10 sacks, 2 touchdowns) came by virtue of their inexperienced QB, not getting many reps this week. As a result, the poor guy was a wounded lamb, fed to a full-grown lion. He repeatedly held the ball as if he had called “spots” and was counting to 10. It was almost too sad to watch. Almost.

Meanwhile his coach seemed indifferent to offer him any help. The play-calling was horrid, as literally (no typo or exaggeration here) EVERY play in the 1st quarter was run through RB LeVeon Bell (15 – 43 – 2.8 – 0 – 0 / 7 – 45 – 6.4 – 0). No other Jet player touched the ball until the second quarter. The Jets pay actual money for this level of coaching.

If the name sounds familiar, it’s because Scandrick was a Cowboy for 9 years. We signed him in the offseason, but he didn’t make our final roster. Because of injuries at CB, we signed him off of his couch this week, and he gets two sacks, two forced fumbles, a recovery, and a score.

1) Show up: I literally said that if we didn’t get lost crossing the street to the stadium, we were 40% of the way to a victory. Well, we showed up. We were sloppy at points (C Jason Kelce’s bad snap, the muffed punt that either hit a foot or didn’t), but we showed up. (DONE)

2) No liberty for Bell: In regards to covering LeVeon Bell I said “We need to sit on and jump a couple of passes to him. Maybe we can get a defensive touchdown or two out of it.” Well kiss my grits, we got our first defensive touchdown doing just that. We also kept him, and thus the Jets offense, under wraps all day. (DONE) 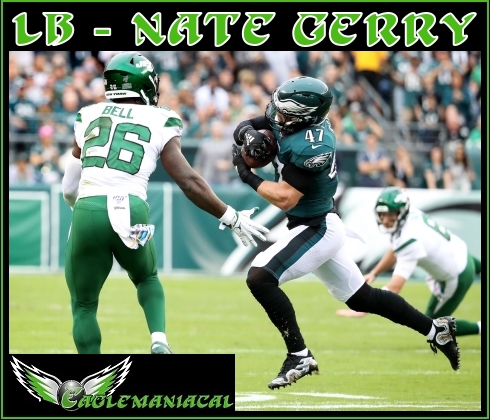 4) Paint by numbers: We did nothing fancy. Aside from a 3rd and 1 where we threw an incompletion, which set up a 4th and 1, that we didn’t convert, we almost looked like a preseason team that was trying not to give too much away. Toward the end we even sat Carson and put LT Andre Dillard in for a few snaps. It was glorious. (DONE)

This week we put up a perfect 4 for 4, even though admittedly one of them was really low hanging fruit. That brings the season tally to 10 of 20. Next week we travel to Minnesota for the start of a three game road trip, that will remind everyone of why we want to set up home field advantage.

We could have looked better. Aside from Jordan Howard, our RB’s were pretty ineffective running the ball. If getting off to fast starts is important to this Offense, HC Doug Pederson is going to have to stop trying to make a starter out of rookie RB Miles Sanders (9 – 15 – 1.6 – 0 – 0 / 4 – 49 – 12.2 – 0) who was hitting holes in this game with as much heart as Bernie Sanders.

Again, it seemed we weren’t trying to show much, and we may be getting WR DeSean Jackson back next week. So I’m not very concerned about the Offense.

My concern is with the Defense. The way we played today still allowed a “deer in the headlights” QB, to complete 57% of his passes, to a less than stellar receiving corps. Next week we get QB Kirk Cousins throwing to WR Adam Thielen. It would be nice to get one or two CB’s back by then.

In the meantime, because of this 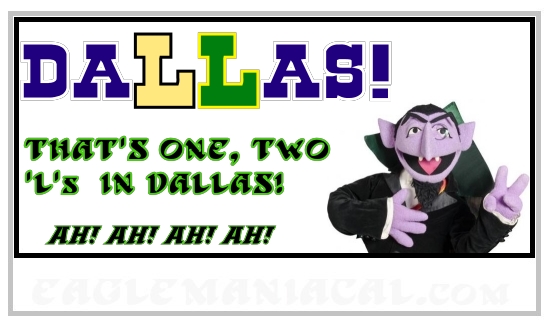 the Eagles appear to be atop the NFC East. At least according to the NFL Standings page. They may change it later, but for now it looks good to be up there.

APPARENTLY the preseason is no longer a period for Starters to knock off rust and sharpen edges. That leaves as it’s only function, to serve as an elimination chamber for the bottom 24.6% of the roster.

Seriously, of the 53 man roster to assemble, 40 of them (75.4%) started OTA’s as locks to make the team. That means only 13 spots were EVER up in the air. Six of those now look to have been locked down by, WR J.J. Arcega-Whiteside, T Halapoulivaati Vaitai, G/C Stefen Wisniewski, DE’s Daeshon Hall and Shareef Miller, and LB L.J. Fort.

So over these next two weeks, this team will play two games, to decide on 7 players. Most of whom will spend much of the season not being among the 46 who actually dress. 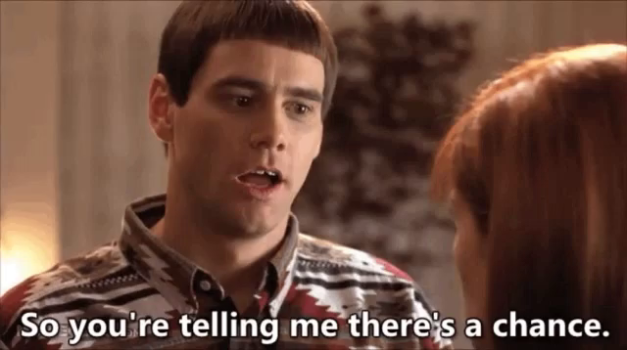 These next two games basically seem like “Change my mind” games for players like RB’s Wendell Smallwood and Josh Adams; WR’s Marken Michel and Mack Hollins; OL Matt Pryor and Jordan Mailata; DL Josh Sweat and Treyvon Hester; LB T.J. Edwards; SS’s Andrew Sendejo, and Johnathan Cyprien. (I think we all have always known who our 6 CB’s will be.) Basically this is the week that Special Teams gets built.

Those players need a strong showing over these next two weeks, to create a numbers crunch on another part of the roster.

So let’s talk about the Four Things we need to focus on this week versus the Ravens:

1) Root for your guy: If you have a pet long-shot that you’ve been rooting for, now is your time to shine baby! Send some psychic vibes out, and if your guy gets makes the cut, you can claim credit for helping. My pet long-shot: WR Greg Ward. It would have been TE Will Tye, but with TE Richard Rodgers missing so much time, and Tye playing well, it’s unlikely that Tye needs any help.

2) Hassan Chop: The Eagles coveted DT Hassan Ridgeway for years, and so traded for him during the 2019 Draft. He suffered a concussion in our first preseason game and missed the second. He’s back at practice so, it’s likely he’ll play. The question is can he legit beat out Hester? He needs to show up here. 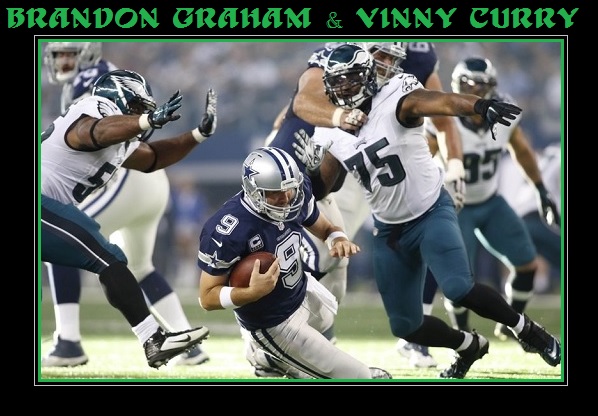 Never thought I’d use THIS card again. Wow. You can even see LB Mychal Kendricks in the background there.

3) Starter Watch: Last week, a handful of starter level players (SS Malcolm Jenkins, DE’s Brandon Graham and Vinny Curry) asked Head Coach Doug Pederson if they could play at least a little. It will be interesting to see if those same players play a little this week, or if more players decide to join them.

4) Staying focused: At this point, unless you’re rooting for a guy, there are no stakes. It will be hard not to channel surf, but try not to in the first half at least. That feels weird to say, because this used to be the game where Starters played an entire half, and you got a good feel for what they were trying to hang their hat on.

Beyond that, who really knows. Expect a lot of flags as players desperate to get into the “maybe” conversation, play too aggressively or carelessly due to adrenaline and emotion. Players like: DE Eli Harold, CB Orlando Scandrick, and RB Donnel Pumphrey.

Baltimore has played their Starters in both games so far, suggesting that they follow the traditional preseason model, not the new one that we’re on. Odds are that both from a talent standpoint and a polish standpoint, they will eat us alive if we spend another game serving sheep to lion.

And it could get ugly, early.