SEASON Reviews are usually done at the end of the season. (Duh.) A few are done at the halfway mark, and/or at the end. This year, Eaglemaniacal.com will treat the season like a game, and break it into four quarters. Since football is a hard sport, we’ll take a hard look at where our team stands at the moment (in relation to where it started), and where it needs to go from here. 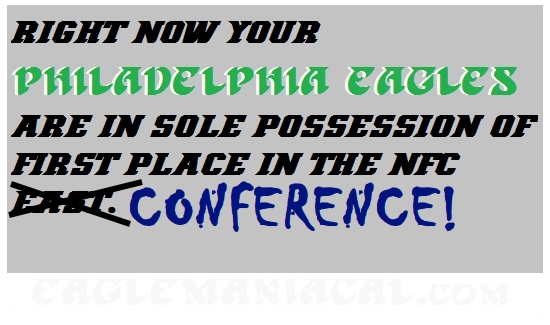 The big story this quarter was the season-ending injury to QB Carson Wentz (ACL) vs the Rams. Our back-up QB stepped in, finished that game, then helmed tough wins over the giants and Raiders, to give the Eagles home-field advantage throughout the playoffs.

QB: (D) Nick Foles took over for Carson Wentz after Wentz was lost for the year to a torn ACL. I’d like to grade Foles on a curve due to clearly mitigating circumstances, but I won’t. Part of his job is overcoming adversity, and so far he hasn’t shown the ability to do that. He doesn’t need things around him to be perfect for him to be effective, but he does need things around him to run efficiently. When things run well, Foles can be downright dangerous, but if something goes off the rails, he’s decidedly ordinary.

RB: (D) In the last 4 weeks, our top 3 RB’s have 1 touchdown on 94 combined touches (rushing and receiving). Part of the problem has been a deliberate decline in usage. Week 14 saw them rush the ball 28 times. Week 15 saw them rush 25 times. Week 16 shrank to 21 rushes, and Week 17 was just 16. This lack of production makes it easy to focus on taking away the passing game, and it helps to tank the entire Offense, Doug.

TE: (B) This position continues to help move the chains. Even when Zach Ertz had to miss Week 14, Trey Burton

stepped up and had the biggest game of his career. One thing that does seem to have disappeared from this position, is it’s willingness to attack down the field. Some of that is due to buying time while chip-blocking to assist the LT, but we have to find a way to get that missing aspect back.

WR: (F) In the last 4 games, Nelson Agholor has caught 22 passes for 169 yards, for an average of 7.6 yards. In none of those games did he average even 9 yards per catch. And it gets worse. This morning I saw Alshon Jeffery on a milk carton. He was smiling and holding up two fistfuls of cash. Torrey Smith told us he was just going to get cigarettes. That was two weeks ago! Meanwhile Foles is sitting in the rain, waiting for a ride…

OT: (B) Foles has been sacked 5 times in 3+ games. Wentz was sacked 28 times in 14. Either the line is getting better, or Foles is just not getting caught with the ball in his hand. Credit also the TE chipping, and RB Corey Clement being in there to help LT Halapoulivaati Vaitai on 3rd downs.

OG: (C ) This is a mixed bag since Stefen Wisniewski got hurt. Chance Warmack is clearly the better Guard between he and Isaac Seumalo, but his rust was on display with all the pressure he allowed vs the giants in Week 15.

C: (D) In recent weeks Jason Kelce has been erratic with his shotgun snaps. This is an easy way to give the ball away for a cheap score.

DE: (C ) Chris Long has turned in 2 sacks and 2 forced fumbles in the last four games. Aside from him, sack production is still down from where it was before the Bye. This position has been decent at setting the edges, but there’s been some fall-off during this last quarter.

DT: (C ) This position has not produced a sack since Week 12, nor a fumble since Week 1. It has been stalwart vs the run and covering for a deficiency at MLB since we lost Jordan Hicks Week 7. Perhaps the new player at MLB, will allow the DT’s to become more impactful again.

has been great this quarter as a mistake eraser and tempo setter. Mychal Kendricks has been somewhat up and down, but his role did seem to change slightly after the Hicks injury.

MLB: (D) This grade is only this high because we now have Dannell Ellerbe to rely on in this spot. Between Week 8 and Week 16, this position looked like a missile had hit it. Joe Walker just can’t play. Najee Goode lacks the physicality for the spot, and for three weeks we started no MLB and opted for the Nickel instead. (Two of those games were against the Rams and Seahawks.) It seems like we’ve hit upon a player now, so maybe everyone else on the Defense can stop covering for a deficiency, and get back to being fully effective themselves.

S: (D) This position has not recorded a pass break-up or interception since Week 12. A lot of that had to do with bringing Malcolm Jenkins down into the box due our MLB deficiency. A lot of attention has been paid to our CB’s biting on double-moves, but more frequently we are giving up high percentage slant routes that carry no physical consequences for working our middle.

CB: (C ) Ronald Darby has made it clear that throwing the ball near him could be hazardous to your offense. Jalen Mills on the other hand, has recently looked every bit like a 7th round draft pick. Patrick Robinson has made a solid case for the Eagles to offer him another one year deal to be the Nickel next year. That is of course, if Rasul Douglas doesn’t get a shot at the spot.

LS: (A) Rick Lovato got himself a tackle Week 16. Yay. Other than that his snaps have been reliable.

P: (A) Donnie Jones has punted the ball 22 times in the last 4 weeks, but we’ve surrendered just 36 return yards. This has helped set the Defense up and helped us gradually win the hidden yardage game.

has been great over these last 4 games. He’s 8 of 9 on field goals and 9 of 9 on extra points. The one area of concern is, since the weather in Philly’s winter weather rolled in, his kickoffs have gone down from 63.2 to 52.8 yards. Much of that has to do with the ball itself being harder to kick, but still it’s something to keep an eye on.

PR/KR: (C ) Our return game is competent, but it won’t scare anybody.

We’ve lost a player who many would consider the NFL’s MVP, and still we managed to go 2-1 without him. That one loss was a 0 – 6 “defeat”, in which our rival played their starters the entire game, while we pulled ours in the first quarter. Along the way we secured home-field advantage throughout the playoffs up until the Superbowl.

The regular season is over. We are now in the post-season. There is no quarter given here. Not by the calendar, nor the fans, nor the opposition to come. There is however, a mission, and it is this: