Three straight wins, and we’ll have done all we can to get ourselves back to the postseason. We’re gonna need some help, but this was one hell of a start on our part. We showed the world that the Rams are mortal.

These are the faces of men who were just mushroom stamped.

Impressively, Foles wasn’t sacked once in the entire game. Most impressive however, was how Head Coach Doug Pederson stuck with the run game, despite it not yielding a bunch of huge plays.

Looking at the one sack we got all night (from DT Fletcher Cox (2 – 1.0 – 0 – 0)), doesn’t tell the story of the kind of pressure the Rams QB was under all night long. A better indication might be the 2 interceptions he threw us. 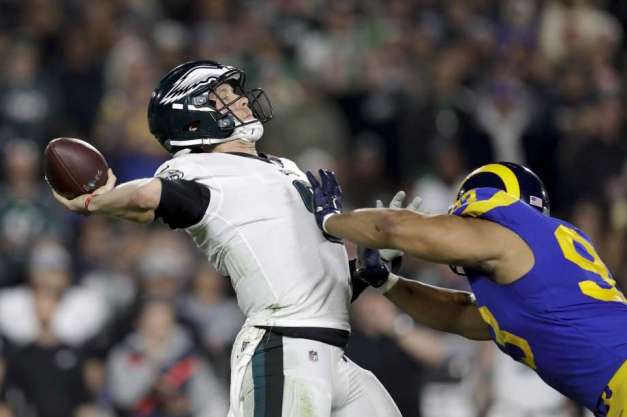 1) Roof It: Throw that monkey DEEP! Did we? Did you see that Alshon Jeffrey stat line? We used play-action the way God intended, and it helped us get that coveted “W”. It also helped us put the world on notice, that the Eagles ain’t laying down for nobody. DONE.

2) 25 Handoffs: Play-action is meaningless without actually running the ball. So we had 28 handoffs, and 2 QB runs. The result was clean and healthy Nick Foles at the end of the game. DONE.

3) Tween Scheme: Due to the Nickel package being used as much as it was, LB Nate Gerry (2 – 0 – 0 – 0) wasn’t on the field as much as anticipated. That said, the Eagles did shutdown the Rams run game, and despite 55 pass attempts, kept the passing offense from scoring. NOT DONE.

4) Something Special: Our Special Teams didn’t try anything tricky or gimmicky. We didn’t need it. NOT DONE.

So, this weeks Four Things score is a solid 2 out of 4. This is fine given that we’d didn’t need one, and only technically didn’t do the other. That brings the season tally to 24 of 56. Next week we host the 10 – 4 Houston Texans, who are currently leading the AFC South.

Any game that leaves a division leader asking:

is a great game. I’m thrilled with the outcome of the game. Still, there were a couple of things that bugged me about it.

First, we need a more physical RB. Our current RB’s tackle way too easily. We left entirely too many extra yards on that field last night. Second, reserve FS Corey Graham (1 – 0 – 1 – 0) makes too many business decisions in run support. I’m thankful for the 2 turnovers he’s collected recently, but this diving at ankles without bringing his arms, has got to stop.