WHAT if I told you we could make our Holder a player that opposing coaching staffs were concerned over, and even practiced drills for?

In 2017 Punter Donnie Jones was the Holder for K Jake Elliott, but he just retired. (Right after I wrote the original version of this installment.) That leaves Cameron Johnston as our P, and de facto Holder. Nobody ever gives much thought to the Holder. Generally if he gets the ball down quickly, and gets the laces right, that’s about all most fans want from him.

However, we can get more out of that position.

The smartest and most aggressive move, would be going with a back-up QB as the Holder. After running just one early season field goal fake, teams would stop lining up for a block, and focus on getting men back to cover for a fake. Then Elliott could operate without having to rush his kicks. That in itself could really help with his accuracy. 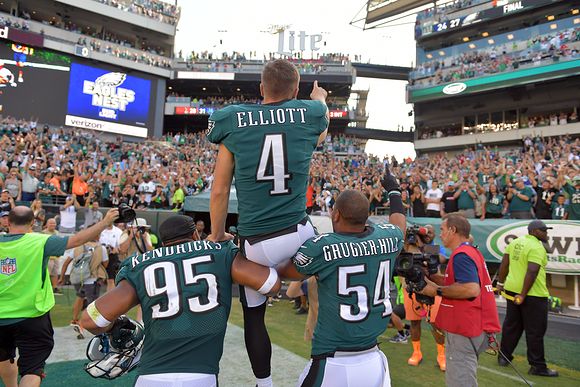 To get the best out of Elliott, the smart move would be to name a Holder now, and ink him to a contract as long as Elliott’s. If that’s done soon, they could get some work in even before OTA’s.

Any back-up QB could handle that duty, so Nick Foles or Nate Sudfeld would be fine. However, if you really want to see opposing coaches shit their pants whenever we line up to kick, then using WR Greg Ward is the way to go.

Ward is a former college QB whom the Eagles converted to WR, so that right there tells you he has better speed than the average QB. His experience as a passer under pressure would make throwing against a block attempt almost a breeze. All that while giving us that catcher/runner/passer/Special Teamer versatility that we’ve enjoyed from TE Trey Burton since 2014.

This move is easy, it’s cheap, it’s dangerous, and not many teams can copy our approach to it. It has the ability to make our Kicker better, and scare opposing coaches out of even wanting to “ice” Jake Elliott, for fear of giving Head Coach Doug Pederson a chance to hurt them worse.

We need to do this.