SEASON Reviews are usually done at the end of the season. (Duh.) A few are done at the halfway mark, and at the end. This year, Eaglemaniacal.com will treat the season like a game, and break it into four quarters. Since football is a hard sport, we’ll take a hard look, at where our team stands in relation to where it started, and where it needs to go.

Here at the midway point, we’ve already won as many games as we did all last year. We swept a division rival that we hadn’t even split with in years. We have the best record in the sport, and people are no longer questioning “if the Eagles are for real.”

I could go on, but that might seem too much like being satisfied with not being guaranteed .500 yet. There is so much more to be done.

QB: (A) QB Carson Wentz leads the NFL’s 11th ranked passing offense, and 4th ranked scoring offense. He is taking care of the ball, and making gutsy plays to keep his team on the field. His name has also come up in a few early MVP discussions. Not a single complaint here.

RB: (A) The NFL’s 5th ranked rushing offense, features a three-headed backfield where no one is griping about how little they get the ball. Quietly, RB LeGarrette Blount is 10th in the league in rushing yards (467), and 3rd in yards per carry (4.7), among players with 80 or more carries. The addition of Jay Ajayi adds depth, or maybe he’s the future after 2017.

TE: (A) Zach Ertz leads all NFL TE’s in receptions, yards, touchdowns and first downs. Trey Burton has only 9 catches so far, but 5 have been first downs and 1 was a score.

WR: (C ) This is VERBATIM what I said last quarter, and every word still fits to a “T”: They block downfield and clear out space for the run game, but more is to be expected of a #1 and #2 receiver, than to be respectively #2 and #4 on the team in receptions. Alshon Jeffrey is on a 1-year prove it contract, and isn’t making much of a case for a big payday, in league flush with WR talent. Torrey Smith is failing to pull in too many deep throws. If he doesn’t actually start snagging some of those, he may find himself replaced in the line-up with someone like Marcus Johnson, or Mack Hollins. 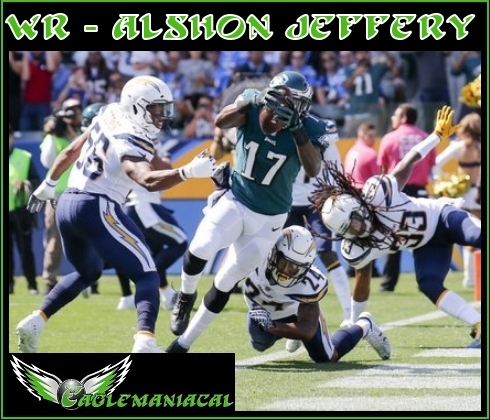 OT: (C ) A severe fall-off has taken place here. A season-ending injury robbed us of LT Jason Peters, during Week 7. In his place is second year OT Halapoulivaati Vaitai. Vaitai has been awful as a pro football player, but right now he’s the only reserve OT we have, who is at least mentally current with our playbook and protection calls. We still have Lane Johnson, but this position CANNOT withstand another blow.

OG: (C ) This position has slipped a notch. It was a “B” last quarter, but LG Stefen Wisniewski seems to be wearing down a little. He’s a feisty beast, but really he’s MUCH better suited to Center than Guard. Chance Warmack (inactive Week 7) has been used in a sort of rotation with Wisniewski. RG Brandon Brooks is handling his business. As usual.

C: (B) Jason Kelce has been solid since the coaching staff benched LG Issac Seumalo. 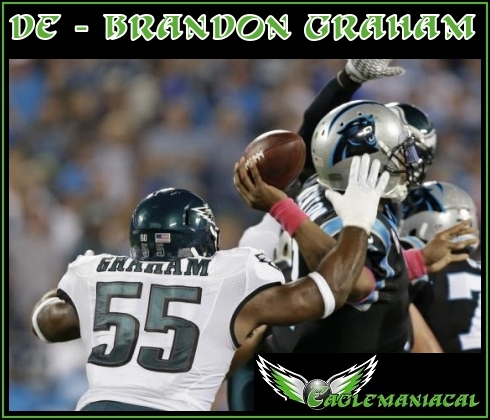 DT: (A) This position had to go a stretch without Fletcher Cox, and it still operated at a very high level. Once Cox came back, it was almost unfair. The pressure this position generates is the primary reason that the Eagles don’t need to rely on blitzing for pressure, and can reach QB’s with a four man rush. Oh, and did I mention that the Eagles own the #1 run defense in the NFL?

OLB: (B) We are horribly thin at this position, but our starters are owning the field from sideline to sideline. If they can play every game, then we’re good. If either man has to miss extended time, it could get ugly out there real fast for us.

MLB: (D) The season-ending loss of Jordan Hicks in Week 7 was a heavy blow. So now Joe Walker is the guy we’re relying on, to erase any mistakes from DE to DE.

S: (D) It took 8 games, an 0-7 team, rain and a tipped ball, for a starting Safety to register a takeaway. Look, I get it. We allow opponents to throw the ball in the middle of the field, so there are a lot of players around him to make the tackle. It keeps the offense in front of us, and doesn’t allow momentum swinging plays. I get it. Still, we don’t have to make it so easy, do we?

CB: (B) In the first quarter this position snagged 3 picks. In the second quarter they tacked on 4 more. That’s 7 takeaways in 8 games, and keep in mind, this is all being done with our best two CB’s rehabbing injuries. This is what our depth looks like. Many teams would kill for this.

LS: (A) All the snaps have looked good to me.

P: (A) Donnie Jones is flirting with his career best in net average punt with 41.5 yards. (His career best so far, is 41.7 yards per punt.) That is how you win the hidden yardage game.

K: (A) Jake Elliott is more than you could reasonably ask for from a rookie Kicker. He missed a couple of extra points in the San Fran game, but it was windy and wet. They’re kicks he should have made, but let’s not be an asshole over two TOTAL points.

PR/KR: (D) Kenjon Barner has come in and done a decent job of filling in for injured Darren Sproles. However, sometimes he carries the ball a little loose, and doesn’t clear away from rolling balls fast enough. No one fears the Eagles on a kick returns. We aren’t great at it and we’ve only returned 7 through 8 games, opting instead to settle for touchbacks.

KC: (B) Jake Elliott is continuing to improve his kickoffs. In the last four weeks, he’s kicked off 21 times and had 8 of those returned in diminishing fashion. Returns have gone from 4, to 3, to 1, to 0 last week. Hard to allow a kickoff score if the kickoff goes through the endzone.

The mission for this quarter was establishing swagger. To show that we could impose our will on teams. Guess what? We did just that. Arizona 34 – 7. Carolina 28 – 23. Washington 34 – 24. San Fran 33 – 10. Not one of those games was a nail-biter. Once we had a lead in ANY of those games, we never relinquished it.

Our young team is learning how kill it’s prey, and not let it off the hook.

Jalen Mills being more aggressive towards the ball, has netted him two picks in the last four games. Snagging passes will go a long towards making opposing QB’s hold the ball as they look for better options to throw against. This should help our pass rush immensely as the season goes on.

This quarter we have one game, then our Bye, then it’s a run of two out of three games in prime time. Those games are Dallas and Seattle. Those are conference games and could affect home field advantage.

The mission for this quarter, is to let the NFC know that the road to Minneapolis runs through Philadelphia. We need 3 of these 4 games. And one of those games MUST be Seattle. 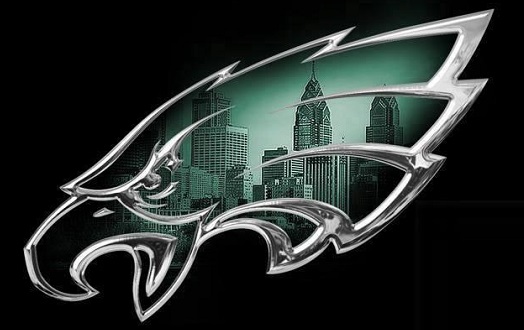