MEASURING stick. That’s what I said this game would be, and that’s exactly what it turned out to be. We learned a number of things in this game and each lesson was important. (This isn’t the place to go over them, so I’ll hit you with that in my next article, coming out either later today or early tomorrow.)

The math says that even though today we’re 4 – 4 overall and 0 – 3 in the division, we could still run the table and finish 12 – 4 overall and 3 – 3 in the division . That however, is highly unlikely. It’ll be interesting to see what the coaching staff decides to do from this point forward. Do they press forward and try to win the NFC East, or do they start plugging in more and more young guys, to get them some experience for next year. 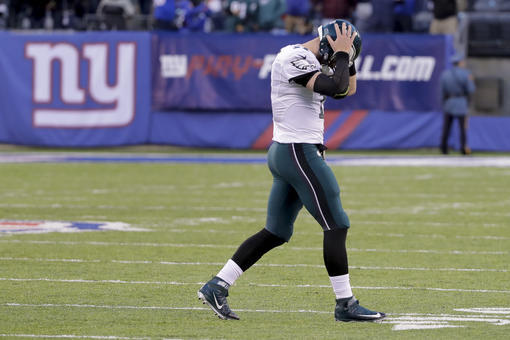 We lost 23 – 28. That’s not a big margin, and if you didn’t watch the game that might even make you think is was a good game for us. The truth is that it was woefully uneven. QB Carson Wentz is looking more and more like “a guy” and not “The Guy”. Yesterday he was intercepted twice and failed to throw a touchdown for the second time in four games. In fact, he has just 2 in his last 4 games. Also for the third time in the last four games, his completion percentage failed to reach even 58%. Statistically his regression is clear.

So, of the Four Things we were looking for  in this last game, what exactly did we see?

1) Rush five regularly. Didn’t happen. Since DT Bennie Logan went out with a calf injury, our four man pass rush has dissolved into four guys who often, almost get there. Same with yesterday. It was like seeing four Mike Mamula‘s out there. (If they gave trophies for being within arms reach of the QB, Mamula would be in the Hall of Fame.) Yesterday we brought down stationary object Eli Manning all of ONE time. NOT DONE

2) Avoid throwing Screen passes. Considering how effective the Eagles were when we threw the ball down the field, I have no idea why we bothered with these. NOT DONE

3) Some 3-TE formation would be nice. When I wrote this, it was with the intention of using this not just inside the 5. NOT DONE

4) Do the unexpected. Some of the very suggestions I made here were addressed in this last game. TE Zach Ertz is still basically being used like a big slow WR, but the play-action was better, and the ball went deep to a few guys. It was good to see. DONE

This weeks score was 1 for 4. If the giants were a better team the loss would have been by more than four. As it stands, next week we get a home game again which is a good thing. The bad part of that is we have to figure out a way to handle Atlana WR Julio Jones. Should be fun.