ONCE upon a time…

Actually the exact year was 2012. The giants had just won their second Super Bowl in fours years. Any fan, of any of the other 31 teams, will tell you that both wins were flukes. However, the giants did win both games.

That’s the part that matters. That’s what history will show.

That having been said…You know that moment, when your 2-time Super Bowl MVP realizes that he’s no longer the special one at Thanksgiving dinner? You know what that moment looks like? It looks like this: 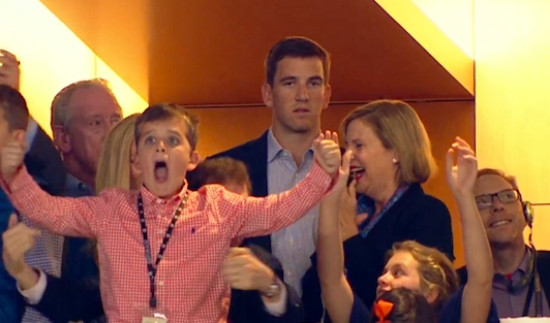 Once upon a time, it was a huge deal to be a Super Bowl MVP. Even bigger to be a 2-time MVP. But in this moment,

the player that the giants organization may one day call it’s greatest, immortalized the size of the shadow he will forever reside in. The greatest giant of all-time was reduced to a small boy, stuck in perpetual sibling rivalry. Never quite equaling up, and always chasing someone so far ahead that they never even look back to gloat.

Once upon a time the GIANTS were Lawrence Taylor, Y.A. Tittle, and Frank Gifford. Today, they are this:

They struggle mightily under him now, as he pads his stats while chasing and chasing, eternally on a treadmill, trying to out run the shadow.