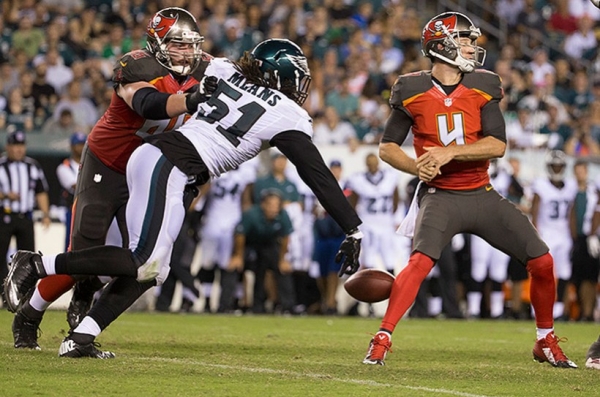 THERE were four things I told you that I was looking for in Doug Pederson‘s debut as Eagles Head Coach. The two things I wanted to see on Defense were encouraging. It looks like we are well on our way to being not just respectable, but downright dominant. Offensively, we still have some major concerns. Then again I said that we would, so there’s no reason to act shocked about that.

There were two things I liked. First, until the 4th quarter, we were absolute tyrants by not allowing rushing yards up the middle. Second, was how much Cover Two we played. We got a coverage sack, an interception, and a couple of key pass break-ups in that coverage. There were still plenty of downs where we played some Single-high Safety, but it wasn’t exclusive, and it wasn’t our base.

I said I wanted to see nine carries up the gut by the half. However, even though we looked good doing it, I counted only FIVE runs up the gut by half-time. I dunno, maybe I missed one when I went back to the kitchen to get some milk, but the point is that we were well shy of nine carries.

I also wanted to see teammates picking up a guy who was down. However, despite the goof-ups that led to our Offense being unable to move the ball the length of my coffee table, no one seemed to be too put out by their contribution to our struggle. There was no need to pick a guy up, because even though plenty of players were sucking ass wholesale out there, no one seemed upset about dropping passes or throwing passes that required a ladder to catch them. Or allowing pass rushers to race by them off the edge.

The players that stood out to me were ILB Joe Walker, DE Steven Means, DT Taylor Hart and S Ed Reynolds. DT Beau Allen was a pleasant surprise. I predicted that he’d be an early cut due to his lack of lateral quickness. However, the improved ability to push the pocket and his sheer girth could help him hold down his roster spot.

The players that looked like shit out there were, RT Halapoulivaati Vaitai, G Josh Andrews (played at C), and of course QB Chase Daniel. Decidedly unimpressive was WR/RB Byron Marshall, who didn’t seem to be able to make a single yard that wasn’t presented to him on a silver platter.

The temptation to grade or judge this team’s offseason progress, is almost overwhelming, but I’m going to hold off on doing that until after this next game. I’m going to chalk this last game (good, bad and indifferent) up to an airing out. But in the next game I expect to see growth in the following areas…