I’M DEFENSIVE ABOUT THIS LINE 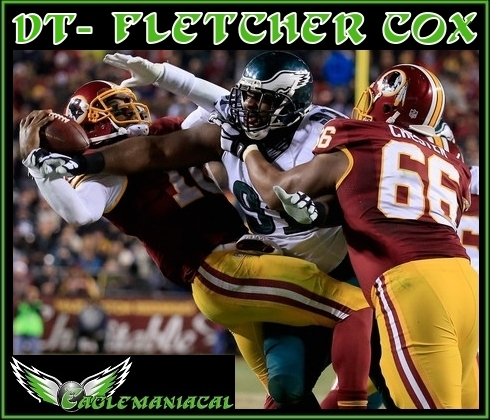 DEFENSIVE Tackle Fletcher Cox is the piece that will make Defensive Coordinator Jim Schwartz‘s system work. The Defensive Line is what will make this unit as scary as it going to be in 2016. That having been said, Cox is the difference between this being a scary Defense and it being a mid-level to upper mid-level Defense. However, that’s by no means an attempt to slight anyone else on the Line.

DE Vinny Curry is virtually unblockable one-on-one. There were flashes of that of that even before Andy Reid was fired. For three years Reid’s idiot replacement relegated Curry to being a part-time player, and so Curry has never started a game in his pro career. Never. This is despite outproducing the starting starting DE’s in sacks, in two out of his four years in the league, including 2014 when he led Eagles linemen with 9.

DT Bennie Logan is not as much a pass rusher as he is a pocket collapser and a run plugger. Playing NT in the prior regime’s “Multiple 3-4” front, Logan was frequently the subject of interior double teams against which he still more than held his own.

Due to each lineman’s 2-gap responsibility sort of holding them in place, it was easier for blocking schemes to key on our linemen. Many of the plays made by our lineman were through sheer effort and/or talent. Schwartz’s system will not hold the linemen to static gap responsibilities and will allow them to create. This will mark the first time in any of their careers that the scheme will act to help them as players.

The RDE spot will likely go to Brandon Graham who is coming off his best year as a pro, but still hasn’t shown to be the guy we were all hoping he’d be. Whether it’s been the system or injury, the situation just keeps seeming to not quite fit him. Now with Schwartz’s system relying on the Wide 9 technique, it almost seems like Graham is set to repeat his 2012 season if he stays healthy, or his 2011 season if he doesn’t.

The dark-horse to win that spot is Connor Barwin. He has the bigger contract and recent production on his side. However he also has a dismal history of playing with his hand on the ground in the NFL. It would be nice if he surprised me, but I, and many a number of media sources, (and here are some examples: Exhibit A, Exhibit B, Exhibit C) feel that the time to move on from Barwin was this offseason, because he’s not a natural fit in a 4-3. Even Barwin himself is reported to have some questions about how he’ll fit, even going so far as to have requested to be traded to San Fran, where he’d reunite with his former Eagles coach.

When you look at this group there’s plenty to be excited over. It’s not hard to envision this being Year One of a great, young Defense that will act as the team’s backbone for years of deep playoff runs. Which is why it’s important not to dick around with Cox’s contract.

Look, if we’re going to keep him, we’ll have to pay him at some point. What he wants now is ridiculous, but it won’t get any lower after this year. Especially if things go as they should. Cox will cost some team an arm and a leg. The only question is: Will it be us?

While we could always let him walk after 2016, and get a shiny new rookie, you have to weigh the concept of the Mississippi native in a Cowboys jersey in 2017. (You saw how fast they jumped on Cedric Thornton this year.) We can hope the Eagles postpone paying him and hope he doesn’t have a great year this year. (Ugh!) Or we could bite the bullet and realize that at this point the Eagles need him more than he needs the Eagles.

We have some nice players on this Defensive Line, but Cox is clearly the best of them.