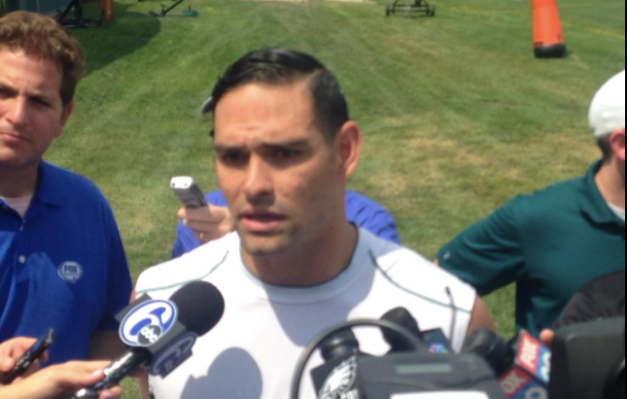 QUARTERBACK Sam Bradford’s knee has to be of some concern to you now. I know during the offseason and preseason many Eagles fans seemed convinced that there would be no issue with Bradford’s knee. That he’d start 16 games, while never throwing a single incompletion, on his way to being something other than the guy he’s been as an NFL QB. I’m not sure if that was naive optimism, or just grown people with a 6 year old’s understanding of the human body.

I on the other hand, wrote an article talking about the knee and how the Offense might look different with Bradford out there. Most of what I wrote was centered around the fact that the Eagles average 35 pass attempts per game under the current head coach. I wondered openly, just how long that knee would take the pounding of simply planting on that knee to throw.

Well in Bradford’s first game as an Eagle, he attempted 52 passes. This is in contrast to just 16 rushing attempts (as a team), all game long. Put down your calculators, that means 76% of the plays called were for passes; on what I keep being told (but not shown) is a run-first team. In a 2 point loss in a game that was never out of control, there was no reason to abandon the run. None. That many pass attempts also didn’t help Bradford, seeing as he was hit 8 times in the pocket in that game.

While his often discussed ACL injuries weren’t the direct result of being hit, his shoulder injuries were. Given his lack of real mobility, he’s a sitting duck if the interior Offensive Line doesn’t do a better job of giving him an area to safely step into.

In one of my fantasy leagues I drafted Mark Sanchez (very late), because I fully believe that Bradford will be shelved at some point this season. I was originally thinking it would be Week 9 or 10. However, if the play selection and/or the pass protection doesn’t get better soon, I’d say Mark Sanchez will start Week 7 or sooner.

12 comments on “MARK SANCHEZ WILL START”