BOYKIN KELLY TRADE, OR WHAT?

BRANDON Boykin was never going to be a starter for the Philadelphia Eagles. Even after a game in which Bradley Fletcher was doused in gasoline and left to burn out of control; Boykin (and our other CB’s) continued to ride pine and saw no opportunity to show an ability to step in and possibly save the team from spending a high draft pick. So the idea of Boykin being traded (for a conditional 5th round pick) was hardly a surprise.

Actually, while it didn’t come as a surprise, the move still stuns a bit. Especially on the eve of Training Camp. Boykin was one of the few players that seemed to get the fans here. He talked big, but he also played big. When he made mistakes on the field it was due to him gambling for that big play. He wanted it as bad as we did, and we SAW that in him. Even in limited play, his fire was as plain as day.

Over these last couple years it feels like we’re losing all of our high-spirited players. Most of the guys we’ve lost were big talkers, but also big performers. What’s funny is that fans from Philly often shake their heads at players and say stuff like “Why can’t he just shut up and play?” or more frequently “He needs to shut the fuck up and just play!” That cracks me up because here in Philly, we’re talkers. (Especially when we deliver results.) I think the Boykin trade is hitting fans the way it is, because to us Boykin felt like Philly. Remember when he tweeted this: 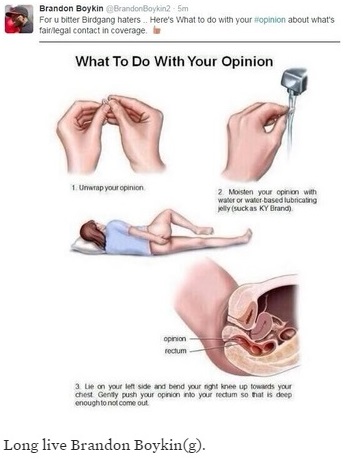 This is the sort of thing he did that made us love a second string player.

In a weird way it seems like the more Philly-like you are, the less this coach wants you on his team. (All the Oregon and PAC-12 guys he adds to the team, does nothing to combat that image either.)

Frankly I’m going to miss Boykin, and I think he’s going to shine as a Steeler. How much I miss him will depend on how well the young CB’s on our roster play. The way I see it we just made a mistake. We gave away a 25 year old starting caliber CB, for a 5th round pick. The sad thing is, this move was hardly a surprise.

2 comments on “BOYKIN KELLY TRADE, OR WHAT?”