WISHING HTTR (HELL TO THE REDSKINS) 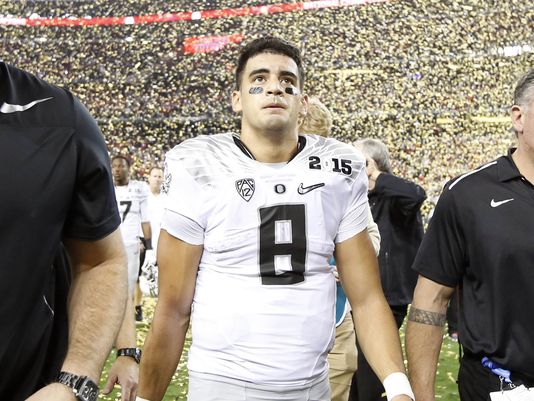 RUMOR has it that the Washington Redskins will take Draft Prospect QB Marcus Mariota if he’s available at number 5. That would be AWESOME! It would be the biggest joke in sports history next to the Buffalo Bills “4-peat of Shame”. Quite frankly, I wish there were something I could do to help this happen.

First, I don’t want Marcus Mariota to be an Eagle. I feel like he’d be pretty good under Charles Kelly’s system, but the second Kelly packs up and heads back to coaching college, we’ll be stuck with a QB who doesn’t really play NFL QB. My guess is that we’d be stuck with Mariota well beyond Kelly’s tenure as head coach

Second, Washington traded away their 1st round picks in 2012, 2013, and 2014. If they select Mariota in 2015, they will have spent 4 straight years, spending 4 straight 1st round picks, on just TWO quarterbacks, while never patching their other obvious holes.

After watching how brilliantly former Spread system QB Robert Griffin performed in the offense they ran there last year, of course the thing the ‘skins need the most in the world is another Spread QB. I would consider it a personal favor to me if the ‘skins could show that level of stupidity on April 30th. I’m even willing to write a check for $100, to chip in towards Mariota’s signing bonus. Anything that contributes to the continued mediocrity of a division rival is fine by me, because there are three ways the Eagles could win the East this year:

I’d be happy with any one of those. And I think Mariota becoming a Redskin is a step in the right direction for our franchise.