THE FUTURE IS NOW FOR MARK SANCHEZ. 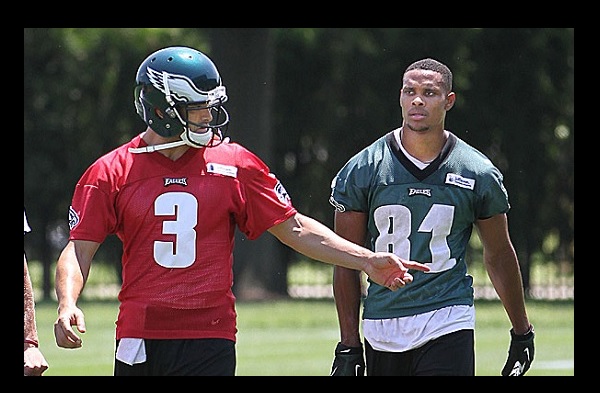 TODAY I won’t keep you in suspense. No, Mark Sanchez isn’t being seen a as long-term replacement for Nick Foles. So why (you might ask), the hell is he here?

Let’s first look at the obvious. If Foles goes down, there’s a veteran presence out there who’s had some career success. Should Sanchez light it up, if you think that Chip Kelly won’t stay with the hot hand, you have not been paying attention to how fluid our QB position has been since Kelly was hired last February.

Think about it. The 5-man QB competition; starting Michael Vick; starting Foles; cutting Vick; signing Sanchez; elevating G.J. Kinne (one of last year’s 5 competitors) from the Practice Squad to the Active Roster, and giving him a shot at being the #2 and one hit away. That’s a lot of movement for 17 games, especially at a position where you only play one guy at a time.

Now for the not so obvious. What Sanchez is, is a human cattle prod. He’s the obstacle between Foles and a HUGE payday at the end of 2015.

No Sanchez, and maybe we have to rely on Matt Barkley if Foles goes down. If Barkely is what he was last year, Foles loses no bargaining position. If Barkley pulls a “2013 Foles”, then people still aren’t sure about him (and will want to see more), but the Foles contract still looms, so you have to play it safe and therefore Foles is still in the driver’s seat for 2015.

However if Sanchez has to step in AT ALL, the numbers on Foles’ contract immediately start sliding backwards. Sanchez is veteran enough to keep us competitive if the Defense is decent, and god forbid he gets hot. At that point Foles loses leverage at the bargaining table. (a la Bob Dobbs without his grin.)

Howie Roseman came to town showing that he wasn’t Joe Banner by throwing money around like all he had to do was print more in the back. However, with the looming belt-tightening coming, (due to his fiscal carelessness), look to see a much more tight-fisted Roseman going forward. He has to play more hardball now. In a year or so when you’re asking “Why don’t they just pay Foles?!” this will be why.

Sanchez isn’t an insurance policy, or a long-term plan. He’s the Front Office’s way of saying to fans, that regardless of what happens in 2014, they did go out and get us a vet with playoff experience. He’s the F.O.’s way of saying to Foles, that he can’t fall back on hoping that Barkley sucks if he misses time. Sanchez is a cheap fix to an expensive problem. So for him, his future with this team is now.