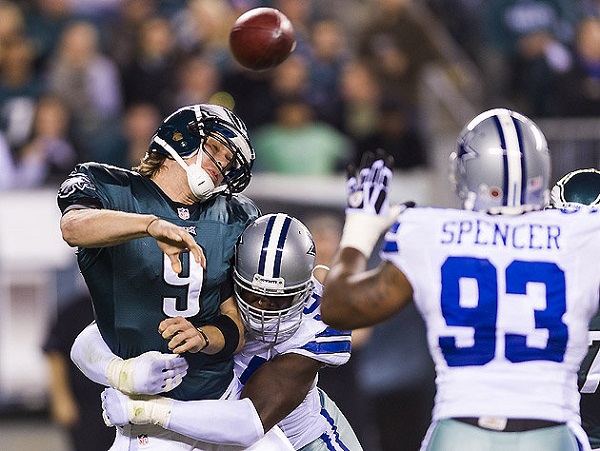 SOMEONE in an Eagles group I belong to, pointed out an article (written by another Eagles fan) that summarizes how one Redskins fan said he would stop Chip Kelly’s offense. The summary made the ‘skins fan sound like a moron, and I had a laugh; but then I thought “an Eagles fan did do the summary”. So I went to the source material to see it for myself.

I’m glad I did. I have to say, there was a lot of sound research and football knowledge on display there. Nothing the guy said was technically wrong, and he made some of the points that I made when I did a breakdown of why we were so successful last year. The only problem with his “blueprint” was that he put in too many moving parts.

So how would I do it?

Step one to stopping someone, is understanding what they do. What do the Eagles do? We run the Spread. Okay so what is the Spread?  The Spread is a system that typically uses a 3 WR formation (sometimes 4), to spread a defense horizontally, so it can force man coverage concepts that open up the middle of the field for short passes and the run.

What Kelly added to this system was a frenetic pace, and the constant employing of “the mesh” which basically is a legal way of running a ‘pick play’. (If you want to know more about “the mesh”, Sheil Kapadia has an excellent article on it.) Kelly also tweaked the system a bit by frequently using TE’s in the place of slot WR’s, though they are mostly used as receivers and not much in pass protection. So the Eagles typically pass block with just the 5 O-linemen, with a touch of chipping or slow releases.

Back in the 1990’s there were already 2 teams heavily employing the Spread: the Houston Oilers and the Atlanta Falcons. Back then however, everybody called it the Run and Shoot (RAS).

Both the Falcons and Oilers scored a ton of points using this system. Neither team had a TE of note from their RAS days, primarily because they almost never used one. Even in the run game. The result was a lot of hits on the QB. The sack numbers for QB’s Warren Moon and Chris Miller really don’t tell the whole story. Miller had the misfortune to play in the same division as Pat Swilling and Rickey Jackson (Saints), Kevin Greene (Rams), and Charles Haley (49ers). (If you aren’t familiar with those names, look them up.) There were a lot of late hits and free runs to the QB. Miller missed quite a few games.

What I’m saying is the Spread is expensive. It requires you to gamble with the most precious resource on your team: Your starting QB. It’s why you don’t see a lot of it these days. For example: Bill Belichik has been recently borrowing concepts from Chip Kelly. Now take a look at Tom Brady’s recent sack numbers and completion percentage. However Brady’s recent TD/Int ratio indicates that Nick Foles (or another QB) may be able to produce similar numbers in this system.

Once more: The Spread is the Run and Shoot. Kelly’s version is run at a faster pace, while getting as close to cheating as possible without justifying the flag being thrown. That’s our Offense in a nutshell.

So then how do you stop it? Simple. Play some Cover-2 and consistently send 6, (since the Eagles typically block with 5). It’s Jim Johnson 101.

That’s it. Really. You don’t need 80 steps like what’s listed by our Redskins friend up there, just 2. Make sure the hit is delivered (even if it’s late), and make the tackle on the short completion.

That’s it. It’s not easy, but it’s simple. You make it a game of attrition. Because limping QB’s can’t run the hurry-up, and scared QB’s rush their passes, or get flagged for intentional grounding. (Remember those?)

It was this formula (and everyone running some version of the WCO) that ran the RAS out of the NFL. And as I said in another article: If I know this, you can bet NFL DC’s do too.

10 comments on “STOPPING THE EAGLES OFFENSE IN JUST 2 STEPS”