WE need to play a slightly more smash-mouth style now.

In 2017, at RB we had LeGarrette Blount, Darren Sproles, and Wendell Smallwood. That was the pecking order we started with. Power up top, and dynamic changes of pace behind. 250 pounds, 190, and 208.

Then we lost Sproles in Week 3, and Smallwood fell out of favor after Week 7. Corey Clement ascended, and we traded for Jay Ajayi, both in Week 8. At that point our back-field looked like Ajayi, Blount and Clement. 223, 250, and 220. See the shift? It was a bigger, more physical group from top to bottom.

Whether or not Blount or Sproles is back in 2018,  the offensive playbook for this year, can’t be written for last year’s roster. Not if we’re going to use our players to the best of their ability. An offense should be tailored to the roster, not the roster to the playbook. We adapted on the fly last year, but this year we need to tailor to our strengths.

During the prior two seasons the Eagles Offense was coached by two former QB’s in Head Coach Doug Pederson and former Offensive Coordinator (now Colts head coach), Frank Reich. It was a fast-paced, wide-open, QB friendly style, underpinned with fundamentals that both coaches knew would work reliably at the NFL level.

That’s gone now. Offensive Coordinator Mike Groh has never been an NFL QB, so the viewpoint will be different in terms of play design. Experience isn’t something that can be faked. You either have it or you don’t. So, instead of trying to be something we aren’t quite any more, the smartest play would be to adjust to who we are in 2018. 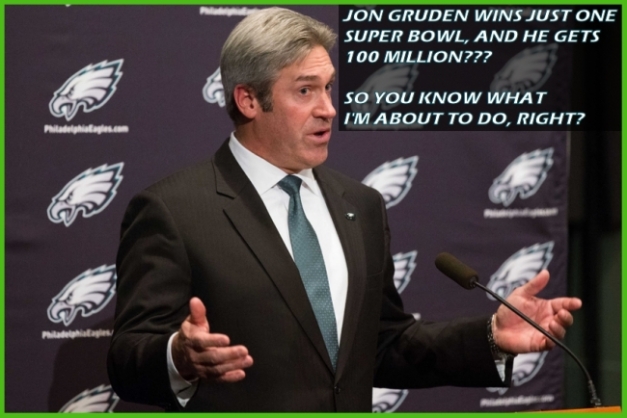