(Disclaimer: I did not see the 4th quarter. I was stuck on 676, and then the 30th Street Station exit, trying to get a loved one to their bus back to D.C. )

There was a point this year, where we won games if the Offense could score 30+ points. Now we’re at a point where even 31 points isn’t enough against a team like the Dolphins. The longer DC Jim Schwartz is in Philadelphia, the further we will get from ever seeing another deep playoff run. 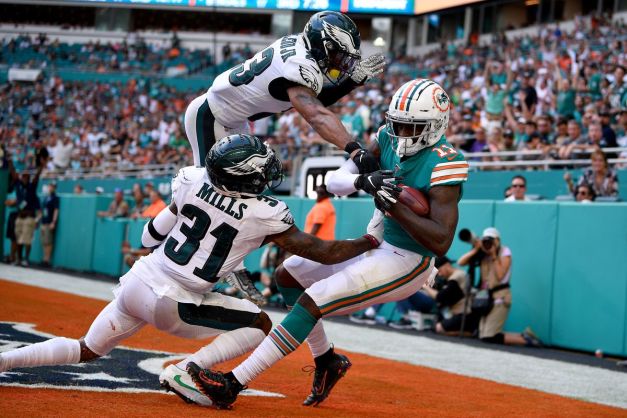 This is what happens when you don’t re-route a WR early in the play.

The Defense thinking that the game opening interception was enough, packed up and went to the beach after the opening drive. Jim Schwartz wasn’t so much out-coached, as he was more shown that his scheme is an obsolete, propped up gimmick, that even bad teams can beat, because it’s more philosophy than well thought out concept.

Alshon wills his way into the endzone. We need him back in 2020.

1) Show up and show out: The Offense showed up. Alshon reminded people that when he’s not gimpy, he’s still very much a problem. Agholor showed us a little of what he can do with the ball in his hands. Sanders displayed a promising amount of poise and stability for this Offense today. My hat is off to those guys and those efforts.
By and large though, everyone else either did their job merely adequately, or didn’t show up at all. (NOT DONE)

3) Show ‘em something new: Wentz threw a checkdown TD, and the staff got him out on more bootlegs this week. Aside from that, we more or less ran the same stuff we always run. (NOT DONE)

4) 1-2-3 THROW!: Wentz didn’t hold the ball too long for the most part. I was most impressed by an early throw to WR JJ Arcega-Whiteside (1 – 15 – 15.0 – 1) that fell incomplete because JJAW didn’t get open soon enough. Wentz put the ball on him anyway, and that sort of said to the kid “Get your ass open early.” (DONE)

That brings our Four Things score for the week to 1 of 4, and the yearly tally to 23 of 48. Next week the giants visit the Linc, and I can’t wait to see what sort of weird, trick play, touchdown we get beat for in that one! (My money is on a Sweep and lateral to the Center.) 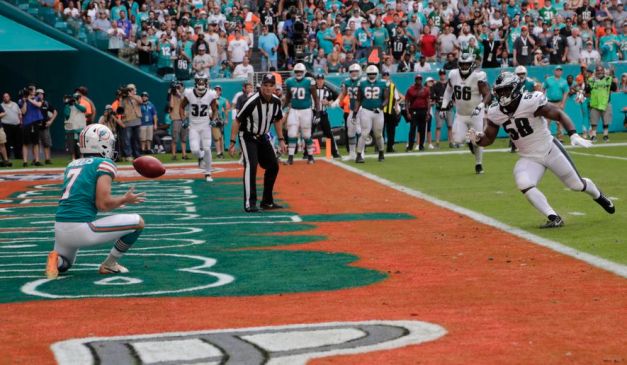 Let’s not insult our own intelligence on this. There is no way a team like the Dolphins should score 37 points. Anyone looking beyond that, is trying to ignore a fire in their lap.

The Eagles lost because our Defense can’t stop the pass. Not couldn’t, as in “just this game”. Can’t, as in “this has been an ongoing problem for three years now”.

I keep writing paragraphs and cutting them out, because they’re less about this game and more about the over-arching problem here. I’m left stunned that the problem was so simple, and yet no one could figure out a way to counter it.