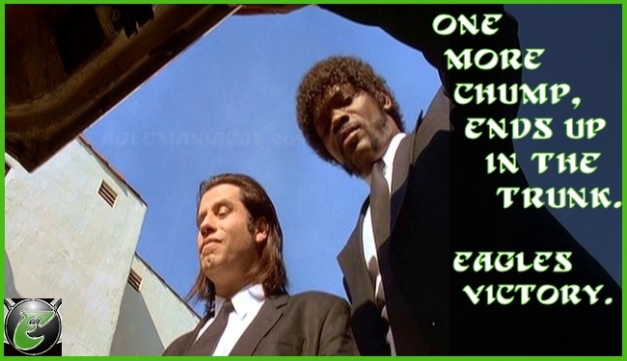 FOR anybody who thinks less of Head Coach Doug Pederson’s ability to call a game, since the departure of Frank Reich, I present for you, Doug’s hairy ass to kiss. It may take a couple of days before you see this said elsewhere, but Doug just put on one hell of a coaching exhibition. 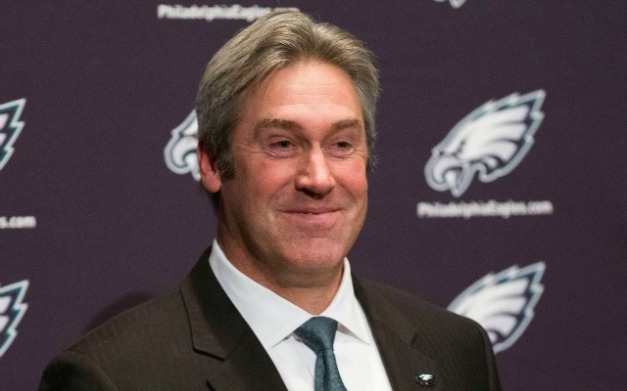 It’s one thing to be 3 – 4, and put together a game plan to beat a 5 – 1 home team. It’s quite another to have to totally adjust on the fly, due to weather conditions that favored that 5 – 1 home team, and still beat the hell out of them. 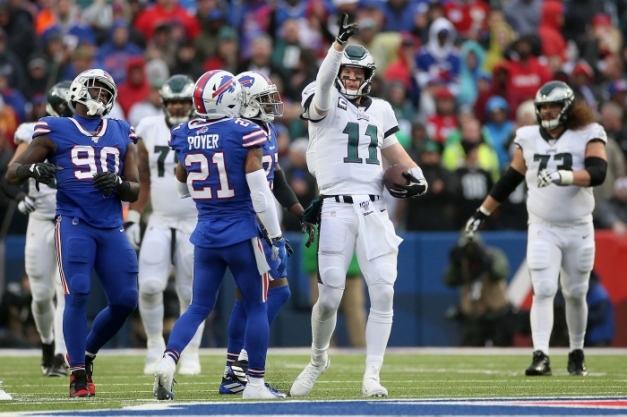 Defensively, DT Fletcher Cox (4 – 1.5 – 0 – 1) put the interior on his shoulders, and looked to terrorize early on. LB Nate Gerry (5 – 1 – 0 – 0) was moved outside where he was able to make an immediate impact on our defensive speed. The stat sheet won’t show the plays made by SS Malcolm Jenkins (5 – 0 – 0 – 0). Given how much heat he was under this week for comments (largely true) made by a former team mate, he needed a game like this.

1) Play sound Defense: With the exception of a couple of hits that should have been wrap ups by FS Rod McLeod (4 – 0 – 0 – 0) the Eagles played very solid football. Gone were the million swipes at a ball, instead of getting the man on the ground. Plays on the football in the air, were crisp. Edge containment in a four man rush remains an issue, but that would solve easily by bringing five more often.

We did give WR Cole Beasley (3 – 41 – 13.6 – 1) a 14 yard scoring catch, while in Single-high, but we seemed to get it together after that, playing what looked mostly like a loose Zone. We got burned on a blitz using that. It has definite red zone potential, but were weeks away from it being playoff game ready. All in all, we did what we needed to here. (DONE) 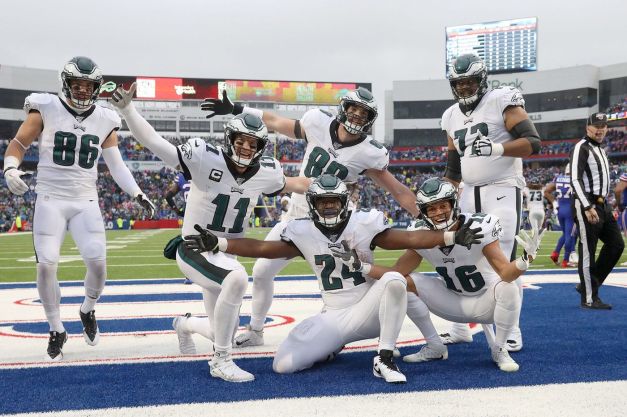 3) Move Gerry outside: This happened. I was surprised when I saw the starting line-up had LB Nate Gerry at OLB instead of MLB. Rookie LB T.J. Edwards (1 – 0 – 0 – 0) instead got the start inside. This is exactly what I said we needed to do, and it yielded the results that I suspected that it would.

Edwards didn’t look very good, but he’s a rookie who is more familiar with being a traditional 4-3 MLB. The Wide Nine concept we play moves the MLB around much more, and pulls him out of the middle of the box. This is largely why the Bills QB was able to motor-motor putt-putt for 44 yards on 8 carries.

No matter. Gerry made play after play on the perimeter and that was the point. Move him from being a glaring liability to a decisive advantage. (DONE) 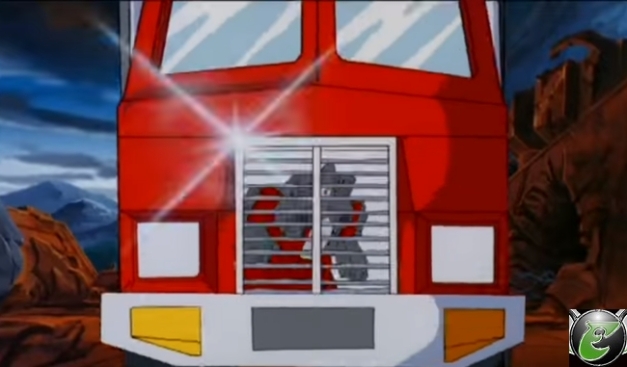 4) Let’s be assholes: The idea was to tire out their big guys in the middle, and then hit them with the power run game later. What did we do? Well, shit. You’d think I wrote the Eagles game plan this week.

We came out with a no-huddle. We ran Agholor on a jet-sweep. Hit Sanders with a neat little Screen pass. All in the first quarter! By the time we started hammering them with Howard, he was Optimus Prime mowing down defenders as the reflected off his grill. We not only did this, we did the hell out of this. (DONE)

This weeks Four Things score is 3 of 4. That brings our annual tally to 15 of 32. That’s still a sub .500 mark, which explains how we’re sitting at 4 – 4 halfway through the year. Next weeks game against the Bears gives us a chance to get over .500 in both regards. We’ll see how it goes.

The 31 – 13 score looks way more dominant than it actually was. We nearly went into the half down 3 – 7, until a stupid mistake by Buffalo, led to our first touchdown of the game. We were up to our standard of play for the third quarter, and by the time the smoke cleared, Buffalo’s lack of offensive talent was looking at an insurmountable 13 – 24 deficit.

Looking at the game honestly, there were a number of things to be concerned about if you’re an Eagles fan.

For instance, how is Nelson Agholor the second best WR on this team? Doesn’t that have to mean that everyone beyond him is absolute trash? If we have better than, or equal to Agholor, then we need to start seeing that motherfucker get 4 or 5 targets in a game.

This isn’t to say that I’m unhappy with this win. It IS to say that with 8 games in the books, the playoff push is officially underway. It’s a subject now. Not so much seeding, not home-field advantage. But division leaders and wild cards, are definitely up for discussion now.

If we’re to get into that discussion, we need to tighten up some of these issues, tout suite.