WE need to get to opposing QB’s more. Not pressuring them more. Not just hitting them more. We need to get actual sacks. While the Eagles will never be a blitz-heavy team under Defensive Coordinator Jim Schwartz, he needs to turn it loose more often. (Told you I’d bring it up soon.)

The theory is that hurries should create interceptions, the reality is that sacks often do create fumbles. Also, sack-fumbles are easier to turn into defensive touchdowns than interceptions are. Here’s an example of how immediately a sack-fumble can affect a game’s outcome: 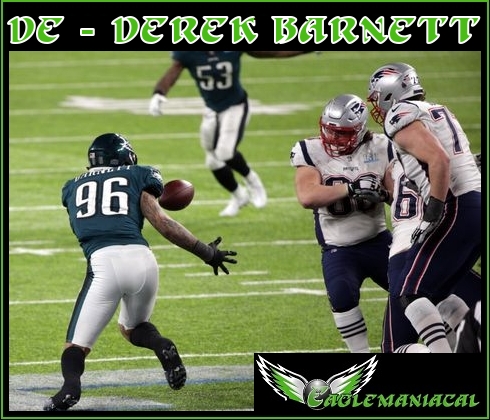 Opponents have realized that our bark (hurries) is a lot worse than our bite (actual sacks). As a result, opposing QB’s are standing in those pockets, with total faith that they’ll have time to get the ball to an open man. And we keep making them right for doing so! We too often, don’t make teams pay for doing that.

This monotonous four man rush, has yielded some highly mixed results. Before you mention that we went 13 – 3 and  won a Super Bowl with this system, keep Four Things in mind:

3) We gave up an all-time record number of passing yards in that Super Bowl win.

4) If it wasn’t for that Super Bowl’s only sack (sack-fumble), we may have allowed a comeback.

So let’s not get cocky about our four man rush. It’s praised for it’s hits, but it generates an awful lot of misses.

We need to turn up the heat. And we need to turn it up more often. Like the Bears did last year getting 50 sacks and keeping opposing QB’s to a rating of 72.9. (That’s not a typo.) They got sacks from everywhere, including 6 from their secondary.

Settling for hurries with these simple four man rushes… It seems like teams have figured us out. It’s time to adopt and adapt new tactics.

We need to blitz more.