WELL how do you like that? Seems we went out, and locked up a first round bye in the playoffs. Bully for us! It was by no means the best showing from this team defensively, but we have time to fix that. 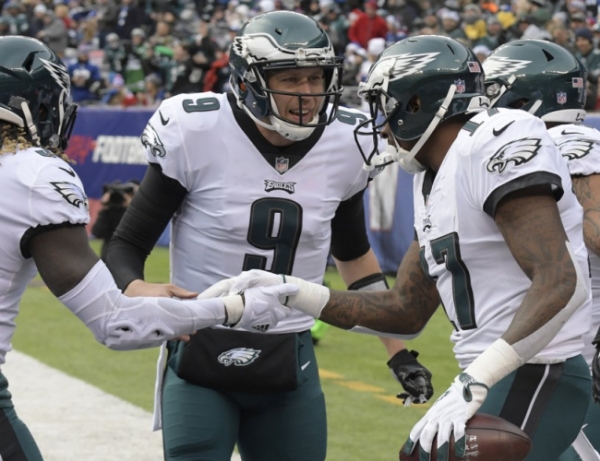 Let’s get to it! QB Nick Foles (24/38 – 63.1% – 237 – 4 – 0) came out and put a bullet in the notion that he’s not a force to be reckoned with. Let me frame this up. While the Eagles did give him plenty of support running the ball (26 called runs to 38 passes), Foles put on a clinic while hitting four different receivers for scores. It was a real team effort on Offense, as no Eagles rusher or receiver produced more than 59 yards on the day.

While newly re-added LB Bryan Braman added nothing to the stat sheet, his very presence seemed to energize the Special Teams. They recorded a punt block, a field goal block and an extra-point block, all in one afternoon’s work.

Before you start panicking about the 434 passing yards we gave up today, consider that it was on 57 pass attempts, balanced against just 23 rushes. The giants spent the entire day red-lining their offense’s engine, and still came up short vs an Eagles Defense that never seemed to feel a sense of urgency.

3) Set the edges: We actually did very good job of containing the giants run game. We gave up just 75 yards for 3.3 per carry, with their leading rusher finishing the day with just 39 yards. That becomes hard to notice however, when your opponent throws damned near 60 passes in less than 30 minutes of possession. (DONE)

4) Go for it: While we did go for a 4th down conversion, we didn’t get it. It was great that we went for it, but we needed to convert that. Until we do, it’ll seem like we can’t. This will give opponents confidence facing us on 4th down and 3rd and short. (NOT DONE)

This weeks Four Things score is a close 3 of 4, with our overall numbers being 43 of 56 (76.7%). Next week features a prime-time, Christmas Night match-up with the Oakland Raiders. Wouldn’t surprise me in the least if we pulled our starters after the half. In fact, that might be wise.

This was a game that featured a lot of character. While many people will only see the 5 point difference in the final score, they’ll be missing the larger and most important aspect of this win. At one point the Eagles were down 7 – 20. That’s a 13 point deficit erased and converted into a 5 point lead.

While Nick Foles was the straw that stirred the Offense’s drink, this was a team effor effort, it’s a team concept. The Eagles are a team.

Like Police or Fire Fighters, there is no one man who stands above the others. Instead they rely on each other. That’s why we are who we are. That’s how we got here and it’s how we’ll get further.